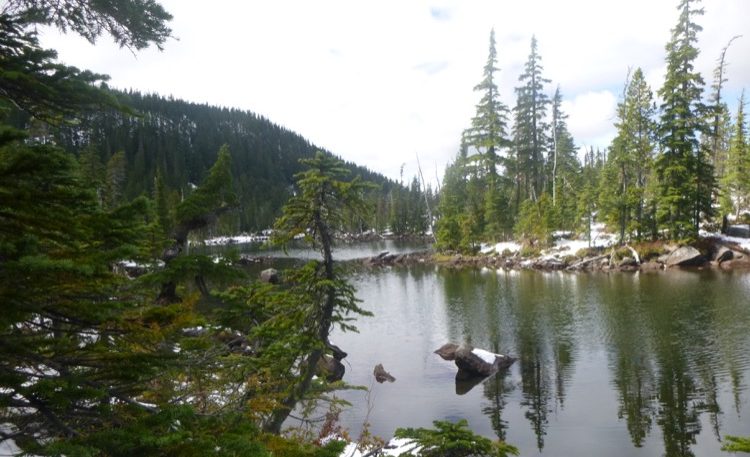 Mountain Lakes 100: Smoke and Fire Turns to Ice and Snow

The run-up to Oregon’s Mountain Lakes 100 was a roller coaster ride of wild fires, closed access roads, inaccessible trails, and the very real possibility that the race would be a no go.

Just two weeks out, the race directors updated us with this, “Todd and I spent the whole day on the course… The smoke conditions were pretty much the same everywhere; not good.” The accompanying photos were devastating, showing thick smoky haze obscuring everything. No running was going to take place in that air and there was still the question of roads even being open to get there and trails not actually being on fire on race day.

But from that point, conditions steadily improved. Cool weather tamped down the fires, roads opened back up, the course was rerouted but largely kept intact, the air cleared, and race day dawned bright and brilliant with stunning clouds floating over Olallie Lake. Towering Mt. Jefferson, Oregon’s second highest peak, stood resplendent in the distance. Todd Janssen and Renee Seker had held faith, done a mountain of contingency planning, kept us all informed, and then delivered a first-class event on race day. After all the angst about the smoke and fire, the big surprise ironically turned out to be snow and ice. 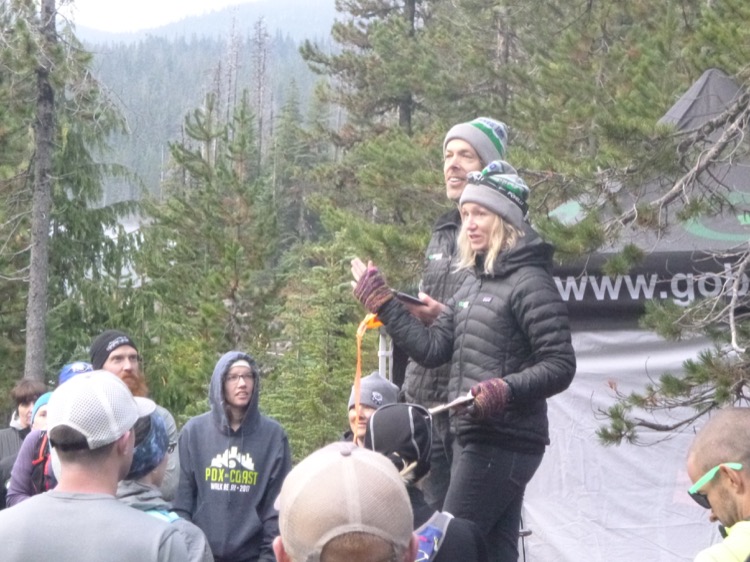 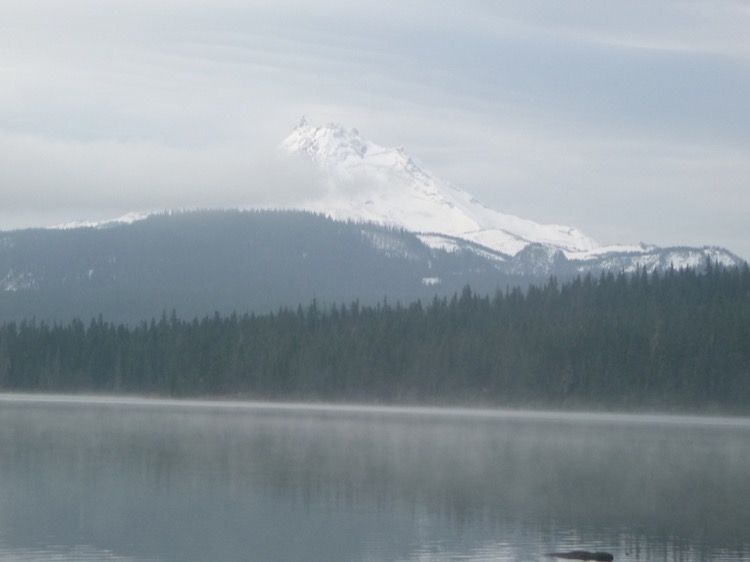 Snow-clad Mt. Jefferson looms over the start/finish at Olallie Lake.

A defining aspect of this race is location, location, location. Deep in the Mt. Hood National Forest of the western Cascades about 100 miles southeast of Portland, the Lake Olallie Scenic Area and the Warm Springs Reservation is an old-growth forest wilderness of fir, hemlock, cedar and pine trees with lakes small and large sprinkled everywhere. The drive to the start/finish at Olallie Lake Resort is over miles of pot-holed dirt and gravel roads. The route from Government Camp to the north, for example, follows forest road 4220 which is literally flat ground between trees, no shoulder, no separation from the forest. A single downed tree would have blocked the whole thing. In the predawn darkness, it was like driving to the race through the Blair Witch Project.

Mount Jefferson (10,497 feet) and Olallie Butte (7,215 feet) dominate the region. Jeep road and single track take you around the big lakes, Olallie and Timothy, but there are numerous small lakes buried in the forest. If the lake had a name, it was carved into a single wooden plaque: Triangle, Lower, First, Head, Horse Shoe, Spoon, Surprise, Fish, View, Top, Fork, Upper, Cigar, Timber, Red, Wall, or Sheep. The course flows up and down between 3,000 feet and just under 6,000. The grades are not steep and most of the trail is smooth and wide so despite a little bit of elevation and the rugged terrain, it is normally a fast course. An initial 20 miles of unexpected snow and ice, however, made for slow going all morning and into the afternoon and brought the finish rate from a historical mid to upper 70% down to just 53%. 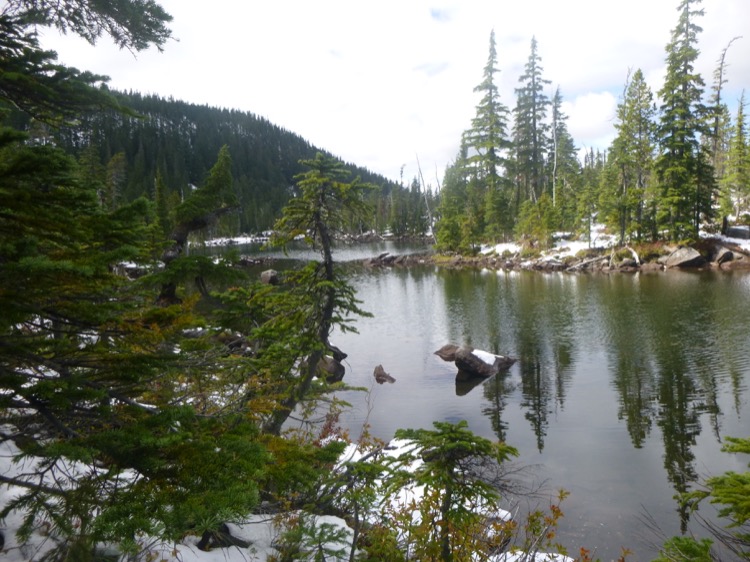 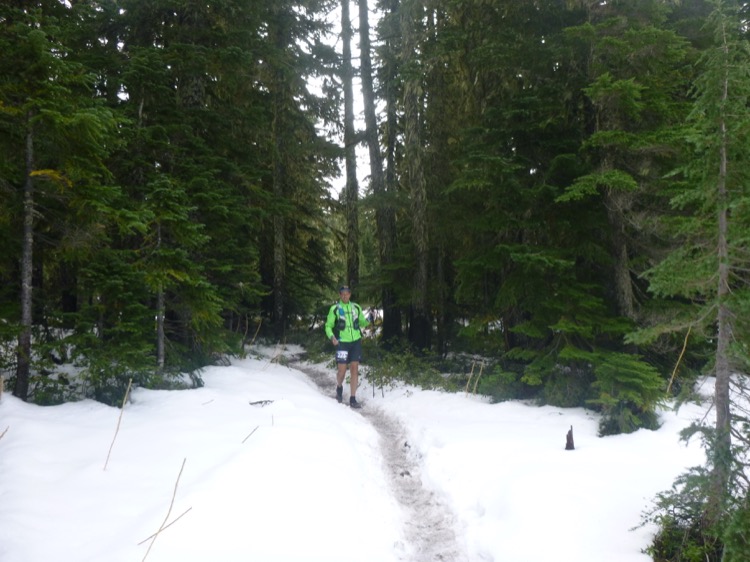 The snow was beautiful, making for miles of forest winter wonderland, and the frozen-over small lakes and ponds looked like backdrops for fairy tales, but there were conga lines of runners trying to pass by each other on out and back segments in little six-inch wide troughs of snow. And later in the day when the dry snow and ice turned to slush, you had to make your way over treacherous rocks and then wade through long icy footbaths. That part was hard, slow work.

Returning to the start/finish, changing into dry socks, working the drop bag, and recharging with some solid food after leaving the snow behind made it seem like we were setting off in a new race for the last 75 miles. This time we traveled north through the forest and the Olallie Meadows on our way to a big loop at night around Timothy Lake where we found an incredible string of lights marking the dam and the most distant aid station. On the way there and back, we visited the historic Clackamas Ranger Station aid station which included drop bag access and terrific support from upbeat volunteers. 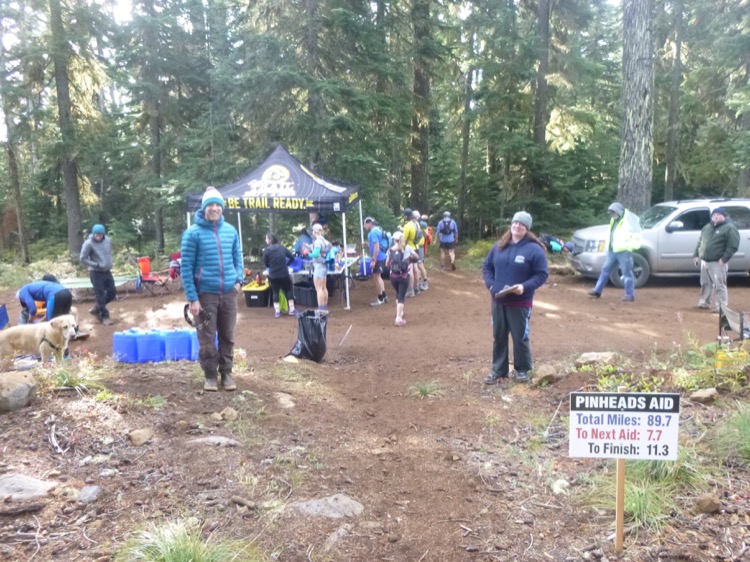 Support throughout the race was exceptional. I now associate plates of bacon and potato-stuffed pierogi (Polish dumplings) with racing in the Northwest. As Mark Twain might have said, and maybe he did, you couldn’t swing a dead cat without hitting some bacon and pierogi. The swag incidentally included a brand new pair of neon orange Nike Trail shoes for every runner! That was unique along with the trail markers that were little round orange discs with reflective strips attached at quarter mile intervals. Getting lost was a non-issue.

The course performed a little mind trick on us at the end. Because we had remembered climbing up away from the start/finish initially, we imagined the final 3.6-mile stretch from the last aid station to the finish was all downhill. In reality, we climbed, trotted along a flat section, climbed, flat, climbed endlessly, and when we finally got to the downhill, we could look down the tiny slope and see people in camp chairs sitting on the road just yards from the finish. The 3.6 miles of downhill was actually about 0.1 miles of downhill, and I should have known better than to trust my thinking at the end of a 100-mile race.

The race directors were at the finish line to hand out the buckles personally with handshakes and hugs. They looked proud of their event, which had been in such jeopardy. Kudos to them for pulling it all off, including a huge post-race breakfast.

The Mountain Lakes 100 is a real wilderness event. The accommodations near the start at the Olallie Lake Resort are either rustic or flat-out camping. The nearest towns of Detroit and Government Camp are mountain towns through and through, picturesque and fun to poke around in. Both have hotels and a selection of mom and pop restaurants. It all makes the race a real getaway, a weekend away from it all, and a very, very long walk in the woods.