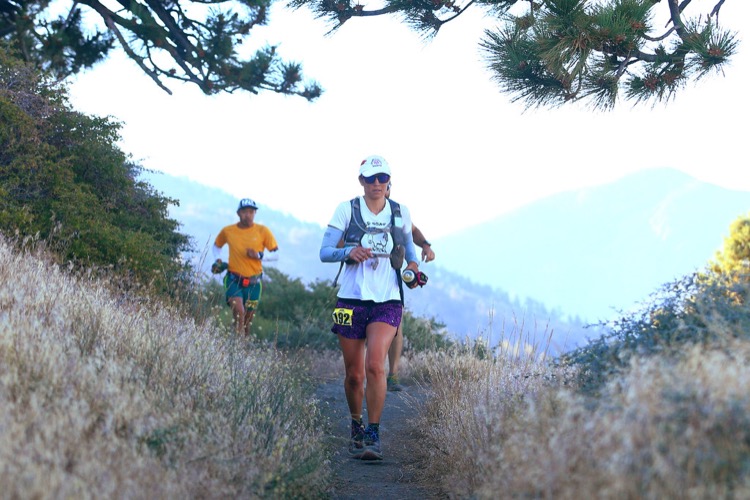 August 6, 2016: As runners finished the dry, dusty course of the Angeles Crest 100 in the heat of the day, a few select among them proved their mental and physical toughness by not only finishing the brutal 100-mile race, but also completing the third and final leg of the 2016 California Triple Crown of ultrarunning. Nine runners to be exact, out of 20 who attempted the challenge that year. Among this group of finishers was San Diego’s Michele Pauley-Clode, 34 years of age, and the first woman to ever to finish the California Triple Crown.

In its second year running, the California Triple Crown of ultrarunning is a tough challenge that consists of three 100-mile races within nine weeks of each other. San Diego 100 was the first race in June. About a month after that was the Santa Barbara 100 on July 8. Less than a month after that was Angeles Crest 100. Because of its slim cut-off times and a touch of altitude, Michele feels if you can finish the AC 100, you can finish any race around.

Michele Pauley-Clode is one of the most unassuming people I know. She truly believes that anyone can do what she does. She brings her infectious smile in to work six days a week as she runs the Baskin Robbins that her family owns in La Mesa, California.

She is also a badass in her own right. Along with the CTC she has six belt buckles, 31 total ultra finishes, the San Diego Ultra Slam, 11 half Ironmans, and 6 full Ironmans. One of her favorite athletes is her husband Peter Clode (ex-professional triathlete) who has helped coach and navigate her through some of the challenges she’s faced along her nine-week journey.

In July 2014, she had a partial meniscus tear that required surgery on her right knee. Then in November 2015, her left knee required the same surgery. She started physical therapy five days after surgery and her first run (which only lasted for 3 minutes) was three weeks after. In January, she didn’t think she’d be able to make a go of SD100 in June since she could only run for 20 minutes at a time. Determined to be her best anyway, she focused on strengthening her body with cross training and cycling.

The Oriflamme 50K in April 2016 was the first big step into the unknown, testing the fate of her 2016 season. It was a nerve-racking 6 hours and 2 minutes on a course that consisted of a long technical downhill that jarred her knees with every step. To finish gave her a huge feeling of relief both mentally and physically. She knew she was well on her way to the SD100.

The 2016 San Diego 100 was one of the most brutal in the race’s history. Daytime temps topped out at 108 degrees on some parts of the course. Michele prepped for it and persevered even though about half of the race participants dropped due to the extreme heat. She looks back and wonders how she was able to finish. Call it destiny or just plain tenacity, she put her head down and gutted it out the only way she knows how.

After her experience with the SD100, she knew her chances of reeling in the Santa Barbara 100 were very good. And she was right. The second leg of her journey was complete.

Michele knew going into Angeles Crest 100 that this race would be crux of the entire CTC challenge for her. This was her third attempt. She had dropped from the race twice before due to her knee injuries. This year proved to be tough as the time cutoffs chased her throughout the night and into the next morning. But the stars aligned and Michele pushed through, picking up that final belt buckle.

Adding to her tenacity and toughness is the fact that she did two of the three 100-mile races solo. When it was all over and she was handed the CTC trophy at the AC100 finish – she couldn’t help but feel elated and proud. She became the first woman to receive that award.

That October Michele finished the Cuyamaca 100K to complete the San Diego Ultra Slam, rounding out one hell of a year.

The CTC has come under some controversy from some of the people who run the races involved. They claim that the challenge is too dangerous and not in the best interest of the runners’ health. This year, the Santa Barbara 100 is cancelled, so Michele’s title will not be tested in 2017 and she remains the only woman to have finished the CTC.

Michele’s 2017 season consists of a few more hundreds, including Wasatch Front 100, a few other ultras, with some triathlons sprinkled in. Her dream is to one day run the Hardrock 100.