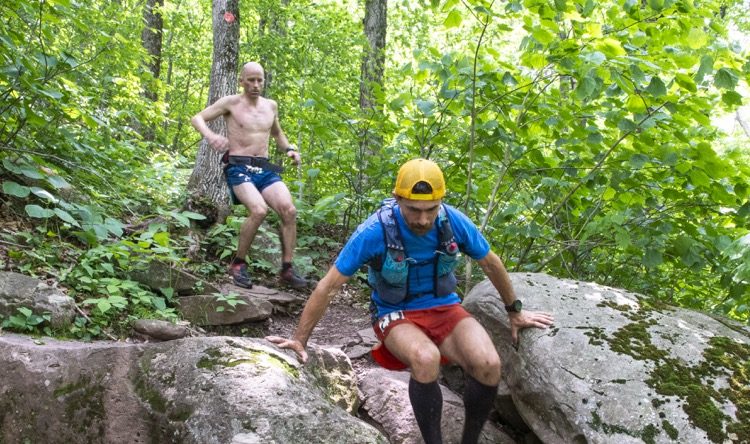 The evil Manitou gods seemed to relent a bit this year. At least the weather was excellent, even if the course remained uncompromising. Several days of rain before the race left some sections muddy. Nevertheless, a record number of runners finished before nightfall, which is the ultimate goal for many.

Manitou’s Revenge is run through some sections of the Catskills designated as wilderness areas. This means that there are some unique restrictions for our race, and for similar races in the Catskills. In fact, no more than 15 runners are allowed per mile, according to our state permit. To make this a reality, runners are sent off in waves of 15, five minutes apart. The start further includes three miles of bucolic country road before runners hit the first climb up to the famed Escarpment Trail. They then follow the very difficult and technical Escarpment trail to North-South Lake and then head down to Palenville, a low point at 600 ft above sea level. One of the longest climbs of the day follows, as runners ascend over the shoulder of Kaaterskill High Peak, capturing a number of great views along the way. By the time they reach the Platte Clove aid station and their drop bags, they have already run a 50k. But the fun is just beginning. 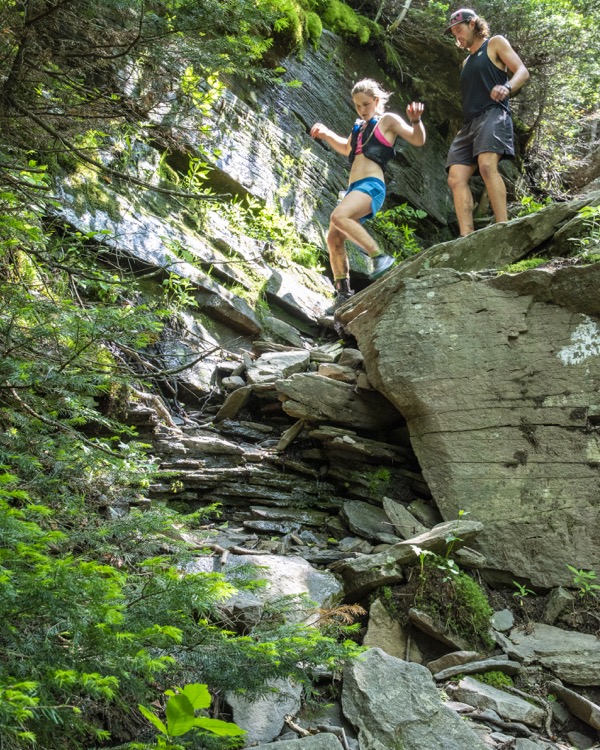 What follows is an unholy mess – the Devil’s Path! The Devil’s Path section features steep and technical climbs and descents over four of its peaks, some of them more than a bit sketchy. By the time the runners climb the last of them at Plateau Mountain at about 40 miles, they are ready for a respite. The relief of the following downhill lasts at least five minutes. Instead, they must tackle three more climbs and rocky descents on uneven and loose rock with poor footing before they can finally run down the last mile of road to the finish. Runners this year were rewarded with a cool technical shirt and a cloth map developed in cooperation with the New York New Jersey Trail Conference, which creates accurate maps for the areas and maintains the trails on our course.

A number of others showed significant improvement over their previous performances at Manitou’s Revenge. Kelly MacDonald improved from second place in 2018 to take the win this year in 13:40, improving her time by a half hour. Semantha LeBlanc was close behind in her debut, finishing strong in 13:52. In only her second ultramarathon ever, Pandora Down placed third in 14:13. Ben Nephew, also second in 2018, returned to reclaim first in 11:25 (he also won in 2017), defeating Andy Pearson. Andy finished in 11:48. Jeffrey Adams was third in 12:12. 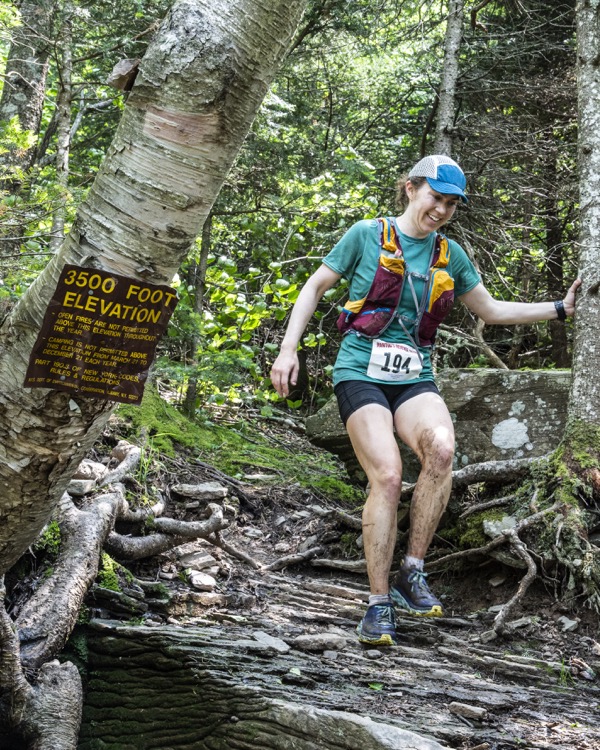 A number of runners have run Manitou’s Revenge multiple times. As a race director, I greatly appreciate the loyalty and perseverance of these veterans. In fact, four guys have run every edition of our race: Tom Dehaan, John Geesler, David Hollenbaugh and Gerrit Van Loon. They certainly deserve special mention. About half the finishers had run Manitou before, which meant that we had a significant number of first timers as well. However, it seems that once a runner gets bit by the Manitou bug, they keep coming back for more.

As always, the volunteers, sweeps, and support staff continue to earn high praise. Volunteering at Manitou can involve lengthy hours preparing or marking the trail, or staying overnight at an aid station or waiting for hours at the finish line. The work is much closer to the demands placed on a volunteer at a hundred miler than the ordinary 50-miler that ends on the same day. The next Manitou’s Revenge will be on 6/27-28/2020.