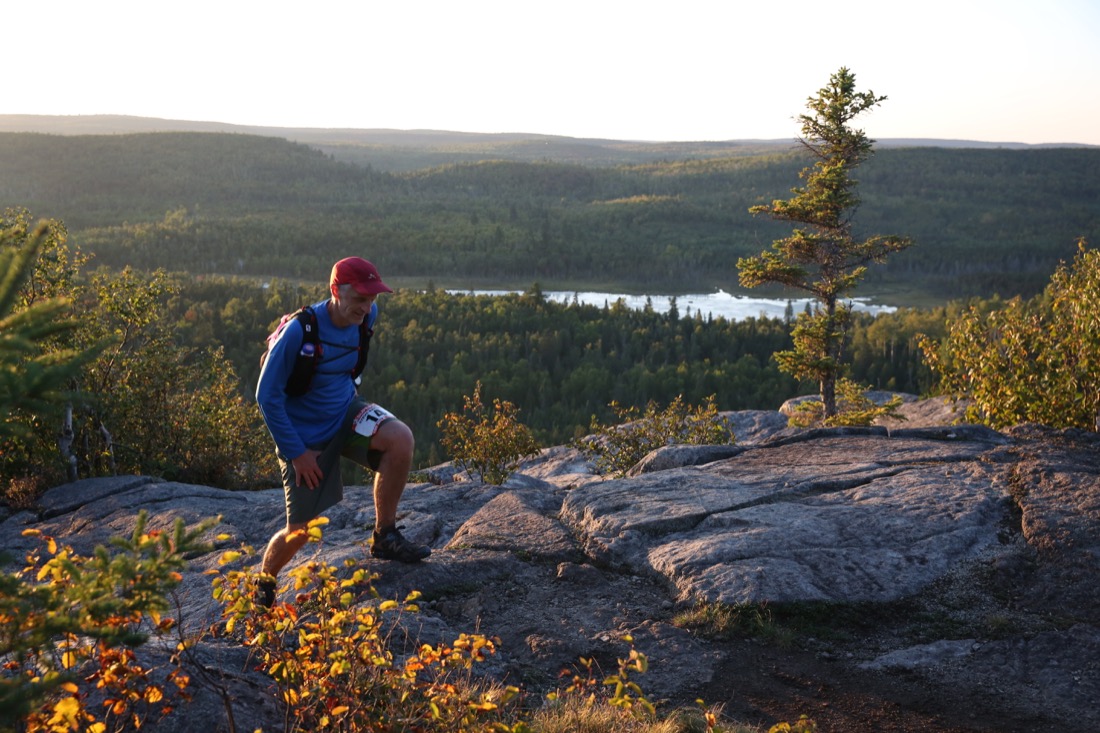 The world has felt unmoored lately… loosed from its tethers, drifting, unrecognizable at times. We seek to understand events we cannot fathom, to find the meaning behind natural and man-made chaos, to go through the closed plate-glass windows of friends who are suffering too much to reach out for help. Teasing out our place in the shifting patterns of things, we return, so inevitably, to the certainty of the woods and long trails. 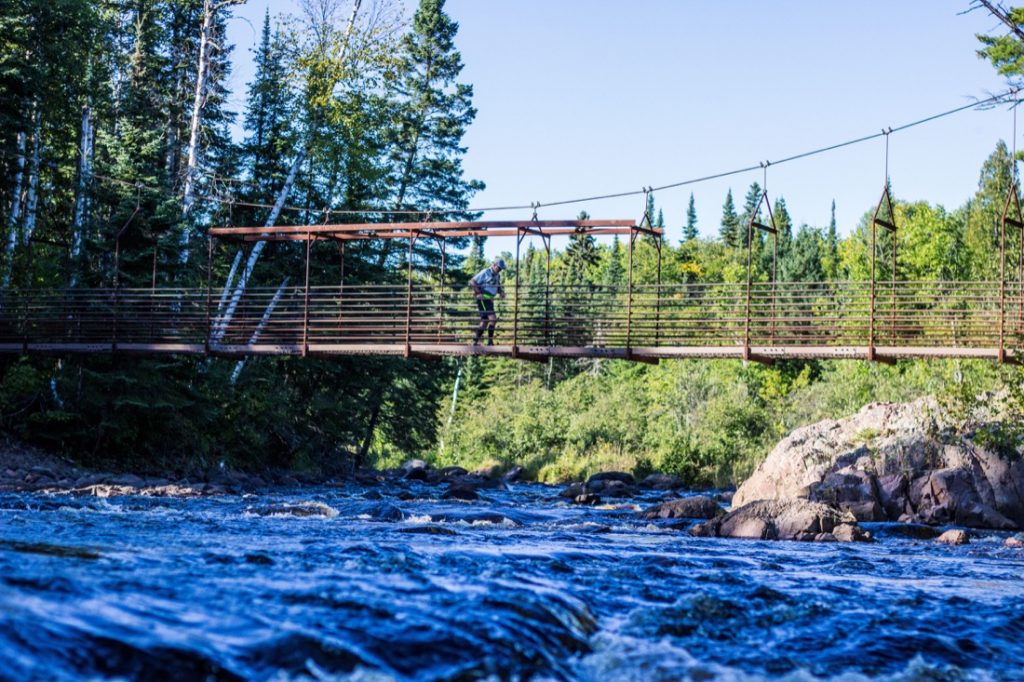 I returned there on Friday, September 8 to play what small part I could in the days-long trail festival that is the Superior 100, 50-miler and marathon races, put on by Rocksteady Running. This beautiful running event is one of the defining events of the Midwest trail running year, the way medieval societies marked the harvest and lit bonfires as the summer season waned.

From all over the heartland and beyond they came, bringing hiking poles, families, loaded tents and bandanna’d dogs. They came to embrace the pain, to confront their demons or to revel in pure, stripped-bare happiness.

I was there first at Tettagouche Aid Station to fill bottles and serve steaming broth as the afternoon shadows lengthened, when the runners hit mile 34 and the enormity of the task at hand stood immutable before them. It is a frenzy of helping, taking, replacing, producing, sometimes with barely enough time to offer the complex poetic encouragement that I feel each runner deserves. Watching them pass in and out, I was struck by the ardent devotion of the families–so attentive, so focused, so present for their runners. Newborn babies tucked into wagons, dogs on serene sentry at the trailhead, fiercely proud parents and sprinting children all waited, wrapped in anticipation, for a glimpse of their beloved Odysseus.

My own fearless solider was due at County Rd 6 just before sunset, the earliest time we were allowed to jump into the fray as pacers. Timothy Owata is tall and rail-thin, straight as a birch tree with the red beard and fierce will of a Viking warrior. He was fighting battles on the trail, and (not fully known to me at the time) deep hard challenges of life. They were bending but not breaking him; the Superior gods were testing him as he rose, over and over, to beat down their swords.

I wanted to do everything, be everything, take away all pain from Tim and everyone else. This was impossible of course, but my attempt would be honored, and it would not be solitary.

I left my first pacing stint to rest and recharge before the final stretch, from Oberg to the finish. Tim was now in the strong fierce hands of Jayna Tomalty, his next pacer. She is beautiful and fast, small and mighty, a frequent top female at numerous races. We had traded French phrases and exchanged armor for the next stage of the battle. 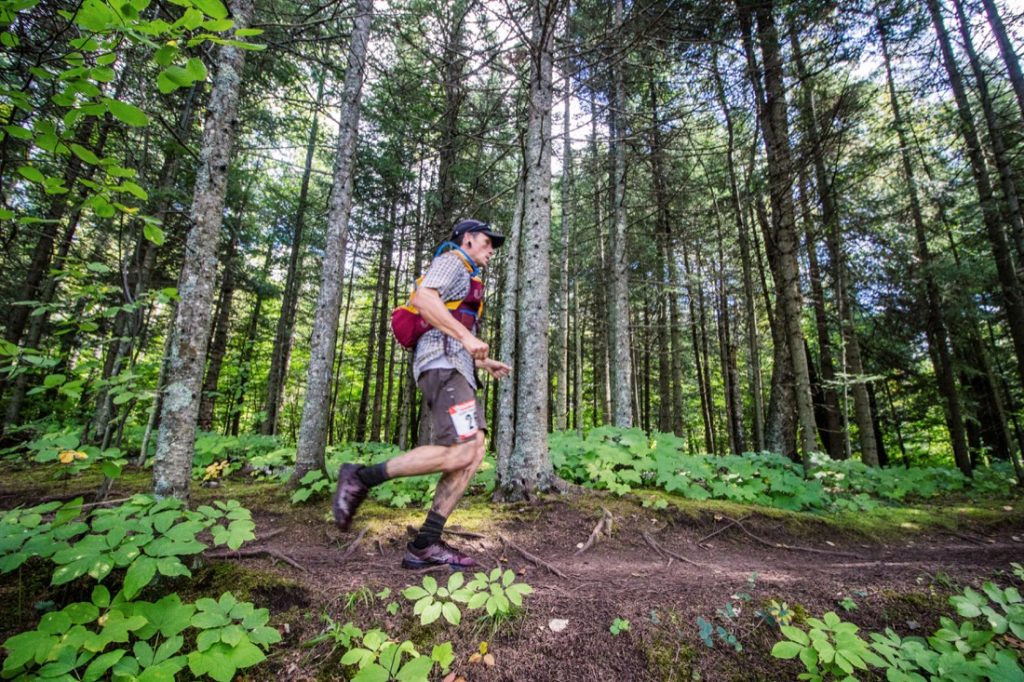 The leaders were gliding in the pearl-edged darkness, their Herculean strength smoothed to effortlessness as they crossed the line. Nothing is more impressive than seeing these relentless, exuberant beasts take the trail into their hands and bend it to their will. To place high in a Superior race is to wear a wreath of vivid laurel leaves that will never fade.

The races hummed on, the 50-milers emerging into full daylight and the marathoners embarking fresh-faced on their journey. It was finally time to head to the last aid station, Oberg. I looked up and Tim and Jayna appeared, ready to start the long march up Moose Mountain. Tim’s spirit was numb and his ankles aching, but we did not speak of stopping.

We talked through each step, as if describing a painting to someone far away who couldn’t see it. “There’s a big rock there, so you’ll want to go around to the side. Good, now pull yourself over with that branch. Excellent. You’re descending really well. You’re a 100-miler. Who does this? The badasses, that’s who. OK, watch the mud, shift your weight back, excellent.” And on and on, until, as they say in the Old Testament, it was morning and it was evening of the second day.

I thought so much about this race, and ultrarunning in general, during this section. Sometimes, in the farthest corners of our darkness, we don’t need complicated exhortations to reframe our entire life, or change our essential selves. Sometimes we just need someone to tell us where to step.

We came down the long road, lit up like an airport runway, and rounded the bend to the pool, where the finish line glowed. And then, in two strides, Tim was across. Jayna and I hung back, waiting. He still looked dazed. A medal hung from his neck, his long fingers curled around the beautiful silver buckle. “You did it,” we said quietly. “It’s done.” And I reached out for a hug.

Finally, the cold carapace of indifference and despair fell away, and Tim began to cry from joy, from exhaustion, from anguish, from triumph, from release. There would be weeks of healing ahead. But Superior had done its thing.

It had, once again, taken all of us out of our heads, out of our pain, out of diurnal stagnation, and shown us, with brutal and stunning audacity, how to be well and truly alive.

Hi Jeff,
I’m so glad my piece inspired you. It is absolutely my favorite trail, and it was so meaningful for me to help my close friend achieve his dream of finishing. Pacing is the best! See you on the trails if you’re ever in MN. 🙂
Take care,

Yes, you captured the journey of 100 miles so well. I cried while reading this, such a wonderful writing style you have. I have run the Superior 100 — one of my first 100’s, and the one that, when people ask me, I tell them is my favorite.

Hi Jane,
It is definitely my favorite trail race too. Congratulations on finishing the 100 up there…no small feat! Have a wonderful holiday season, and thanks so much for reading my article.

Amy- I really enjoyed your writing on this. I wrote two of your lines in my journal this morning to refer to later and add to all the great pieces of motivational writing that I collect for my Health and Wellness Coaching practice. I will credit you when/if used.

-“Sometimes, in the farthest corners of our darkness, we don’t need complicated exhortations to reframe our entire life, or change our essential selves. Sometimes we just need someone to tell us where to step.”

-“taken all of us out of our heads, out of our pain, out of diurnal stagnation, and shown us, with brutal and stunning audacity, how to be well and truly alive.”
Both of these resonate with me so much in my own life and journey right now, so thank you!

Hi Nathan,
Your words mean so much to me. I’m so glad that my writing reached you, and that it may in some small way help you reach others at their physical/spiritual testing points. Superior touches the lives of everyone who runs it. If you ever come to MN, I highly encourage a trip north! Thanks again for the lovely compliments.
Run with exuberance,

This is amazing, Amy! I have such a crush on your writing style 🙂

Awww, Perseus, thank you so much! That means a lot, coming from a best-selling author. 🙂 Happy to collaborate on a book sometime. (This is a legit offer!)