On the same day that the big dogs were stretching their legs at Western States, a few smaller dogs were involved in our own drama across the country at the Forbidden Forest 30-Hour Ultra Run in Stratford, Connecticut.

Compared to the majestic Sierra Nevadas, our stage was modest, a 401-acre park, called the Roosevelt Forest. Modest as it may have been, the forest was both enchanting and charming. As literature on the park correctly notes, “Trees, ferns and wildflowers abound.”

Perhaps the stage wasn’t as big as out west, but every runner at Forbidden Forest was still fully engaged in high drama. The format at Forbidden Forest is not the usual 100-mile race with a 30-hour cutoff. It’s a no-one-DNFs 30-hour run with the win going to whomever runs the farthest, and special buckles for everyone that manages 45 laps of the 2.23 mile loop, or 100.35 miles. Consequently, the race was a mix of runners with widely varying goals and dreams. 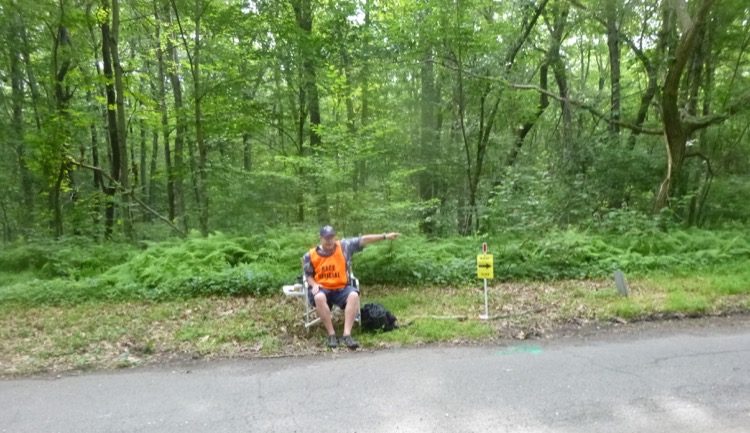 For Jeffrey Vieyra and Eugene Bruckert, a couple of senior runners with over 600 completed ultras between them, the goal was to add another 50-mile effort to their prodigious records. For Billy Richards, who is on a quest to set the American record for the most official 100-mile runs in a single year, it was another step toward what he hopes will be 43 hundreds in 2019. For me, it was another buckle from another state as I try to run a 100-mile race in every state in the country. Canadian Carsten Quell and Jason Koomen from Ohio, were hunting buckles for the sheer love of the hunt, and the amazing satisfaction derived from each finish. Many were running their first ultra, finding out what it means to run 50k, 50 miles or 100k. Others were back to try again for big miles after wilting in the unusually high heat and humidity that marked the first running of the race in 2018.

This year, the heat again climbed into the low 90s which slowed everyone’s jets. However, it helped that most of the trail was sheltered from direct sun by the forest canopy. Returning to the start/finish Forest Pavilion every couple of miles also allowed runners to adjust clothes, slather on sunblock, and dip into the stores of ice that race director, Lou Loban, kept in good supply. Food was also a big plus at this race with pizza for lunch, pasta and meatballs for supper, and breakfast sandwiches to-go in the early morning hours. 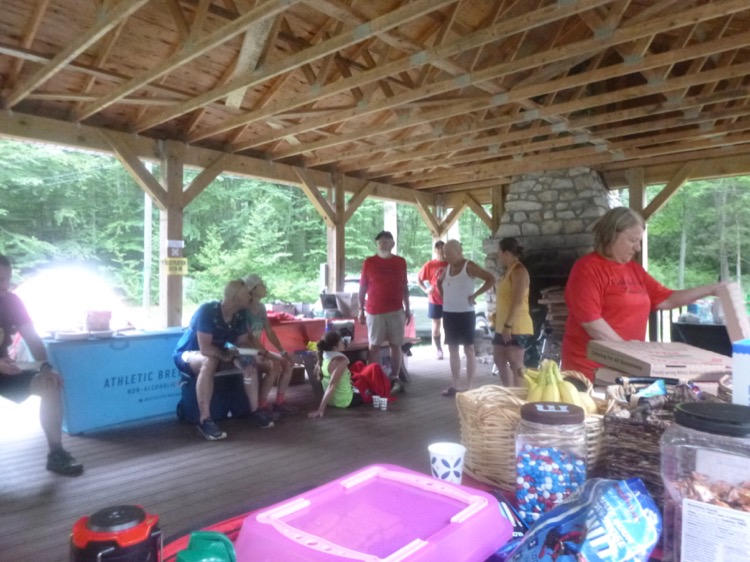 Runners get aid at the pavilion, the main aid station of the race. Photo: Gary Dudney

A drenching downpour spiced things up late afternoon with some lightning strikes that seemed aimed at our little park, but again, you were back at the pavilion in no time to change clothes as the temperature dropped like a rock, at least for a while. As night rolled around, the rhythm of the course had become second nature: jeep road out to the plank (a long plank structure over a bog), single track over two mild climbs, and then down to a little stretch of asphalt. Then, single track over to a little bridge, through a muddy section, up the steepest little climb, another muddy section and then over to a rolling jeep road covered in straw and back home.

The night was very peaceful. Runners with shorter goals tended to cut out for a while and make good use of the tent area that was right next to the pavilion. In the end, everyone’s last lap was a triumph and a joy. All finishers, that being everybody, were welcomed home like long lost family members. Matthew Pedersen won with a total of 114 miles, and 12 of us earned classy Forbidden Forest belt buckles by covering 100 miles, including Billy Richards. Jeffrey and Eugene both got past their 50-mile goals.

Race t-shirts had different text printed on the back. My favorite was the definition of METANOIA, “the journey of changing one’s mind, heart, self, way of life.” Wait, isn’t that the definition of ultrarunning?

Gary, you were great ! Thank you and I enjoyed both of your books; a mandatory read for new and experienced ultra runners, who want to enjoy the journey. Amen.