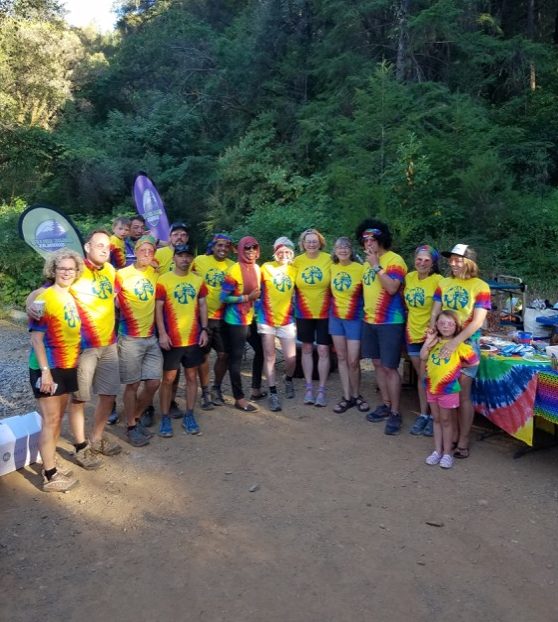 Destination Unknown: The Spirit of Western States, The Soul of Ultra

“What do you want me to do, to do for you to see you through? For this is all a dream we dreamed one afternoon long ago…” – ‘Box Of Rain,’ The Grateful Dead

The relocated Brown’s Bar aid station, now known as Quarry Road, offers its volunteers a defining glimpse into the physical state of incoming runners after 90.7 miles of foot travel from Squaw Valley. The steep, and sometimes technical, singletrack descent from the cruiser country leading into and departing from Auburn Lake Trails aid dumps you sharply onto the dirt road paralleling the Middle Fork of the American River and immediately into the welcoming arms of assistance. For every runner that blasts in, sure-footed and quad-rock steady, there are dozens that descend like inebriated penguins, wobbling wildly side to side on trashed legs and rupturing souls, looking at any second capable of collapsing irretrievably into a heap of dilapidated dreams.

It was after 8 a.m. on Sunday morning, 8:12 to be exact, 27 hours and 12 minutes since a traditional shotgun blast sent 369 runners on their way to Auburn when I latched onto someone that seemed vaguely familiar and implored that he needed to grab and go. Time was not on his side. “Do you think I have a chance?” he asked. “Yes,” I responded simply, as he grabbed his refilled hydration pack. Walking with him out of the aid station I launched into what had the previous evening quickly become my course description spiel: “It’s 1.4 miles of rolling along this road; then a left turn onto the 2+ miles trail climb past the old aid at Hwy 49 to Pointed Rocks; followed by a quick descent to No Hands, the final climb to Robie and the road through town to the track.” Silence. “Do you really think I have a chance?” 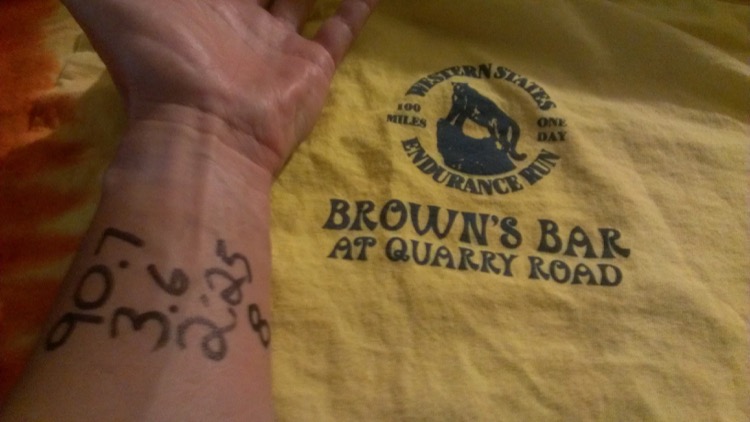 “Dude, you can’t remember four numbers?” – Rob Cain to me after I asked for a sharpie to write down aid station mileage, distance to next aid, 24-hour pace & 30-hour pace. “When I get sleep-deprived, all bets are off.” was my response. Besides, misinformation is worse than no information. Photo: Jeff Kozak

The signs both entering and leaving the aid station said 8 a.m. was 30 hour pace; the race program said 8:10. If anything, this discrepancy simply reinforced the fact that, although based on historical precedent, there was really no way to fully account for individual variability in lit-fire-under-one’s-ass motivation. Or the fact that an ever-increasing lottery bottleneck of rush hour proportions meant everyone now fully recognized this may be their once-in-a-lifetime shot at a States buckle.

“Do you have any run left in your legs?” I asked. “Well, yeah, maybe a little,” he hesitatingly responded. “Doesn’t matter if it’s a 15 min/mile shuffle,” I proclaimed, “you’ve got to run every inch of flat and downhill you can. It will make up for the slower uphill walking…but you’ve got to attack that like you mean it, too.”

It was time for me to turn around. “Seriously. Do you think I have a chance?” His eyes were imploring; he was obviously struggling with doubt, and the weight of an entire day of being prodded by cutoffs. “Look. You can do this. But you’re going to have to focus intensely for these last 9.5 miles. There’s no time to spare.” I bid him good luck and watched his shuffling silhouette disappear around the corner into the fractured sunlight of a rapidly rewarming canyon. 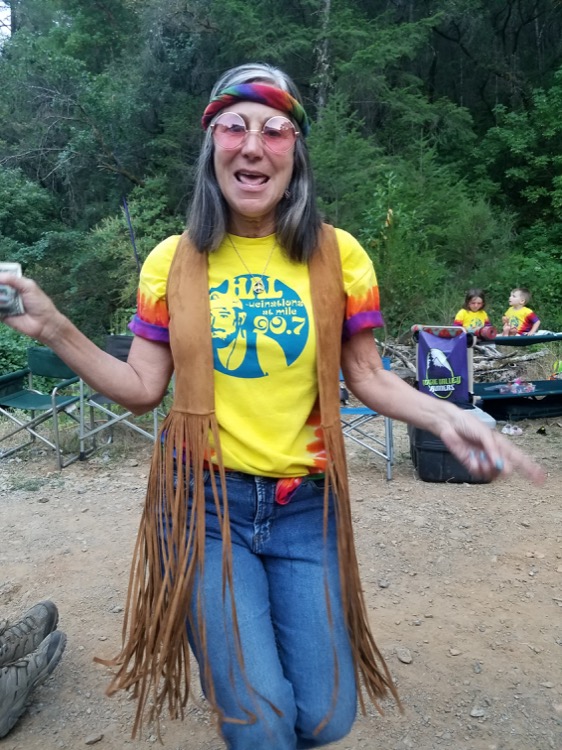 Quote of the day (and night): “Yeah, ahh, I’m still a few years away from feeling comfortable wearing a shirt with my own face on it.” –Hal Koerner. The ’07 & ’09 WS100 champ stuck to Rogue Valley Runners apparel for the duration. Photo: Robert Hodge

Standing in the back of the awards ceremony tent, desperately defending my sliver of shade amongst the swelling crowd, the inevitable comedown in energy sideswiped my enthusiasm as I grasped at a tent pole to stabilize my wooziness. The symbiotic swap of inspiration that is volunteering at an aid station had made it by far the easiest all-nighter I had ever pulled, but the rising heat was mixing with my sleeplessness to create a coma-like cocktail of punch-drunkenness.

Turning to leave, my eyes caught a newly familiar face that stopped me in my tracks. From the time Jim Walmsley freightrained through at 6 p.m. on his way into the history books and course record redemption, until the official cutoff at 8:40 a.m. we had helped so many runners, across an unbelievable spectrum of physical and emotional states, that much of the individualized humanity was blurred; but a few interactions stood out. The woman from Norway, now sitting to my left, was one.

Entering the aid station she appeared not to know where she was, what she was doing; definitely not what to do. The chair she found looked permanent. I sat down next to her and looked over at a stare immeasurable in yards. Her stomach had refused to accept almost everything since Last Chance, some 40 miles earlier. How she remained capable of moving forward on so few calories for so long was testament to the intangibles of hundred milers crossroading with the human spirit.

The rice ball she attempted to get down came back out quickly. Nearly intact, I joked that we’d just put it back on the table, and grabbed the closest thing to a glucose IV drip: Coke. Long on time but way short on calories, I continued to check on her over the next half hour. The stare grew impossibly more vacant but eventually the cup was empty. As she slowly got up to leave with her pacer, I wondered how much farther she could go before something akin to caloric vapor lock occurred. To the Placer High track, apparently. She had finished. My eyes were misty again. 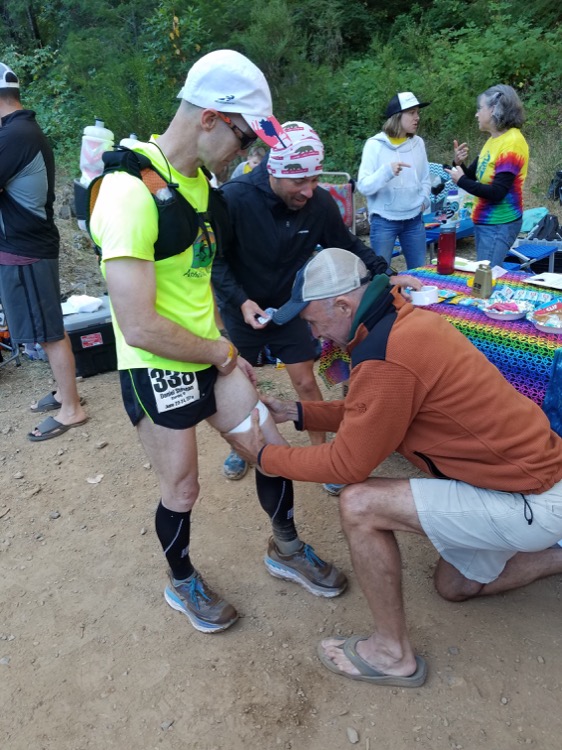 “I’m fairly proud of that. Most people think I worked for the Forest Service.” – John Price referring to a dentist career overshadowed by trail work and ultrarunning…and, hopefully for this guy, athletic taping techniques. At least there was a quality tape roll holder on hand for the background non-assist. Photo: Robert Hodge

Ninety minutes earlier I had jetted from Quarry Road aid breakdown to the track to catch the final third of the Golden Hour, the last official clicks of the clock before the always heartbreaking sound of the 30 hour horn. There is always what appears an improbable number of finishers in the final hour. This year there was 65 out of 299. I saw 19 of them. Most had materialized out of the trees at Quarry Road as shell-shocked souls moving forward as earthbound vessels of nearly pure spirit with seemingly no physical means to be continuing to do so. The remaining 10% of a hundred miler can feel like a compressed version of the first 90% when willpower is the sole-remaining driving force.

With five minutes left on the clock, the runner desperate to dilute his self-doubt with external affirmation of his chances came around the final turn where I stood in Lane 5. High-fiving I turned to watch one of the greatest views in sports: a Western States runner moving down the final 100 meters of track and disappearing into a sea of cheering spectators at the finish line.

That second-to-last finisher was UltraRunning magazine columnist and Nowhere Near First author Cory Reese. He had jello-legged into and out of Quarry Road with pace statistics now pulling ahead. But statistics are objective, and, no matter how accurately compiled, cannot account for the most wide-ranging variables of the ultrarunning equation: the traits that comprise mental toughness. Misty eyes are challenging to avoid during the Golden Hour.

With four buckles and now one volunteering experience under my belt, I can unequivocally state that, even if one had run all 45 editions of the race, your experience of the phenomenon that is Western States would be drastically diminished without some volunteer time. There are a myriad other ways to get involved, but working an aid station is an emotional high that rises above easy explanation. I’ve witnessed many bronze buckle finishes over the years, but watching everyday athletes, or more gifted ones gutting out a sub-expectations day, that you were in the aid station trenches with earlier is a special moment this sport offers to anyone willing to make the effort.

Seeing Cory and some of the other Golden Hour finishers I had assisted in some small way successfully complete their journey to Auburn was a pinnacle moment for me after two decades of ultrarunning. And it drove home the reality that, behind the thin layer of front running glory that understandably captivates us all, there are and always will be, no matter how mainstream this sport goes, the nowhere-near-first multitudes comprising the heart of Ultra quietly grinding it out for the simple satisfaction of proving to themselves they could do it.

I last ran States in 2015. This December will be my fourth consecutive lottery, meaning I likely still have years to go before toeing the Squaw Valley line again. It no longer really matters though how long it takes, for now I look forward to pulling an aid station all-nighter again with every bit as much anticipation.

Excellent piece Jeff…you guys were a sight for sore eyes when I came through not long after sunrise. Thanks to you and the whole crew for being out there.

Thanks, Chris. It was great being witnessing the race from a different angle, and helping runners on their journey to Auburn. Recover well!

You brought tears to my eyes – I am a long-time captain of aid stations at two Wisconsin ultras and know the rewards of being on “the other side of the table”. I often tell our volunteers that we are in the “dream business” Every runner comes to the start with their (own) dream – they trust us to help them make their dreams come true and that is their gift to us.

This is great. Thanks for reading. And for volunteering.
Cheers! – Jeff

Thanks for reading, Sheryl. Cheers – Jeff