Over the last month or so I’ve been doing a lot of daydreaming and reminiscing to help me cope with the current pandemic we’re currently in. Childhood memories are bubbling to the surface of my conscious thoughts – back when I just wanted to be the boss of me and do whatever I wanted. My imagination was wild and full of never-ending ideas.

Let me take you back to when I was six years old and getting grounded on a chronic level. Through my eyes, the reasons were never my fault. The main catalyst for grounding was my tattle tale of an older sister. She would strategically hold tattle notes as ammo until I was at a friend’s birthday party or playing outside having too much fun. And then, boom! All of a sudden, I would find myself sent to my room. At first, I was devastated because it felt like the end of the world. I would cry until I ran out of breath and needed more air for another round. Eventually I grew tired of that tactic, as it did not get me out of my room any sooner. 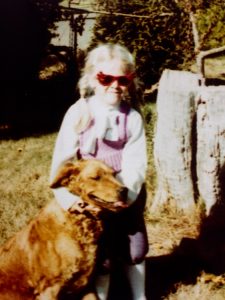 At times like this, when we have no idea when we’re going to be let out of our room, both literally and figuratively, is when we need to channel our inner child. Ignite our wild imaginations like we never have before. With an unknown of when we will roll out our normal carpets of life, we have a golden opportunity to imagine, ever so vividly, all the things we’re excited to do, create, achieve and learn. Eventually we’ll have this pandemic in the rearview mirror and we can imagine what it will be like when we’re unleashed to roam wild and free in our playgrounds. We can find things to get us through the moments that feel like torture. We can connect with ourselves in ways that we never have, or maybe haven’t for a very long time.

I recall one of the hardest parts of being sent to my room was not knowing when I would be released from “room jail.” No watch or clock were there to give me an inkling as to how long I had been in my room and it felt like torture (or so I thought). I’m pretty sure the first offense was when my sister and I were standing at the bus stop being teased by boys. They also gave us the middle finger, which I knew meant a swear word. Regardless, I had to stick up for my sister and I, and I proceeded to give them my own choice words and proudly flipped them off with my very own middle finger. Said actions resulted in getting tattled on later.

I finally succumbed to embracing my room, with no timeline of when I would be let out. I started to play with toys in my room, read books, stare out the window and daydream. I started to like it, but I did not divulge my newly found feelings to my parents. Eventually, they caught on and sent me to the guest room without the bedroom amenities previously mentioned. I rebelled again, feeling devasted and tortured. I eventually embraced that room too, sitting on the edge of my jail bed and staring out the window. Soon, I graduated from staring out the window to pretending I was a famous singer, belting out tunes as if I really knew all the lyrics to Juice Newton and Little River Band. Nobody cared but me.

Then I got “kid smart,” or so I thought. I decided to use the time sequestered to at least make some money. I proceeded to jiggle my baby teeth out one by one, starting with the top middle row and eventually working my way to the bottom. Yes, I ended up hustling the Tooth Fairy while being stuck in the family guest room. My parents eventually stopped sending me to a room when I was grounded and I’m pretty sure it was because I had a lot of missing teeth.

What the hell is my point of telling you all this? What does it even have to do with ultrarunning? When I was six, there were no smart phones or social media. There was conversation, connection and daydreaming, with far less distraction. In real time, I am relishing in my memories of when I felt like I do now, for much different reasons. It has truly helped me cope.

Heather comes from a background in outdoor writing. as well as working with brands & retailers in the run, bike, and outdoor industry. She grew up between Oregon and Cape Cod, MA and now lives in Hood River, OR. Her love for running started in 1st grade when her gym teacher put on a race around the high-school track. The butterflies and race bug grew on and evolved, to take her to running in the woods while racing for the University of Maine, Orono. Her dream of someday putting on some fun trail-races/ultras, now exists, in her backyard trails of Post Canyon. When not in front of her computer, or in the woods, you can find her making custom trucker hats for her friends, with her fabric markers.