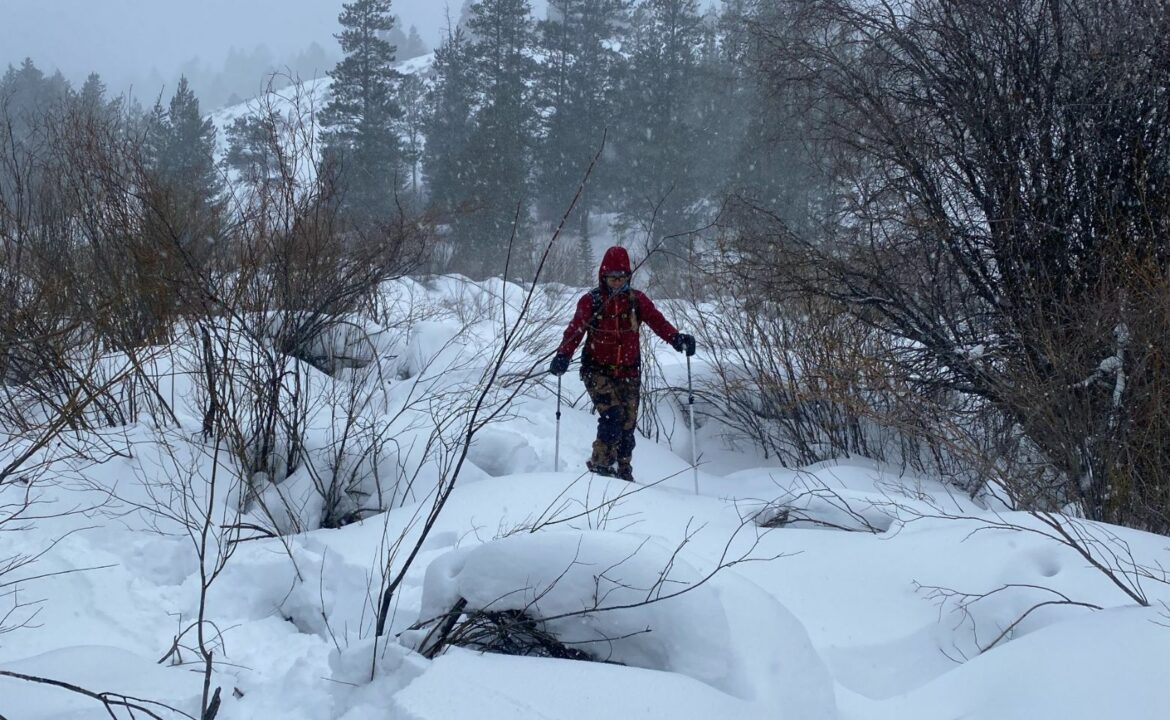 Recently, a friend and I went skiing in an area that was new to us. We didn’t have what we deemed significant objectives and I was anxious to test my lungs after an awful case of the flu. On the drive to the trailhead, steady winds were drifting snow across the road which meant this adventure would surely keep us on our toes.

We parked, geared up, put skins on skis and traipsed toward a skin track I had identified a couple days prior. The tracks followed a designated summer trail, one I had run just a couple of months before. Familiar terrain has a way of making us feel a little more at ease, even if you leave the parking lot wearing all of your extra layers. If you’re a little less familiar with backcountry or cross-country skiing, gearing up largely parallels the way a runner would layer clothing in the winter because it’s an active, aerobically demanding sport. Point being, the weather was menacing and I was glad to have a sense of familiarity.

My friend led the way, and as we reached the top of a sub-ridge he pointed left. Beyond the swampy, willowed area below was a mountain shrouded in blowing snow and fog. I checked the map and asserted we were looking at a relatively insignificant peak. Still, a summit is a summit and it’s more fun to top one than not, so we turned our tips in that direction. But first, there was the swamp to be crossed. There had been plenty of early season snow and most of the willows were covered and bowed beneath the snow’s weight. About every 10 glides, one of us would sink unexpectedly. We both laughed at the situation, and I caught myself thinking, “Wait, is my ski partner laughing about bushwacking through a lumpy swamp?” This was only the second time we had ventured out together. Few backcountry skiers and mountain enthusiasts will find humor in the art of weaving through underbrush and shrubbery. Maneuvering through, between, over and around wooded plants that may whip you across the face when you’re least expecting it generally doesn’t inspire enthusiasm in the same way that cruising through pillows of powder might. So, when you meet an adventure partner that deems bushwacking in the snow to be almost as much fun as knee-deep powder turns, you know you’ve struck gold. I smiled and reveled in the camaraderie as we steered through our playground. 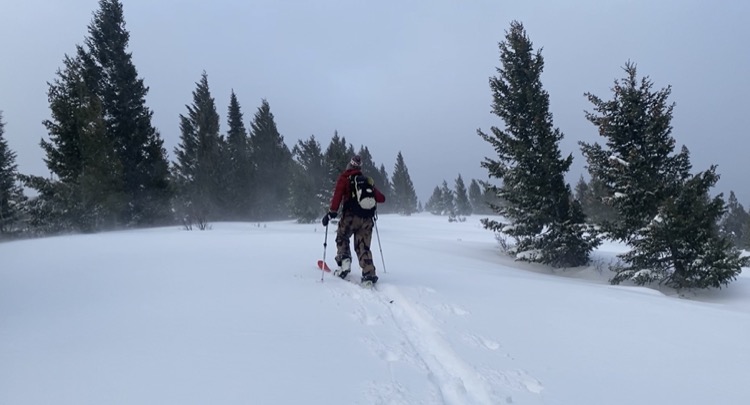 We neared the end of the lowlands and realized we had a small stream to cross. Because it was early December, the creek was not yet frozen nor was there enough snow for us to cross without sinking into the stream. Without hesitation, my friend began sliding snow into the creek using his skis. He has spent an immense amount of time in the outdoors throughout his 26 years, so I wasn’t surprised that he knew to create a snow bridge. Snow bridges will form naturally, and we can construct them given the right conditions. Generally, this means there is enough snow that can be moved onto a relatively slight amount of water. My partner moved just enough snow into the creek, then crossed to the other side without incident. Upon reaching the opposite bank he again went into action, moving snow with ease into the creek to bolster the bridge before I crossed over. I eased myself down toward the creek, gingerly took a few lateral steps, remained dry and above the running water and side-stepped up the other side of the stream. To be honest, none of these actions are especially noteworthy. When we venture into the mountains with companions it’s understood that we are to watch out for each other in the same way we take care of our own well-being and safety. The group is only as strong as the weakest member.

We moved on, navigating toward the summit, setting a zig-zagging track toward the top, trading turns breaking trail. I was pleased that my lungs were not imploding, though still not at 100%, and I wasn’t stopped by coughing fits nor searing sensations with every chilly breath. As we moved upward, I continued to think about the snow bridge my friend had built. I knew it was basic standard operating procedure for backcountry skiing, but the importance of the fact that he added to it after he had crossed without difficulty, to make sure that I would be able to do the same, resonated deeply with me. It occurred to me this experience was analogous for all sports and even in life. Snow bridges are not permanent, they are subtle and usually delicate, as are relationships with people and with sport. Even in this fragility they allow us to remain safe and move forward. Many times, in the sport of trail and ultrarunning, we have opportunities to help ourselves and others in small ways. Often, we assist without thinking about it because that’s what we’ve practiced since day one. I don’t think I need to list the infinite parallels—each of us can likely remember countless moments on the trail and in our daily lives where we’ve helped another to move forward on their journey.

I don’t know that I have any truly deep wisdom to share—I’m simply stating that we rely on others and people rely on us, and that’s a natural and beautiful thing. We each have the capacity to help in big and small ways, maybe more frequently than we realize, if we’re paying attention. It could be as simple as sharing some food, water or blister tape with a stranger that you come across in a race or a training run. Maybe it’s checking in with a friend you’ve not heard from in a while that might be geographically distant from you, or picking up a small piece of litter or two along the trail the next time you’re out. Don’t discount the small actions you take that create a type of snow bridge between yourself and those around you.

Darcie Murphy began coaching with CTS in the early 2000s at the same time she was racing bikes semi-professionally. She transitioned her focus to trail and ultrarunning after starting a family, and weaved ski instruction and a NASM strength certification into the mix. Her curiosity to expand the limits of the human mind and body combined with her enthusiasm for mentoring new-to-the-sport athletes drives her commitment to her craft as a coach and athlete. You can find her coaching information at trainright.com.