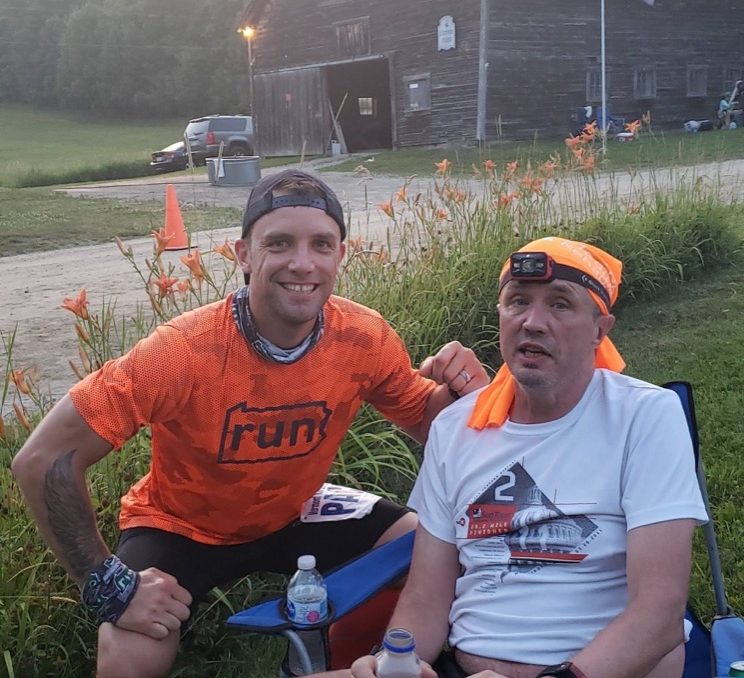 Growing up, Robert Gantz was not a runner.  He felt that running was the punishment for his favorite sports. However, about 10 years ago, everything changed. Robert had just arrived at the Little Rock Air Force Base for C-130 airplane training and his mentor and best friend, “Seabass,” asked him if he’d like to run a 10k the next day. “I literally laughed in his face. A 10k felt so far, it made me cringe.” Seabass assured him that he’d be fine. Always up for a challenge, Robert said “Let’s do it.” He ended up placing third in his age group, and the fire was lit.

Robert enlisted in the United States Air Force from October 2006 until December 2017. “During this time, I was a C-130 loadmaster and went on six different overseas deployments, amassing over 1,000 combat flight hours.” Robert was a decorated soldier in the Air Force winning many awards, including some at the national level. Following a near-fatal airplane incident in PA, he retired for medical reasons. After the accident, he was diagnosed with PTSD. “It was really tough for me because I wasn’t able to run for quite a while after the incident. Running was my outlet for a lot of things and I was pretty down for a long time. It wasn’t until I started running again that I was able to get out of that funk and see what I was capable of in all aspects of my life.” 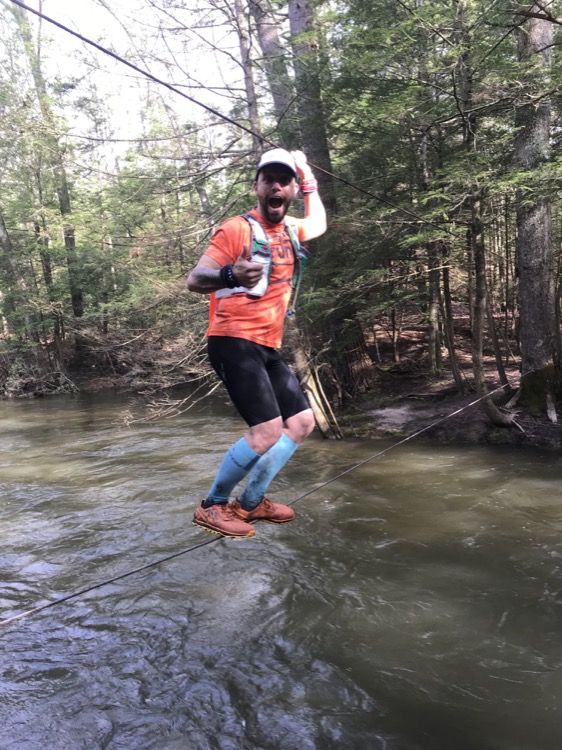 Robert having a ball on his local trails. Photo courtesy Robert Gantz.

Volunteering and pacing at the 2019 Vermont 100 is a weekend that stands out in his memory. Robert, his wife and two young kids all piled into the RV and made their way north to Vermont. Eager to help in any way possible, he set up an impromptu water stop due to the searing heat the runners were experiencing, “It was so cool to see hundreds of headlamps bobbing down the road and how thankful the runners were. It was even cooler to hear and see the horses coming.” fter his duties were finished, he was ready to pace for a runner. “I was lucky enough to get paired up with Jim and ended up pacing him for the entire Camp 10 Bear loop. He was such a knowledgeable guy about the race, and I could not have been matched up with a better runner for my first VT100 pacing experience.” As he meandered through the trails with Jim, Robert knew one thing for sure. Next year, he would be going for his own buckle in Vermont. His dreams were set in motion. Now, he just needed to qualify.

Robert decided the Tussey mOUnTaiNBACK 50-mile would be his qualifier for Vermont. “I thought I was well-prepared for this race, however, there were many challenges along the way.” A stomach bug wove its way throughout their household eight days before, leaving misery in its path. “I couldn’t keep anything down and I wasn’t sleeping.” Sometimes the best laid plans get interrupted. The first half of the race was a downpour, fully testing Robert’s mental game. His IT bands flared up by mile 23, making the descents excruciating. “I did a great job of getting some time on my side during the first half of the race. I was so determined to qualify for the Vermont 100 that I told myself I would crawl across that finish line if I had to, but I was going to finish in under 12 hours.” By mile 30, the negative thoughts flooded in, telling him to quit, but his dream of qualifying kept him pressing on.

As he rounded the corner of the last aid station, he got a huge surprise: his wife Meghan and their two kids. Their cheers and excitement sent his spirits soaring. “This gave me the shot in the arm I needed to finish the thing.” Robert refueled, kissed his family and pushed on for the final 12 miles. “As I was approaching the finish line, I saw my family again. Tears began to well up because I knew what I was accomplishing wasn’t only because of my hard work, but also because of their sacrifices as well. They were there to celebrate it with me. I had my kids place the medal around my neck at the finish line and it was incredible.” 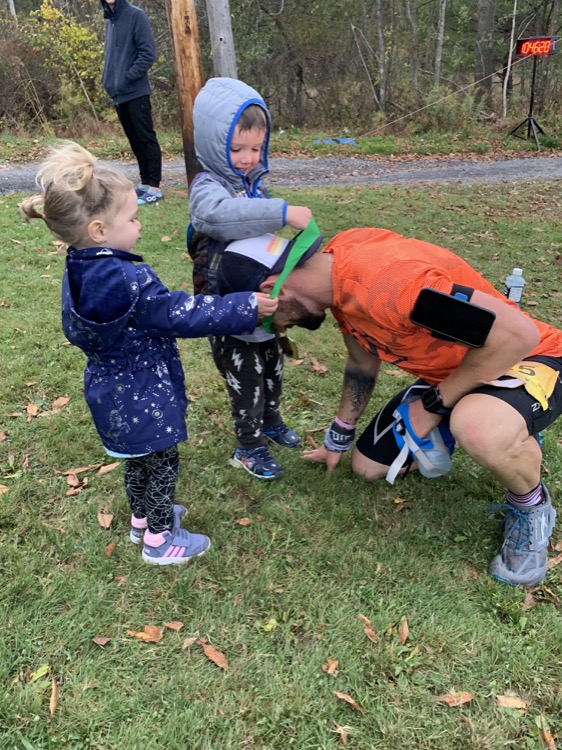 Robert with his kids at the finish of his 50 qualifier. Photo courtesy Robert Gantz. 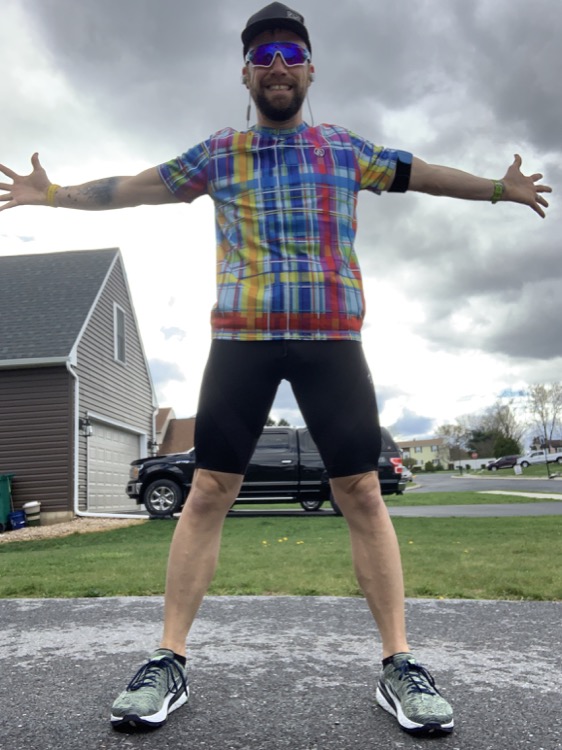 With the cancellation of so many races in 2020, Robert’s goal of finishing the VT100 has been put on hold, but his motivation to continue to run and train has remained rock solid. He recently completed the 4x4x100 mile challenge, running 4 miles, every 4 hours for 100 hours. “After about the third lap, which was a midnight run, the interest in the challenge was growing with my online running group, Outrun the Dark. They are a group that raises awareness for people struggling with mental health issues. By the time I hit lap 10, I had at least one person running virtually with me from somewhere around the world. I also had a friend who joined me for every noon lap, even in the pouring rain. The online group was so inspired by the whole challenge that there were people posting pictures of themselves doing something they never thought they could do.”

When asked what running means to him, he pauses, “Running has taught me that pain is temporary. It is a lot like life for me. There will be some highs, there will be some lows, and there will be some pretty stable flat days. Life is very much the same for me. I’ve learned it’s okay and don’t get too high with highs or too low with the lows.”

Robert hopes that his story will inspire those around him that feel alone. He knows first-hand how much running has helped him outrun his darkness and mental health issues. “I want to be able to use my running to stay positive and keep others positively afloat.”