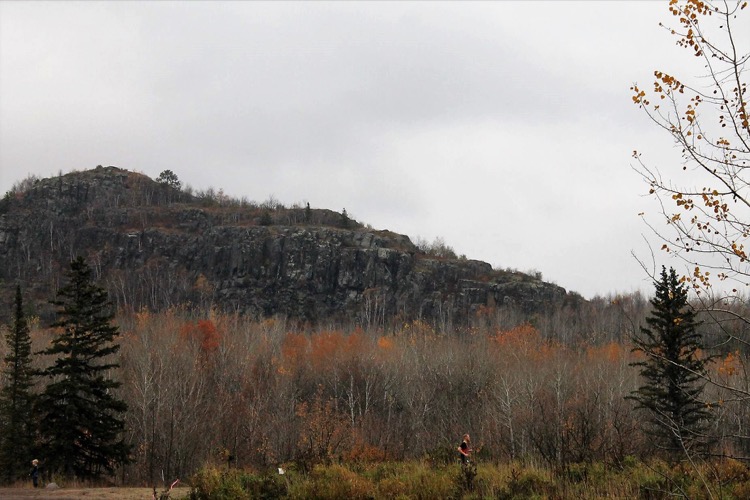 A Wild Deluge at Duluth

The sky was dark and the ground was dry when we arrived at the shore of Lake Superior for the ninth annual Wild Duluth 100K on October 21, 2017. There were 74 of us with our crews, gathered at Bayfront Park, only half of whom would finish. There were thunderstorms forecast but it was still calm and clear at 6 a.m. when the race started. We left the lake behind and came to Enger Park, a 530-foot bluff that looks out over the city. The trail was a sheer mile up, and almost immediately back down, which was what the whole day would be like as we followed the Superior Hiking Trail south. Along the way, we would slowly accumulate 10,000 feet of elevation gain (and loss). The air was cool, and in the dark, the trail flags easily reflected the path. After about an hour, the sun rose red over the lake.

Before long we came to the less trafficked part of the trail. At one point, I let Timothy Owata pass and watched him move out of sight. Then a few miles later he passed me again, having gotten what he called a “bonus mile” after taking a wrong turn. The leaves also made it hard to see the rocks on the trail. For a while I ran with Matt Aro, who lives in the area and knows the trails well. At one point we were scaling up and down boulders that seemed to never end, but he reassured me there would be runnable trails soon. Around mile 17 we met the first 50k runners going the opposite way. The leader [Michael Borst] was moving light and fast, with apparently little effort, like some sort of wood elf. At mid-morning the rain started, the first real rain on race day in the 9-year history of this event. It was light at first, but steady and soon it came down harder. By the time we hit mile 20, the hard packed trail had turned slick and greasy. In some places it drained and I could run well. But in others, if there was any incline at all my feet slipped from under me, and I had to run alongside the trail to stay upright.

After the aid station at mile 26, we came to the infamous “power lines,” a steep, 45 degree set of hills underneath some utility poles. The trail here had become a long mudslide, the first of which I slid down a la Romancing the Stone. Climbing back up, I had to walk though the raspberry bushes on the side. By the time I got through them, my legs and arms were torn and bloody.

The next section was on mountain bike trails, which were still solid around noon. Just then a thunderstorm rolled in and the rained poured so hard I could barely see the trail through my glasses. After the turnaround at mile 31, these trails started to get slick as well. The power lines were worse on the way back, and they seemed to cause a lot of people to drop out. The trails were also worse on the way back, and I continued to slip and fall. The last 20 miles were a constant battle to remain vertical. My shoe treads held so much dirt that they weighed at least twice what they had before the race, but there was no point in changing them. Instead, I resigned myself to plowing straight through. (Plus, I knew runner Anna Sortland was not far behind me, and had been since the turnaround. She finished just nine minutes behind me.)

The final miles were on a high, dry ridge. By then it was dark again, and I could see the city lights below. The last aid station at mile 58.9 appeared like a dream (as did my wife) and the rest of the race was fast and easy: One mile across some hilltops, one mile down Enger Bluff, and a final mile on paved paths, which felt like magic after so many miles of slick, wet trail.

Race Director Andy Holak Adds: “Ryan Braun, a perennial top finisher in the 50k stepped up to the 100k for the first time this year and smoked the course picking up the win and his first win at any Wild Duluth race. Anna Sortland was the first woman in the 100k, winning for her first time at Wild Duluth. In the 50k, Michael Borst led from start to finish to pick up the win in a blistering time for the conditions of 4:38. Hanna Grinaker won the 50k also for her first win at Wild Duluth coming in four minutes ahead of second place Emily Tholen. This was the first time in the nine years of Wild Duluth races that we’ve had any significant rain on race day. With the extremely wet summer and fall, it made for challenging conditions on race day. Next year will be the 10th anniversary of the Wild Duluth Races.”