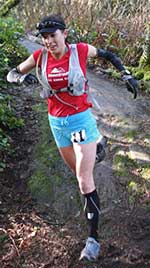 You know those times when you innocently say something and are met by a really odd look, and then you realize that you’re not talking to an ultrarunner? Well, that was the case when I was talking to a local newspaper journalist recently and referred to running the Vancouver marathon as “a good, middle distance effort.” Well what else do we ultrarunners call a mere 26.2-mile jaunt other than “middle distance”? After all, our usual races are a minimum of 31 miles and often much, much longer.

I know that some ultrarunners turn their noses up at racing marathons, maybe because road marathons are often mass participation events with a very different vibe to small grass roots ultra trail races. Or maybe because marathons are often commercialized, hyped-up events in major cities, far from the remote and peaceful wilderness of many trail ultras. Or maybe, just maybe, it’s because we as ultrarunners are sometimes afraid to put ourselves up against a standard distance and an unforgiving clock and see if we can knock out mile after mile of evenly paced running. It’s not an easy thing to do and it can be somewhat intimidating. In a marathon there is nowhere to hide. If you go out too fast and stagger in the final miles, then your badly judged pacing is plain for all to see, compared to a trail ultra, where you can hide your bad pacing among the steep climbs and the technical terrain. But possibly it is for that exact reason that ultrarunners should take the occasional stab at a road marathon.

Whilst not all ultras require pure leg speed (think Hardrock, UTMB, Diagonal des Fous) if you are targeting at placing well in your age group, or improving on a previous year’s time, then there is a lot to be said for having a little speed in your back pocket. Marathon speed and the ability to hold a moderately hard pace for mile after mile are essential to perform well in ultras, especially now that more fast road marathon runners are dipping their toes into the ultra world.

My last two ultra wins were not just down to having endurance and the ability to run hills, they were also down to the fact that I could click into a moderately hard pace and just pound out numerous miles. In Chuckanut 50K back in March, I placed 11th overall but in the final split I placed 5th overall. The final split included a downhill section, which is my forte for sure, and about 10k of reasonably flat running on the Interurban trail. Whilst other runners floundered on the Interurban trail and struggled to maintain a solid, even pace I simply locked into a hard effort, which I was used to from marathon training, and clicked away the miles, and I had the confidence from my marathon- style training to know what level of hard effort I could maintain over those final flat 10ks. Comrades 89K was a similar, if not even more exaggerated, situation, as in the final 7k I averaged a pace of 3:59/k (6:25/mile). Although this is hardly rocket speed, it was certainly much faster than 99% of the runners around me. However, to me the pace did not feel overly fast, because although Comrades is a little more than two back to back marathons, I had averaged 3:52/k (6:13/mile) at the Vancouver marathon some four weeks earlier. Running 7 seconds per kilometer slower for the final 7k seemed to be a very manageable pace.

I also believe that marathon training and racing can bring a new mental strength and focus to your ultrarunning. Although I have run around 20 road marathons, there can still be something intimidating about going out for a tempo run with the aim of maintaining a good hard effort for, say, 13 miles. After all, you can judge whether such a training run is successful or not by whether your last mile is the same pace as your first mile, yet you know that that last mile is going to be challenging to achieve. Learning, through training, that you can tackle and maintain these hard efforts makes you mentally tougher and more confident in your ability to push harder in the latter stages of any race distance, ultras included. If you are out on a long training run on hilly terrain you can convince yourself that your pace slowed because the trail got steeper or the footing got more technical, and use these excuses to cover up the fact that your pace and effort are declining. But the roads don’t lie, and a flat road marathon is a test not just of speed, but also of grit and the mental toughness needed to hang on to pace, however tough the going gets. So if you are looking at improving your speed in ultras, you might want to look at signing up for a dreaded road marathon, and it might not be all bad – you might well spot Devon Yanko, Kaci Licktieg, Ian Sharman or Mike Wardian toeing the start line too.

This was a fun article. Having just done my first ultra (50K), I can appreciate the concepts behind it. I chuckled a bit about the 6:25/mile not being ‘rocket speed’ though. Being a bit heavier runner, and just starting running 3 years ago, I wouldn’t complain about those times at all– and would be quite thrilled, actually! 🙂