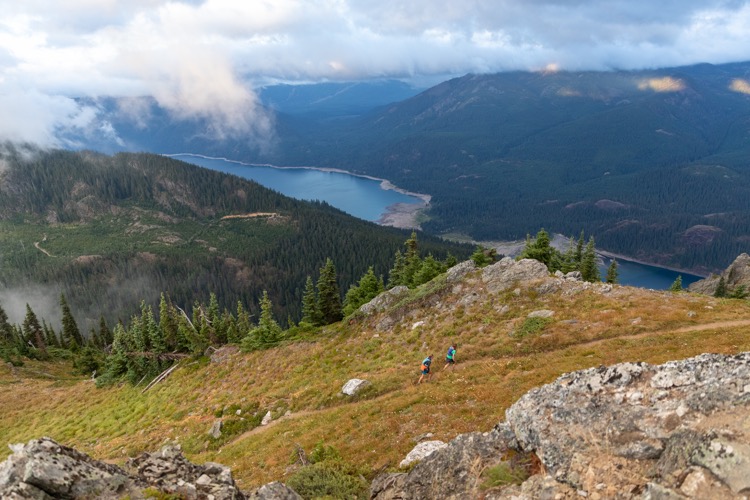 Runners take in the views during the 2019 Cascade Crest 100. Photo: Glenn Tachiyama

A Lesson in Ultra Economics

I lasted one quarter at Ohio University in Athens, Ohio. During this time, I learned which liquor stores would accept my fake ID and which bars served freshmen. Everything else is a bit fuzzy. I do, however, recall something my professor said on the one day I actually attended my Introduction to Economics class. I can recall this because he used beer and pizza as his example.

“If you have a six-pack of beer and an entire pizza all for yourself,” he said, “you’ll get more pleasure out of the first couple of beers and slices of pie, than you will out of the fifth or six beer and second half of the pizza.”

If my professor is reading this, I’m guessing he is probably saying, “What is he talking about, this isn’t at all what I said!” Regardless, this is how I remember it, so let’s move forward.

What I took from this lecture, aside from an urge to break out the beer bong, was that our level of enjoyment in things–when we are spoiled with them—diminishes over time as their shine starts to wear off.

A perfect example would be if you could have a Wagyu Tomahawk steak for dinner every night, accompanied by a fine bottle of wine and a babysitter who could entertain your kids for a few hours. At some point, around the fifth or six month, your level of enjoyment for the cuisine and freedom would diminish ever so slightly. Not enough for you to fire the babysitter of course, but enough that you might consider switching to lobster.

Clearly, I have zero understanding of how the Law of Diminishing Returns works in a business environment and am just daydreaming about a break from my toddler. But my complete misinterpretation of the lecture may hold some value right now in the COVID era—at least as it pertains to ultrarunning.

I waited until I was 34 years old to start running. Looking back, I know that I missed out on a lot. Perhaps I could have been a better runner? Maybe I could have had more experience running around the world, or earned my sliver buckle at Western States back when lottery odds weren’t so astronomical.

Until this spring, it was easy to put those thoughts behind me. I was enjoying running and I still had the drive to get better. I appreciated knowing that, had I run earlier in life, I might not be running today at all. I might have burned out or just not wanted to do it anymore. Finding running was a gift—one that pushed me to become stronger and more fit despite getting older.

I turned 40 in April and had big plans to run the Olympus Mythical Trail in Greece while spending a holiday with my wife. We even had a babysitter! But all our plans changed this spring and I have zero regrets. It’s not important in the grand scheme of things. But it’s still difficult not to look at the time we are losing from an athletic perspective. Time is our most precious commodity and we only have so many chances to make a cutoff or set a PR. Recently, I started to dwell on this. I worried that next year, if there are races, I won’t be as fast and that I’ll never be able to achieve the goals I had set.

But then I thought about beer and pizza and what that professor did or most likely did not say, and I realized something important. When racing starts up again, I will appreciate it so much more than I ever did before. I’ll cherish being around such wonderful people, running in beautiful places and just being blessed enough to be able to get out and run.

I’ll enjoy the hell out of it—just like that first beer.

Hi Geoff! I can’t recall his name, unfortunately. But I did enjoy my short time at OU. It’s a great school and fun campus! My parents graduated from there.