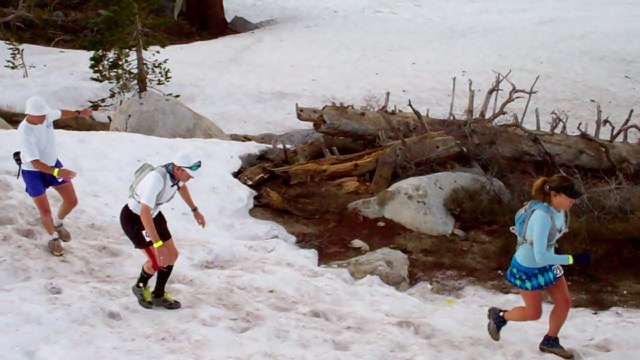 I hadn’t trained much that spring in preparation for the 2010 Western States 100-Mile Endurance Run. I had spent more time sitting in a chair next to a hospice bed that had been set up in the living room of Mom’s condominium. She was dying from colon cancer. When race day arrived in late June, I wasn’t expecting a great performance. The course had been re-routed that year due to higher than average snowfall. I remember running over mounds of snow with ankle-high divots in the high country with the amputee athlete Amy Palmiero-Winters.

I can still recall the uncommon focus Amy exhibited, how her movements seemed remarkable and how her presence made me – at least for about 40 miles – forget about my dying mother. Amy’s concentration seemed at a different level. Whenever the trail was dry, she would dart ahead of us like a finch soaring across a meadow. Her prosthetic leg, I soon realized, was in many ways just like the limb of any able-bodied athlete – an extension of who she was. The prosthetic was slim and sleek and a marvel of efficient engineering. Amy’s face was a marvel of concentration and commitment.

When we hit the snow, her determined stride would shift. She looked like a tap dancer, her arms shooting out to the sides to maintain her balance. Rarely, though, did she fall. When she did, those of us nearby would offer her a hand, but she would wave us off.

As we all attempted to cross a high-country stream, and we again offered her our hands to help, she explained: “It’s not that I don’t want your help. I don’t want to be disqualified if somebody helps me when they shouldn’t have. I’ve got this. Thanks.”

Those of us who ran with Amy that day got the sense that this woman, whose left leg was amputated below the knee following a motorcycle accident in 1994 and more than 25 surgeries, had long ago confronted any hesitation, or doubt, she might have had about running great distances on a prosthetic leg.

Somewhere around Last Chance at about mile 43, Amy pulled ahead of me. I dropped out at the river crossing hours later, torn by the thought that maybe I could have pressed on. There was no such conflict for Amy. She kept moving and became the first amputee to ever finish Western States, in a time of 27:43.

I hadn’t thought about Amy in several years. Not until November, when we all learned that the champion ultrarunner Dave Mackey had his left leg amputated below the knee. Dave Mackey has done about everything a champion trail runner could ever do, from earning Ultrarunner of the Year to running second at Western States in 2004 to establishing a course record at the legendary Quad Dipsea in Marin County in 2013. But the past year and a half had been terrible. He had endured 16 months of surgeries since he broke the leg after falling on a trail near his home in Boulder, CO, in May 2015.

There have been a lot of well wishes and love sent Dave’s way since his procedure. To his credit, he hasn’t shied away from explaining his rationale for the amputation. He’s shared some intensely private moments with the ultra world.

I admire Dave’s tenacity, courage and honesty. We all anxiously await his return to running. We know he will mount a successful comeback because that is who Dave is. As Dave wrote almost matter-of-factly a few days before his surgery, “I’ve decided to go this route.”

As much as we wish for Dave to succeed and to offer our help, we need to remember that we are only observers. This is Dave’s life. Like Amy Palmiero-Winters on the drifts of icy snow in the high country of Western States in 2010, we may wish to extend our hands to help, but ultimately, it’s an incredibly personal journey Dave is on, one in which he will decide the timing and the circumstances in which he needs our help.

Until then, we wait, hoping one day to run next to Dave, or behind him, or ahead of him, on a sometimes treacherous trail. And who knows? One of these years, it could very well be Dave who is extending his hand to us, helping one of us up from a fall in the snow in the high country of Western States.

Amy is a true inspiration!!