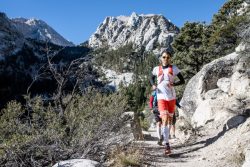 The 2017 UTMB winner smashed the previous supported FKT by over 12 hours, running the route northbound, and was the first person to complete the route under 3 days. His approach was unusual in that by choosing to run in mid-October he gave up daylight in exchange for cooler temperatures and easier access to hiking permits for the area. He also had pacers the entire way, probably a first.

“I didn’t vote for François D’Haene’s JMT, because it seemed “too supported,” maybe beyond the spirit of FKTs for a true wilderness route.”

“Huge advancement here, will pacers the entire way become the new norm on the JMT?”

“François crushed it with a brilliant combination of athletic ability, unmatched support, and a unique approach of doing the route in October.”

“He had support up the wazoo but turned it into a spectacular time.” 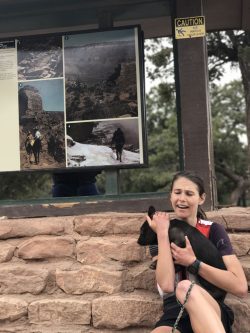 The R2R2R is one of the most classic routes in the world. Bradley made it a major goal, and turned in an excellent result, besting Bethany Lewis’ 2011 FKT by more than 23 minutes.

“R2R2R is becoming as supported as a race, especially the way Cat did it. But still it is a fast time and it’s impressive.”

“Elite run by an elite ultrarunner with elite crew and pacers – like a ‘Pro-FKT’ – but awesome.”

“I loved her comment that WS100 (which she won) didn’t matter, only the Canyon mattered. I think comments about support and pacing are irrelevant for this route.”

“I hope that more women focus on this FKT in the future, as l like this route, maybe because I once held the record – which was handily shattered!”