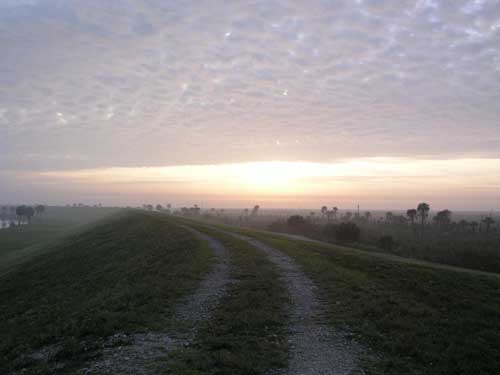 View of the course

The LOST118 has been run atop the Herbert Hoover Dike, around Lake Okeechobee, for the past eight years.  The Dike was built by the Army Corps of Engineers to protect the surrounding areas from flooding after the hurricanes of 1926 and 1928 killed thousands.  Lake Okeechobee is the largest freshwater lake completely within a single one of the lower 48 states. Okeechobee covers 1,900 square 730 square miles (approximately half the size of the state of Rhode Island) and serves to collect and funnel water into the Everglades.  It nurtures a vast and diverse wildlife population including alligators, black bear, bald eagles, Caracara, wood storks, wading birds, bobcat and renowned sport fisheries.  The Lake Okeechobee Scenic Trail (LOST) runs along on top of the Dike.  All but about 20 miles are paved bike path and the remaining unpaved section is rough coquina rock and grass.  There is mowed grass along the side of the bike path for those who prefer a softer surface.  The course goes over, or around, several rivers and canals that enter the lake.  There are 2 large bridges and several smaller bridges and locks to cross.  The course detours through town for a very short distance at the site of the 2 Intercoastal Waterway bridges.  The Corps of Engineers has been in the process of repairing and reinforcing the Dike for several years.  Due to construction closures the LOST118 race course changes every year.  The race has started in Okeechobee (at the north end of the lake) and Clewiston (at the south end of the lake) and for each of the past several years a small portion of the course had to be run on the roads that parallel the Dike.

The 2014 version of LOST118 started in Okeechobee on February 15th and ran clockwise around the lake.  There were 17 solo runners starting and two 2-person relay teams.  Race Director Scott Maxwell sent the pack off at 7am under breezy and partly cloudy skies.  About half of the solo runners had crew with them.  Crew can meet their runners at about 25 access points around the course.  The longest segment that is not accessible to crew support is about 8 miles (depending on construction).  There were 7 manned aid stations and unmanned colors every 5 miles or so.   The wind stayed strong under sunny skies for the day on Saturday and a full moon lit the trail at night.  The temperatures did drop into the low 40s at night but the manned aid stations kept the runners warm and fueled.  The winds dropped at night and Sunday rewarded the participants and volunteers with blue skies and temperatures rising back into the 70s.

The Course Record is held by Jamie Donaldson who flew around the Lake in 2010 in a time of 18:36:15.  It looked like Ms. Donaldson’s record was in danger of being taken away by Grant Maughan for most of the race.  Grant was coming off a string of impressive runs at Badwater (2d place), Brazil135 (2d place), Bartram (CR record shattering the old by over 3 hours), HURT,  Yellowstone Teton 100 (3rd place), Superior Sawtooth 100, Leadville, Keys 100, and Atacama Crossing Chile.  He was a late entrant to the field and was supported by the ship’s crew of the private motor yacht he captains.  Grant ended up missing the overall record by 15 minutes with his 18:51:04 finish but did secure the Mens’ Course Record.   Grant ran alone for most of the race but is thinking about how the race would play out with a pack at the front.  “It would be stressful with a leader pack as you can see so far behind you (and ahead).  In some sections it would be like that serial killer in the movie that’s always chasing you. I think a leader pack would keep the speed up until you dropped as it’s a fast course”

View of the course

The ladies showed strong with second overall going to Jennifer Carvallo (27:40:15) and second woman/3rd overall going to Clare Dorotik (28:35:57).   The second Mens’ finisher was Wayne McDaniel in 28:36:02.  The relay teams ran well and the ladies team bested the mixed team in a close finish.

Plans are already being made to make the 2015 version (to be held February 7th and 8th) of LOST the best ever.  Regardless of the construction, the course and the weather, one thing that won’t change is the great volunteer effort that made the 2014 running such a great success.  Ramon Barreiro-Soto said “Best support staff of any race I’ve done to date.  Everyone who was there went above and beyond … I think the lake was glowing that night from all the positive energy … or I was hallucinating”

Great race report Sue Anger! What you left out was your unending passion for leading the aid station volunteers in pursuit of making sure that each and every runner had a great race experience. See you at the next race!

Cheers for the report, Sue.
Yes, its a fast course. Bit like doing a Nascar loop….Thanks for your hard work out there…

Sounds awesome. I look forward to running Lost 118 some time.

Had a close friend complete the challenge this year…. This is a “must do” ultra race challenge for the true enthusiast from what his feedback was. He will be back again in 2015 and he is taking me with him.