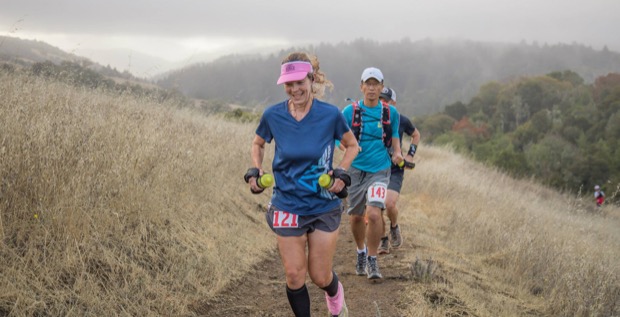 Racing Astride the San Andreas Fault

Saturday, September 27th saw the inaugural Stevens Creek Striders 50k, 30k and Half Marathon in the Los Altos Hills, CA. Since 2002, the 50k race has run under the banner “Steve Patt’s Birthday Run” or “Stevens Creek 50k.” But this year Steve handed off the race to his Cupertino, CA based trail running club. With that transition, the Striders added 30k and Half Marathon variants to this USATF sanctioned event. A club since 1982, the Striders has morphed from a largely road running club to an ultrarunning group and has run the Last Chance Aid Station at Western States for the last 33 years. Taking on Steve’s great race puts the Striders squarely on the race map.

The 50k course is effectively a bottom-heavy figure-of-eight, so the lower loop generated the 31.4k course and the top loop the half marathon course, all with a common start and finish point. The beautiful 50k all-trail course runs through five Open Spaces on either side of the San Andreas Fault with a total climb of some 4,640 feet.

Consistent with UltraRunning magazine’s title, this report focuses on the 50k race, but it is noted the shorter length races worked out well for many runners, including a good proportion of first timers, who finished the hilly course with beaming faces.

In many previous years, the race has been during relatively hot spells, so this year we advanced the start time from a leisurely 9 a.m. to 8 a.m. The early starters, who expected to take more than seven hours, headed off at 7 a.m. at first light. However, this year turned out to be cool and misty over much of the course, with the sun burning through in the middle of the day. So while the many volunteers shivered through their work, it made wonderful running conditions with dampness underfoot, which kept the dust down.

Some 35 volunteers supported the races with course markings deployed the previous day, two water stations and three full-service aid stations. Our friends from nearby Quicksilver Running Club manned two of those stations. The Striders have operated a key aid station at the Quicksilver ultra-races in May for years. Without the effort of all our volunteers, the race could not exist. The day after the race, a subset of the volunteers reconvened to run the course for their share of the fun.

We had our medic, Kristan Wheeler, on the course, who happily only had three twisted ankles and a few scrapes to tend to amongst the racers. However, during the race she did apply her skills to a motorcyclist who came off his bike on Page Mill Road.

Part of the registration fees were donated to good causes: to Team Andrew in memory of Andrew Johnson and the Leukemia and Lymphoma society and to the Santa Clara Valley Audubon Society.

Jose Cruz of Gilroy, CA won the men’s 50k in 4:38 and Jennifer O’Connor of Walnut Creek, CA won the women’s in 6:06. Forty-eight runners started and 40 came through to the finish line. Everyone expressed how much they had appreciated the volunteer’s great efforts and enjoyed the race, the cool conditions and the stunning scenery.