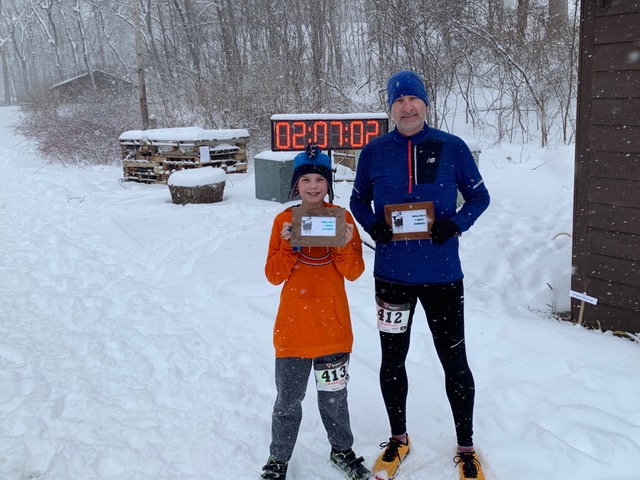 It was 2018, and Kevin Mathewson was in the zone. He was fresh off a personal best at the Bear Chase 50K in Morrison, CO, and had recently crossed the finish line of his first 100-mile race at Tunnel Hill, in Vienna, IL. A few months later, he found himself sitting in a doctor’s office, mind racing, awaiting the results from a biopsy. The news was not good. “I was diagnosed with an aggressive form of prostate cancer.”

Kevin grew up in Illinois, the youngest of four brothers. “I enjoyed sports but wasn’t super athletic. I decided to run track and though not the fastest, I had a knack for running hurdles.” Kevin’s older brother, who was on the cross-country team, inspired him. “Though I was the annoying little brother, I got to hang around him and his teammates. I thought they were so cool, and it looked so fun to be a part of a team. I knew then when I got older, I was going to be a runner.” 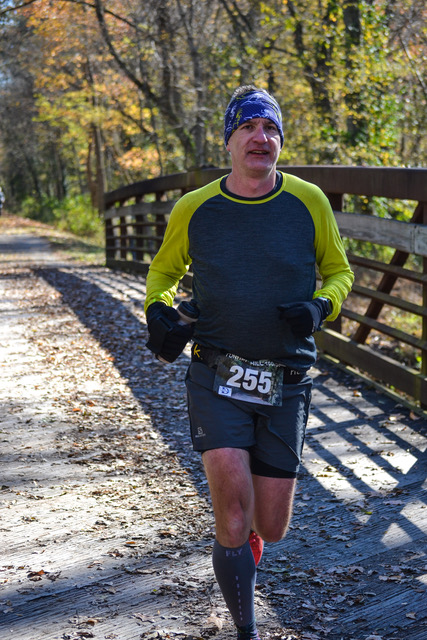 On course during the Tunnel Hill 100 in November 2018. Photo: Phil Weinzapfel

Kevin attended Liberty University in Virginia. “As a sophomore I did manage to make the track team as a walk-on. Coach wanted me to try the steeplechase, which was my first foray into distance running.” His running plans would soon be put on hold, however, with a college transfer and his new school lacking a track or cross-country program. Running would have to wait.

More than two decades later, running reentered his life. Kevin was in his 40s, and his coworker provided some long-overdue inspiration. “My friend was involved in trail running and ultras, and was even an RD for a local race. He was running a 100-miler and wondered if I would be interested in pacing him.” Kevin agreed and thoroughly enjoyed pacing his friend along a 10-mile loop. A few years later in 2015, his pregnant co-worker and friend guilted him into a 10k. “I signed up with two weeks to go and decided my first training run was going to be a 10k. If I couldn’t complete it, I wasn’t going to race.”

Kevin found solace in a nearby park and began a walk/run regimen. “Obviously I had no idea what I was doing when it came to training, but it worked and I completed the 10k race running the entire distance.” As Kevin was training for his 10k, his friend who ran 100s convinced him to pace again. “As I ran/trained over the next few weeks, I really came to enjoy the distance runs and my weekend warrior mentality convinced me I could do more than 10 (miles).” 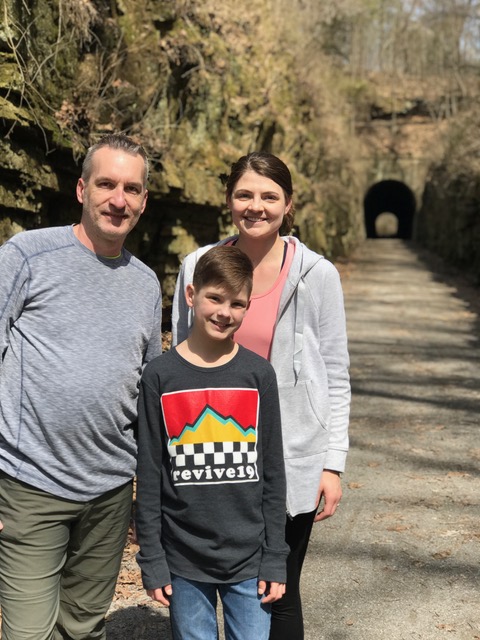 Kevin with wife Ellen and son Adam in March 2019 at the tunnel from Tunnel Hill 100 a month and a half after his surgery. Photo: Curt Westra

Not long after, Kevin found himself at the starting line of his first ultra and focused on soaking up the entire experience. Out on the trails, the world opened up, “I still remember looking at my watch at 26.2 miles and realizing I had just completed a marathon. By then I was mostly walking, but I was having a blast. I finished and knew immediately I was going to do another one. I had found a new love: trails and ultras.”

Following his cancer diagnosis, surgery had been slated for February 2019. Post-surgery, Kevin would be unable to run for eight weeks while he recovered. “I remember going to my eight-week checkup and finding out that the post-surgery pathology results showed not only that the cancer was a higher grade than initially thought, there were also positive margins (meaning they might not have gotten it all).” The bad news was that further treatment would be needed. On a positive note, he had been cleared to run, which provided a glimmer of hope. “The first thing I did when I got home was put on my running shoes and hit the roads. It felt so good – like I was flying – but it was a slow two miles with some walking. But still, I was running again.”

Kevin’s immediate goal was to get himself back to the starting line of ultras. “That focus helped keep my mind off my cancer. Two months later I returned to racing with a trail half marathon.” After that race, it was time to pivot back to his treatments. “After six months of healing, it was time for radiation. I don’t know how I got it in my head, but I decided to do a “Radiation Run Streak.” Though I never had a run streak before, I was determined that radiation wasn’t going to get the best of me, and I was going to run every day during my treatment.” 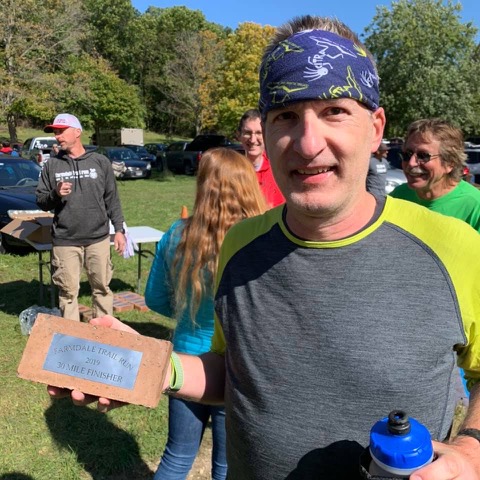 Over the following two months, Kevin dug deep. He had 39 radiation treatments spread out over 57 days. “I ran every one of those. Instead of thinking about my treatment, I was thinking about my next run and how I was going to fit it in. I definitely felt the fatigue and saw a decline in performance through the treatment. Still, I managed to average almost four miles per day during that time. In the middle of treatments, I raced the 10k (the same one that started it all in 2015) and set a 10k personal best.” Two weeks after finishing his final treatments and only 11 months from his 100-mile finish, he ran the Farmdale 30. “That finish was almost as emotional as my Tunnel Hill 100-mile finish. I had overcome.”

When I asked Kevin how he managed to stay positive through it all, he paused, “I wish I could say it’s been all lollipops and rainbows since then. I’m trying to keep perspective. God brought me through all of this for a reason and even when I’m not sure why, He’s taken care of me. I can truly tell people everything’s okay, because God’s in charge. I’ve been cancer-free now for two years. My wife has had her own cancer journey a few years before mine. We are both grateful for life and health. We have an awesome son. Running isn’t everything, it’s just one thing. I want to enjoy it as long as I can but at the end of the day, I’m much more than just a runner.”

Great story, so proud to know you, Kevin

I can relate! My prostate cancer was a less aggressive kind, I didn’t have to do the surgery but did a very similar course of radiation treatment. I was a cyclist at the time and kept riding through the treatment. The weekend after the last treatment I did a 100-mile ride to celebrate. 🙂

What an awesome message and story! Great attitude, great karma, Kevin! Thank you for sharing. You will inspire many. Everyone has a story, and I have a feeling the purpose of you sharing yours will be so that others will share theirs!