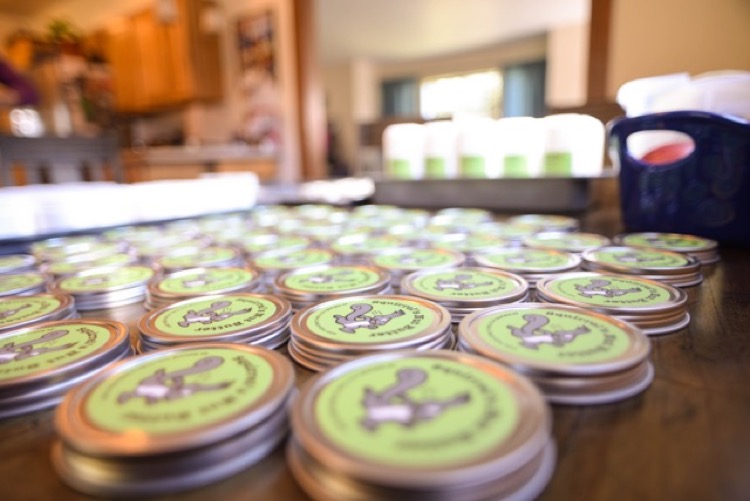 Squirrel’s Nut Butter: The New Name in the Anti-Chafe Industry

One of the most painful experiences in distance running is a bad chafe. Armpits, thighs, feet, and more – we have all been there and experienced the horrible burning sensation when sweat, friction, and raw skin collide halfway through a race or training run. It can debilitate an outing and ruin anyone’s day, especially in extreme temperatures when our sweat rates increase. For years there have been only a couple of major players in the anti-chafe industry that have been used by distance runners and endurance athletes alike. A small company based out of ultra-endurance mecca Flagstaff, Arizona has emerged with a new product that has professional athletes and weekend warriors ordering batches of this new, all-natural, anti-chafe salve that has been said to work miracles.

Squirrel’s Nut Butter was developed by Chris and Stacy Thornley out of their home in Flagstaff, Arizona. Stacy first engineered the natural salve in hopes of healing her daughter’s eczema, without the intention of creating a product that would find its way into thousands of runners’ homes across the country by the end of 2016. The Squirrel’s Nut Butter name originated from Brian Marshall, a local Flagstaff-based arborist whose nickname ­– Squirrel­ – was given to him for his knack of climbing trees professionally. A good friend and co-worker of Thornley, Marshall got ahold of some of the ‘yet to be named’ magical salve and decided to use it as chafe prevention for a long mountain bike ride in Sedona when he forgot his regular anti-chafe product at home that day. Marshall didn’t chafe once throughout his four-hour ride. The rest is history. In 2015 Chris and Stacy Thornley founded Squirrel’s Nut Butter and began promoting the product in the ultra-running and endurance communities.

The Thornley name may be familiar to you as Chris’s brother Craig Thornley is the current race director for the Western States Endurance Run. The Thornley brothers have been running ultra-marathons for over a decade and grew up right down the street from the iconic Western States trail.

If their new found business wasn’t enough of a surprise to Stacy and Chris Thornley, the family of five encountered their very own squirrel friend in 2016. The Thornley’s rescued and rehabilitated a local squirrel that they named Timber. Chris Thornley rescued the young squirrel from a tree-removal site and along with his family helped rehabilitate the squirrel with the permission of the local Fish & Wildlife service. Timber was successfully reintroduced to the wild shortly after. He made sure, however, to thank the Thornley’s for their kindness and hospitality by posing for some photos before he made his way back into the ponderosa pine forests of Northern Arizona.

Timber the squirrel poses with some of Chris’ buckles. Photo: Nico Barraza

As with any new product, there is always warranted skepticism. So, instead of just taking the advice of all the distance athletes who have had success with Squirrel’s Nut Butter, try out a batch yourself. Their products can be found at www.squirrelsnutbutter.com and via Facebook and Instagram @SquirrelsNutButter.

Timber is reintroduced into the forest as Chris Thornley looks on. Photo: Nico Barraza

Yep SNB is great for athletes and all of the rest of us too! I use it for those dry spots on my hands and face and it’s great for those cracked heels as well. In fact I like it so much I shared it with others as stocking stuffers and will be gearing up for Valentine’s Day right around the corner! Thanks you Chris, Stacy and Timber! ?

this seems like an advertisement (which of course, is fine). i am a runner (of relatively long distances) that sweats a great deal no matter WHAT the temperature is, so anti-chafe cream is important to me. the best i’ve seen is cramer’s skin lube. i’ve tried many, many others and none have matched up. i’d like to see a product comparison (maybe done by someone not in flagstaff) of skin lubes with SNB in the mix. would happily try out a free sample in a swag bag… and sure, i personally don’t mind trying out something new even if it doesn’t work by simply buying it. a proper comparison, context re ingredients, a little bit more information would be nice. the fact that sponsored athletes wear it tells me nothing… what are the differntiators!!

My 11 year old surfing son uses it on his neck and it’s been great for preventing wetsuit rashes. San Diego

Well-deserved praise for two of the nicest people you’d ever want to meet. And I love their product, too.