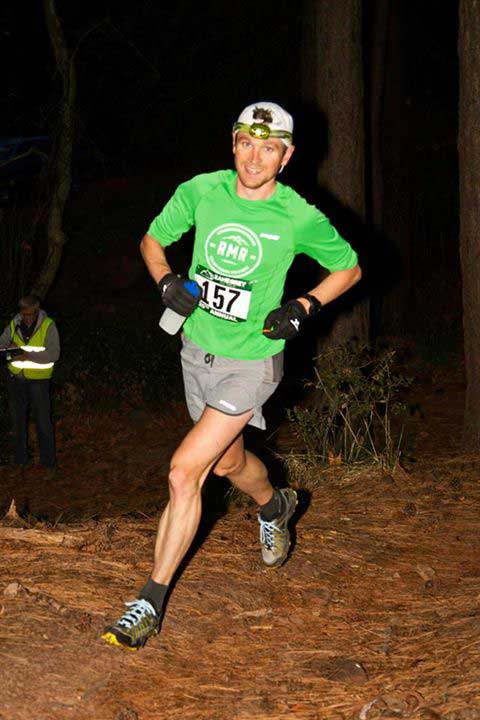 Quick & Dirty: You just won the Sean O’Brien 100K in 8:41:41 on Saturday, February 7, thereby gaining entry into this year’s Western States 100-Mile Endurance Run. I was following along via social media updates, and it seemed like Seth Swanson (2nd place at last year’s Western States) was breathing down your neck for quite a while, but you ultimately ran to a 15-minute margin of victory. How did the race play out?

Ryan Smith: I had actually run the first 12 miles or so with Ruy Ueda, a Japanese runner making his overseas debut here. I felt the pace was reasonable but quick so I was surprised to see Seth catch us towards the second big climb. I was not aware that he was actually in the race, but I was glad that there were three of us up front to keep thing honest. Seth looked really comfortable when he caught us and I was starting to feel a little beat up on the first big descent of the day so I was certainly a little concerned with the extra pressure. Luckily, we had a great time chatting away for the next several miles, which took my mind off the fatigue, and after leaving the aid station at mile 23 I started to feel better on the climbs. Shortly after the 50k mark I put a little distance on Seth on the climb and lost sight of him. From then on I really had no clue how far back he was but I went with the assumption that he was always within striking distance. Luckily, or unluckily, at the 50-mile turnaround everyone gets to see their relative position, and so I found out I had about a 9-minute lead. I tried to put in a solid effort on the last big climb but I did find myself with a couple of short walking breaks for the first time of the day, which made me slightly nervous. After the top of the climb I did my best to tackle the final 7-mile downhill to the finish but I really didn’t relax until the finish line was in sight!

Q&D: What were your goals and expectations coming into the race? Were you confident in your fitness?

RS: A few of us in Boulder ran a fat ass local 100 miler in early December ,which did give me a little concern for such an early season race. I knew my endurance was good but the speed was a bit of a question mark. That being said, my goal for Sean O’Brien was to run the entire race as I thought, regardless of pace, that would put me in a good position.

Q&D: What are your racing plans for the rest of the year?

RS: Well, I am going to have an interesting summer with Western States and UTMB [the Ultra-Trail du Mont-Blanc] now on my calendar! My next commitment however is to the New Jersey marathon in April. I would like to break 2:30 if possible. Outside of that, it’s probably going to be a few last minute decisions on local races around the Colorado/Utah area, which always have great courses and world class competition!

RS: The 100-mile distance, so far, has seemed to suit me. I ran every step of both races, which really surprised me. I seem to be lucky in that I have a cast-iron stomach and can basically eat and drink anything during a race. It’s kind of like the Back to the Future car, where you just throw any old junk in there and it seems to keep the engine running! Aside from that, I’m really good at suffering, which seems to be the biggest ingredient for success in these kinds of events. I think it’s a combination of stubbornness, experience and stupidity. I seem to excel in all three. My biggest concern with Western States is the heat. I am Scottish and we are not known for our resiliency to heat!

Q&D: You’re originally from Scotland, though you now live in Boulder, CO. Can you tell me a bit about your roots and when you moved to the States/Boulder?

RS: I was born in Scotland but mostly grew up north of London. I started running in high school and have never really stopped. I was actually men’s captain of my University running club, but that’s probably more of a testament to my drinking abilities than my running prowess. I’ve probably gotten more serious about running since I moved to the States in 2006. I lived and worked in Manhattan for several years before moving to Boulder. The accessibility of the mountains and the more laid-back lifestyle in Boulder has definitely enabled me to take things to the next level.

Q&D: Your wife, Silke Koester, also had a great race at Sean O’Brien, finishing third female in 11:11:58. How does it feel to race together at such a high level?

RS: Well it certainly helps to have a wife who can pace you for the last 40 miles of your 100 milers! We obviously spend a lot of time involved in this sport and so it really helps that we both appreciate each other’s dedication and efforts to improve. Silke and I have a similar outlook and approach to this sport: although we take it seriously, our main motivation is the experience, so neither of us gets too caught up with training, structure or results. Most of our vacation time is spent traveling to amazing places running just for fun; in fact, right after we got married we took an entire year off to do just that! At the race this weekend we actually got to see each other on the out-and-back section to the mile 50 turnaround, which was a well-timed boost after that particularly grueling part of the course!

Q&D: Together with Silke, you founded the Rocky Mountain Runners (RMR). On your website, you describe the group as “a social bunch who love running, drinking and eating and, if at all possible, like to combine all three together!” Can you tell me a bit about the club’s origin and how it has grown?

RS: The UK has a really healthy social running club scene and so when I moved to the U.S. my first thought was to join a club there. I was spoiled for choice with over 100 local running clubs to pick from! I met most of my friends through my club in NYC and of course that’s where I met Silke! When we moved to Boulder we wanted to recreate that sense of team and community that we were a part of in NYC. RMR was started with a group of friends and with that goal in mind and we’ve had a lot of fun putting it together. We have organized group trail runs every day during the week, social events at local breweries after the runs, monthly socials involving no running at all, branded gear so we can look awesome at races and generally just getting people excited about belonging to a group of like-minded people who spend way too much time in the mountains and probably too little time at their jobs!