Grace Staberg is a student and endurance athlete in Summit County, Colorado. She runs ultras in the summer as part of the Summit Endurance Academy and this past summer ran the Power of Four 50k and the Grand Traverse Mountain Run. In the winter, she is a Dynafit Skimo athlete, competing on the US National Team both in the US and Europe. When not finishing high school, working on the ranch or racing, she can be found on long adventures in her backyard. She’s gearing up for her first hundred miler this coming year and of course, college, so she can at least be an *intelligent* adventure bum. She can be reached at grace.staberg@gmail.com.

I’m a young girl. In sport. And nearly four years after the diagnosis of my eating disorder, I am finally healed enough to discuss it. In the past few years, my coaches have been nearly the exact opposite of those involved in the horror stories from USA Gymnastics or The Oregon Project. However, before that, my experience in sports was fraught with the issues and pressures most young girls face. It seems that we’ve all come to a realization that it is time for the broken system to mend. But how?

The first step, a plainly obvious step, is to acknowledge that there is indeed an issue. It’s easy to be selective about how we remember our experiences. If you were to ask me about my experience as a middle school cross country runner, I would first have an overwhelmingly positive response. Yet, when I take a moment to reflect and really think about my beginnings as a runner, my blood begins to boil. I now love running and have a healthy relationship with endurance sports, competing as a sponsored runner in the summer and a ski mountaineer in the winter. However, for nearly three years, after finding running in middle school, I was ravaged by an eating disorder that began as a quest for control and was perpetuated by the idea that being light would make me fast, which would in turn complete my identity as a runner.

You see, to eighth grade Grace, it felt like everything was falling apart. It was a combination of many little things that sent me into an uncontrollable spin. Something happened at school that made me feel unsafe in the place which I had previously loved. I was surrounded by peers who were just as intelligent as me, and by teammates who were equally as talented. My sister, five years younger, was more gutsy than I was on the ski team (she’ll still drop things bigger than me if we’re being honest). I was growing and puberty is a female runner’s worst enemy. I could go on but the point was that, to me, it felt like my life was out of my control. I had lost my self-confidence and with that, my identity. Cross country though, made me unique. It gave me a place and a purpose. The internet had told me that to be fast you had to be skinny, and my coach didn’t seem to disagree. So with that, I fell apart. It no longer mattered to me if I couldn’t win a race outright, because I could place in the top five without eating. In my sick, desperate mind, that made me strong.

For a while, I did get faster. A lot faster. I was doing really well both on my team and in the region. I made it to states. But I was withering away and all the while, no one said anything. I refuse to accept that my coaches didn’t notice. Soon, the previous success I’d been having wore off because losing weight only works to a point. A teammate’s dad told my parents that it looked like I was running through sand while racing, and I certainly was no longer performing well. Each race felt like a climb up Mt. Everest because my body had nothing left to give. I passed out on a start line. Then, the day before my race at states, my mom picked me up from practice and drove me to the hospital. The doctors said that had I raced the next day, they were fairly certain I would have passed out and the health of my heart would have been in mortal peril. A few weeks prior, I had undergone surgery and it had taken me hours to come out of recovery because my heart rate was hovering around 30.

I knew I could control my weight, so when everything else was out of my control I grasped to this one strand I had left. I thought that if I was lighter I would be faster; if I had willpower I would be stronger; if I could have more control than the other girls I could win. I was so, so incredibly wrong and I desperately wished that I would’ve had a coach like I do now to instill this upon me. I am incredibly grateful that my parents eventually realized that I was not, in fact, “OK” as I had been saying for months, but rather, that I was killing myself. Yet it breaks my heart that my coaches didn’t realize what was going on, for it was clear (believe me, it was clear) that I was withering away and that my times were suffering drastically. 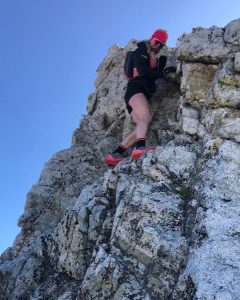 I have to laugh whenever people tell me a workout looks hard or say that they “don’t know how I do it,” because running up a mountain in -40 degree winds has nothing on the years that would ensue. For the next three years, my parents, bless their hearts, fought tooth and nail to keep their daughter alive. I took a hiatus from running, skiing and being a teenager, because each moment of every day was dedicated simply to staying alive. The pain your mind can inflict upon you is unrivaled by any physical pain you may experience. Nearly three years after I was first diagnosed with anorexia nervosa, I had gained the necessary 25 pounds back, I developed a healthy relationship with exercise and I managed to let go of most of the grief and hopelessness I had been harboring for years.

Yet, it took me a while to truly process this phase of my life. I finally feel as if I’ve reflected upon it enough, and that I’m in a good enough space to share it. It is incredibly hard for me to write this; to admit that I struggled with such an extreme eating disorder. The stigma around mental health issues and eating disorders is suffocating and for the longest time, I was terrified about how people would view me or if they would respect me after I shared my story. But this no longer matters because my heart has been broken after hearing Mary Cain, Amelia Boone and others speak out about their mental health struggles. I share my story not for pity or sympathy, but with the hope that by speaking out about this issue we may be able to prevent it from happening to other young girls.

I guarantee you that not a single one of my coaches intended to encourage me to develop an eating disorder, yet the encouragement is already there in literature, in peers/teammates and on social media. So, that being said, coaches need to be diligent about watching for athletes that may be struggling and young girls need to be discouraged from falling into this trap. My current coach likes David Roche’s saying, “Eat enough: always, eat too much: sometimes, eat too little: never.” By telling this to his athletes, he is encouraging good nutritional habits. I’d like to think that I wouldn’t have succumbed to the disorder if a coach had educated me on the dangers of not eating enough; for I never knew I could lose my period, develop osteoporosis, have organ failure, get orthostatic or ruin myself with low energy availability.

Today, I am vowing to contribute to the betterment of the running culture so that more young athletes know of these dangers and are encouraged to take a different path. It is time that we speak out about our past, against the dangerous undertones present in the cultures of many sports and for the betterment of girls in sports. No race result or finish time is worth killing yourself over.