By Claire Dorotik-Nana
There are many things about ultrarunning that are hard to describe, and even harder to understand. The Spartathlon, a 153-mile race from Athens to Sparta, is one of them. As the history is told, the race was started as a way to resurrect – and perhaps prove possible – Pheidippides’ historic run to warn the Spartans of the approaching Persian army, and ask for their help in fighting them off.
Many say that run single handedly saved Democracy. Had Pheidippides not been able to reach Sparta in time, their army would have never been able to defeat the ruthless Persian army that outnumbered them by the thousands at the battle of Marathon.
It is a significance that, today, is not lost. As a long-time volunteer of the Spartathlon told me, for the Greeks, the Spartathlon represents a core virtue: pushing yourself beyond your limits, an exemplary example of what becomes possible when perseverance takes over and a person simply refuses to be pushed back by the heat, exhaustion, and grueling time cutoffs of the race. For the Greeks, it is more than physical development, it is mental development, and considered a fundamental component of their nature – this is also why many volunteers bring their children to witness the race as a way to enhance their personal development. In fact, the first Japanese runner to finish the Spartathlon, a young man by the name of Timothy Nishimura, had been sent to the race by Hiroshi Ogo, the spiritual teacher and mentor his father had hired to assist in Timothy’s development. The race was to be a significant step in his maturity – especially because he had no previous running experience. 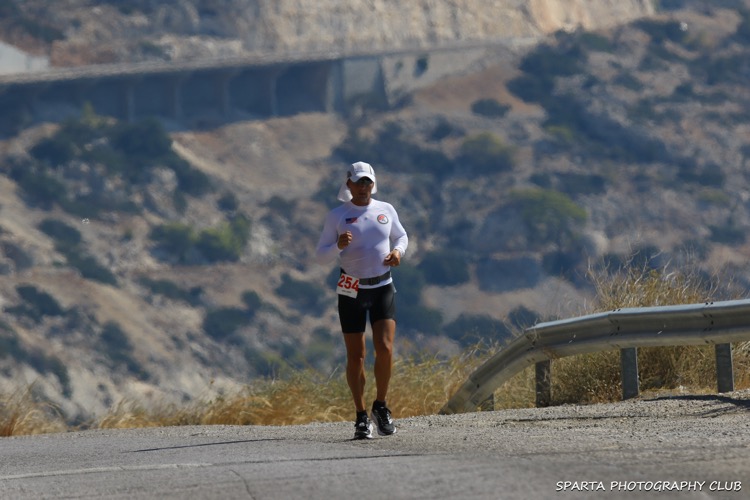 A Reverence Like No Other
Mario Fournaris, the Greek Spartathlete with 14 finishes (the most of any Greek runner), believes there is one thing that distinguishes runners who successfully finish the Spartathlon and those who find themselves abandoning the race early, unable to continue. That one thing is absolute humility. As Fournaris relates, “To finish, you have to approach it (the Spartathlon) with the utmost respect, with great modesty and above all with love.” Any thoughts about performance or current position, Fournaris contends, should be replaced by thoughts about simply finishing – no matter how many times a runner has run the race. Pride, ego, and hubris all have no place in the Spartathlon because the competition is not against the other runners – it is against the self. “If you do think of other runners,” Fournaris says, “it should only be how you can assist them.”
It’s Hard Not To Fall In Love
The thread of altruism runs deep at the Spartathlon, acting magnetically – perhaps even spiritually – on all who witness it. Fournaris explains, “I remember in the 80s and beginning of the 90s, when running alongside the Japanese runners and nearing the checkpoints, they would automatically increase their pace in order to reach the station first. Then, we’d once again meet up and run together, until the next checkpoint when they would increase their pace to once again be the first to reach the station. This came as a surprise to me and I was determined to investigate why they did this. After a little investigating, I discovered why: so they could be the first to sit on the ground leaving the few available chairs for the other runners. So polite and unselfish were those first Japanese who ran the Spartathlon.”
Then there are the stories of athletes sacrificing their own race to help a fellow finisher. Like the time in 1992, when Finnish runner Seppo Leinonen gave up his position to help a French runner finish, or in 2004, when another Finnish runner, Janne Kankaansryrja, slowed his pace to stay with an Austrian runner, seeing him to the finish. In both cases, the Finnish runners could have finished third but instead chose not to finish on their own. They chose to abandon victory in the last few meters, instead staying behind to help an exhausted “opponent” runner finish. (Note: A similar event happened when Ivan Cudin – who has won the race more than once – chose to finish instead with Stu Thoms.)
It is stories like these, that runners like Leinonen, Fournaris, Cudin, and many others, say made them fall in love with the Spartathlon. 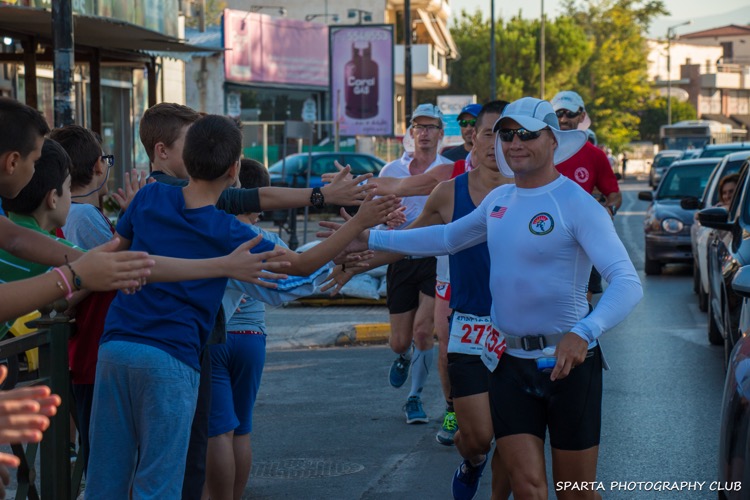 The Spartahlon route is lined with Greek families and children reaching to touch the hands of the runners. Photo: Sparta Photography Club.

An Incredible Feeling
For many runners, the Spartathlon is not only perhaps the greatest physical test they will put their bodies through, like Ogo recognized years ago, it is an extraordinary mental challenge, and one that renders its participants transformed. As Fornaris relates, “You enter into another dimension. Everything is beautiful. Fruits are golden on the trees. The cars that bothered you all the route, are now objects of beauty. Everyone is uniquely beautiful. So I’m wondering whether the girls I meet in these last steps are really the most beautiful women I’ve ever seen in my life or it is the point that just gives me that feeling.”
Many believe the conditions are similar to those of extreme combat – and those that cannot be replicated under normal circumstances. Yet this is a battle with the self – a fight to continue, to complete what seems like an impossible task – and one that often lasts more than 33 hours. On the other side is the most incredible gift. Fournaris explains, “So, when after all this hardship, your body sprouts wings and you fly – this is what happens at the finish – it’s something unique. It’s hard to describe in words and is perhaps the strongest feeling I have lived in my life. It remains pure from the first day that I felt it, up until this present day, even though so many years have passed.”

The Spartathlon may be described as a 153 mile race from Athens to Sparta, but for many, it is a journey within, one that often doesn’t have words, but only feelings. Feelings so powerful that they cannot be replicated anywhere else. And so they return year after year to once again, face the challenge, and emerge humbly, yet perhaps with wings upon their backs.

Claire Dorotik-Nana M.A. frequently writes for International Sport Science Association, Professional development Resources and Zur Institute. She also pens the popular blog, “Leveraging Adversity” at Psychcentral and is the author of Leverage: The Science of Turning Setbacks Into Springboards.