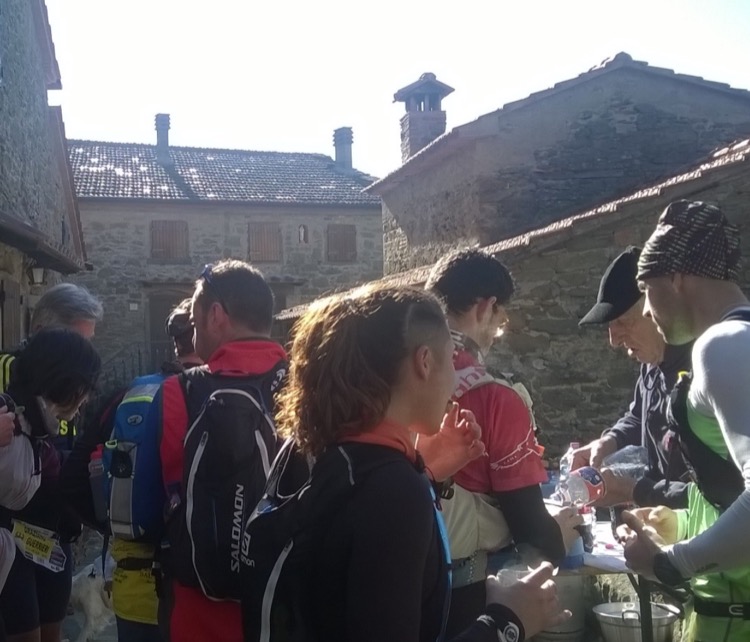 I decided to run a couple of trail ultras during a skiing holiday in Europe, and since there seemed to be lots of them on the Italian running calendar I thought, why not? I’ve been studying the language and I thought the race food would be good. I’ve found skiing and running to be compatible, to the extent that both build endurance but with different effects on the mind and body. Different muscles, different mental control. Both require important decisions to be made under stress.

The first trail race I tackled was the 44 kilometre Ecomaratona Clivus in northern Italy, a tour through wine country with what looked on the website like moderate hills. Except that I hadn’t counted on all the snow and ice. Italy had experienced extensive snowfalls in January, far more than usual, and while I had noticed tiny smatterings of snow along the highest points of the trails on the race videos from previous years, this year the snow was plentiful at lower elevations as well. In the early stages it was the ice that really had me alarmed; coupled with steep descents the trail was downright scary.

I was almost frozen with fear on several sharp turns and at one point I grabbed another runner’s arm. I also clutched at bushes, which left me with a souvenir I found the following day: lots of needle-like splinters in my fingers, even though I wore gloves.

And then I worked out a solution. I had watched a runner skid, unintentionally I believe, down a slope on his bum after falling over. That was the answer – slide down the steeper slopes on my backside, which should be easy if they were covered with ice. Why else had I been practising my skiing?

I used the technique several times during the race and it worked well for me. I didn’t care if I looked like a lunatic, and I actually heard another runner complimenting my idea. My only fear was that I would rip my pants while sliding, and that this would leave me possibly under dressed and, more importantly, cold. But I just made my clothes dirty from the places where trail mud had got mixed in with the ice.

Fast forward to the following weekend and I was four hours south by train to run the 45 kilometre Ronda Ghibellina in Tuscany. No snow here. I felt confident as I stood on the start line.

But there was trail steepness, lots of it. Maybe the descents weren’t icy, but they seemed treacherous to me with their loose dirt and stones. It must be obvious by now that I am hopeless at running downhill unless the gradient is gentle and the path is wide. I’ve read about different techniques, like disengaging your brain, holding your arms out wide and so on, but fear is fear and I have it in spades.

About half the runners had trekking poles. I’ve never used them. I’d be too afraid of falling, pole in hand, and breaking my wrist. I also find them to be dangerous in runners’ hands; many times I have worried about being impaled on someone’s pole, and I wouldn’t like to threaten others in this way. (I’d just been skiing, remember? And when they say you should carry ski poles with the pointy end facing forwards – well, nobody does that. Believe me.)

There was no question of sliding the downhills this time. Clothes would rip, flesh would rip and pain would follow. Not to mention blood on the trail and public indecency. So I made a decision that went contrary to the usual rules of ultrarunning: I would run the uphills and walk the downhills. This meant a day long game of cat and mouse with a group of other runners, whom I would pass on the uphills only to be passed in return on the downhills.

It was a successful strategy, and as often happens, the trails were more difficult in the first hours of the race. Some of the later descents were gentle and wide, one especially lovely one was on grass through an olive grove.

The route of the race followed a horseshoe shape, climbing to the hilltops surrounding the small Tuscan town of Castiglion Fiorentino, running ridges where possible, and descending to small villages. It was a glorious day, still and blue, and it wasn’t hard to see why people love Tuscany. Today was the first day of ‘la merla’ the Italian word for the final three days of January when the weather is supposed to be the worst of the year. Not this year.

The landscape was a patchwork of vineyards, olive groves, forest. Almost every hill, and Tuscany has a lot of hills, had either a ruined fortress or a church on its summit. Villages with stone farmhouses and more churches punctuated the hillsides. As we passed through tracts of forest I could imagine the wild boar roaming free; these boar are on every restaurant menu but I hadn’t so far worked out where they came from.

The aid stations weren’t frequent but they were well stocked in the Italian way. Italians like to drink hot sweet tea on their trail runs. They eat a delicious type of cake filled with Nutella or jam, and sometimes there is salami and cheese on offer.

After I convinced myself not to stress about those horrible descents I started to enjoy myself. The ridge tops offered spectacular scenery and then running into the forest offered shade. Some of the hills were horrendously long. Especially the last hill. I could no longer run uphill by this time. I heard a runner in front of me ask a marshal where the next aid station was and he was told it was at the top of the hill so I held on hopefully. The marshal had made it sound like it was two minutes away. Hah! I was still half an hour away.

I was moving along slowly but I had nothing else programmed for the day. I was aiming to finish in around seven hours but that was only a guess based on looking at previous race results. There was about 7,500 feet of elevation gain and corresponding elevation loss so my best benchmark was Pikes Peak Marathon which had taken me just over seven and a half hours.

After about a year I got to the top of that final hill. I mean, I got to an aid station, and was dismayed for two reasons: it wasn’t yet the top and I still had almost six kilometres to go to the finish. There had been a checkpoint (and potential race cutoff) at 11 kilometres to go and I had successfully passed it a while ago. Eventually I did reach the top, and there then followed a wonderful treat, a long downhill. It was wide and fairly smooth and I could do what felt like flying down.

At the bottom we still had two kilometres on roads, snaking around the edge of the town. Tortuous, but I passed many people because I was still able to run while many were walking, and everyone was calling out ‘dai, dai’ (give, give) which is what Italians call out for encouragement. ‘Dai’ rhymes with sky so the advice doesn’t sound so good to an English speaker, although it could be what most runners feel like doing by now!

We got a beer at the finish in a souvenir mug. Wonderful, and a reminder that I had run all day through to the drinking hour. We also got a plate of real Tuscan food: pasta, roast pork, white beans, salamis. My finish time was 7 hours 21 minutes. Maybe not fast, but I had finished despite my fear.

Pretty cool RR! It sounds like you had an awesome adventure.