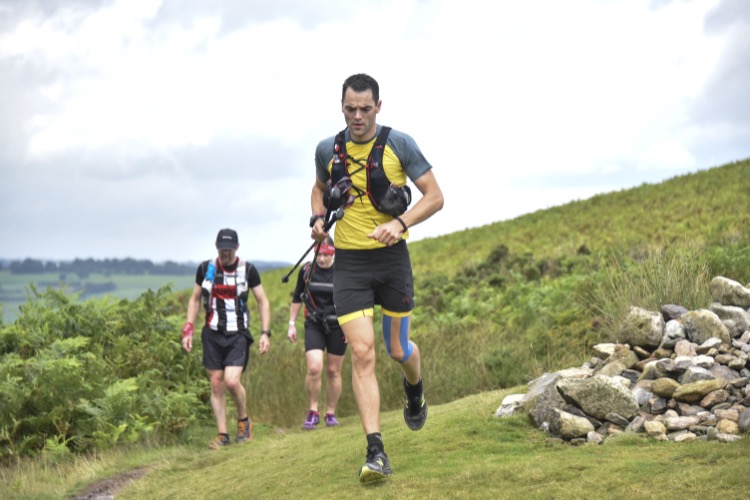 From day one, I was under no illusions – the Lakeland 50, held in the Lake District of Cumbria, England, is a tough race. My 16 weeks of training went well, aided by weekly power yoga classes and kettle bell workouts. I also took two trips up to the to the Lake District to train on the route and familiarise myself with the rocky terrain.
When I arrived for check-in on Friday afternoon, accompanied by my dad and wife, the scale of the event was immediately apparent. Hundreds of competitors and spectators gathered as baristas prepared coffees, and a local farm shop served hot food. I had my mandatory gear checked, stepped on the scales to be weighed, was given my timing chip, and handed race number 1018.

Early the next morning, I joined 723 other runners and their families under a packed tent, where the race director of 10 years gave an inspiring early morning speech, which concluded with the words “Nobody regrets finishing,” projected onto the back wall. As we gathered under the large starting arch, a light rain started to fall, waking up the senses. The forecast predicted the unsettled weather wouldn’t last long, and would make way for a bright afternoon. At 11:00 a.m. my journey began. 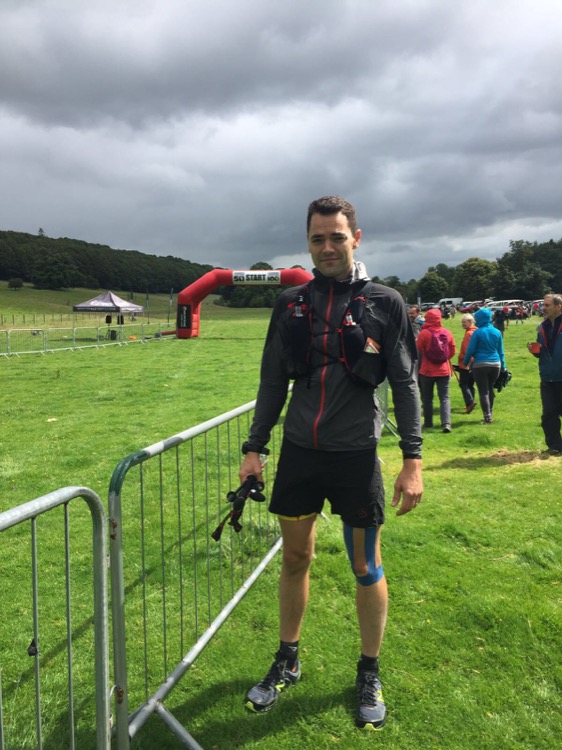 The first seven miles were undulating, but nothing too challenging. Having done a few ultras, I believed I was pacing myself well, felt strong, and was resolute in my belief that I was going to finish, and possibly even within my goal of under 11 hours and inside the top 100. Then mile eight happened.
I made my way up the first significant climb, just beyond Pooley Bridge, when I approached a group of a dozen cheering supporters gathered around a stream that crossed the rocky trail. As I approached the stream, I realised I was suddenly far too close to the runner in front of me, and in momentarily taking my eyes off my footing, suddenly felt myself slip on the slick surface. I heard my trekking poles hit the rocks, and I followed, with my left palm taking the impact. As I was being helped back to my feet, I looked over my shoulder to see that my left elbow had fully come out of its joint, which I can confirm looks as unpleasant as it sounds! I don’t know whether it was adrenaline or endorphins, but I don’t remember feeling any pain, just a dialed-in focus on fixing the problem.

I knew from picking my wife’s doctor brain previously, that a dislocated elbow should be reduced (put back in) as soon as possible, and so I asked the man who was helping me to my feet to grab my wrist. We pulled hard in opposite directions, but frustratingly to no avail. Nearby, a shocked woman covering her mouth screamed, “Oh my god!,” before running over to help. The three of us pulled as hard as we could, and after just a few seconds, they said “It’s back in!” I was in very little pain and feeling extremely grateful. I picked up my trekking poles with my right hand as the kind man asked “Do you need help to get to the hospital?” But I responded with “No, I’m good. Thanks for helping.” I headed off up the climb, knowing my wife and dad were only a couple of miles away, where I would be able to have a quick mid-race elbow consultation with them.
As I approached them, my first words were, “Now don’t freak out, but I dislocated my elbow a few miles back.” With the elbow only slightly swollen at this point, they didn’t seem to fully grasp how I’d managed to get it back into joint without an emergency room and a ton of drugs. I assured them that it had happened, but that it didn’t hurt and they didn’t need to worry. I also assured them that I would reassess the elbow at every aid station, which were every eight miles or so. Had they witnessed the scene at the stream crossing, they may have acted differently, but for the moment they trusted my decision, and I continued on. 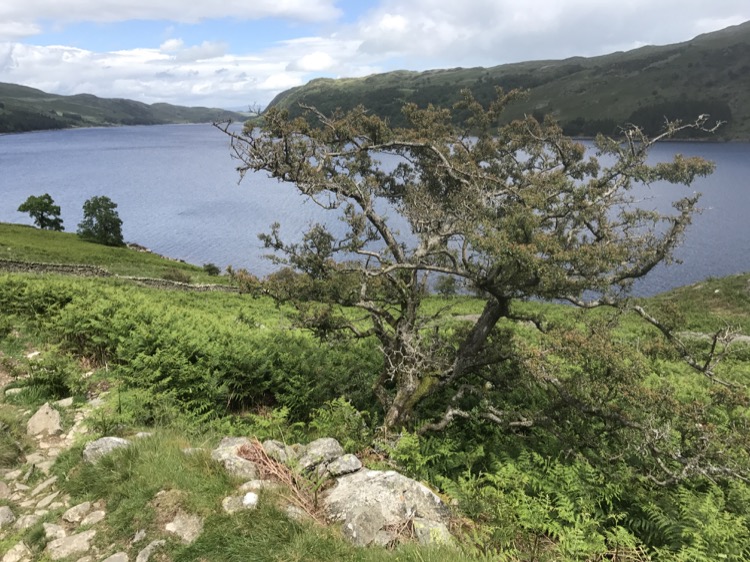 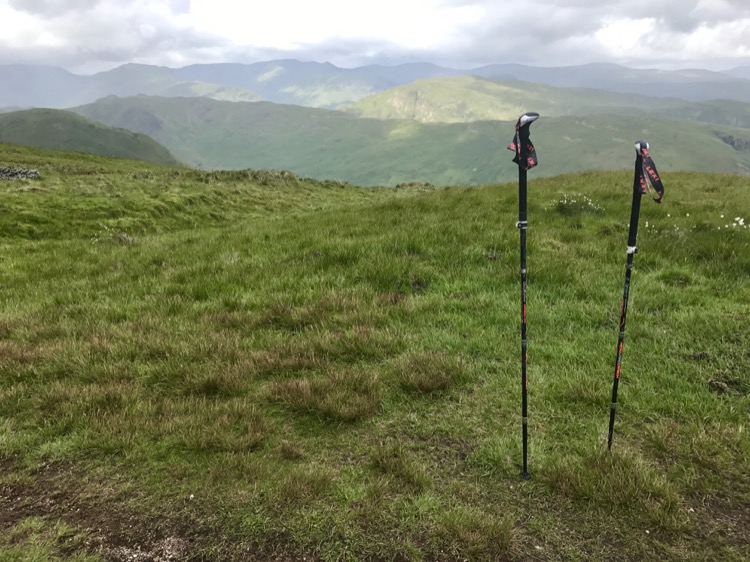 I’m not going to lie – the miles ahead were quite daunting. On a couple of occasions I had fleeting negative thoughts, but then I took stock: I felt stronger than ever, was moving better than ever, and who knows if I’ll ever get the chance to do this again. “What if I can do this?” I asked myself. “What if I can get this done under these circumstances? Am I tough enough?”
As luck would have it, a runner who was moving at a similar pace was a doctor and kindly ran through some quick tests with me, which erased the worry of nerve damage. I continued moving, trying to stay present, watching every footfall like a hawk, climbing hard, running flats fast, but descending as carefully as possible, trying not to blink.
After explaining the reason for my immobile limb to each aid station, they did what they do for everyone who comes through: they went out of their way to help fill my bottles and provide me with all of the food and nutrition I needed. Without their assistance, my finishing goal would’ve gone up in smoke the moment I fell, but thankfully because they chose to donate their time, my journey continued. 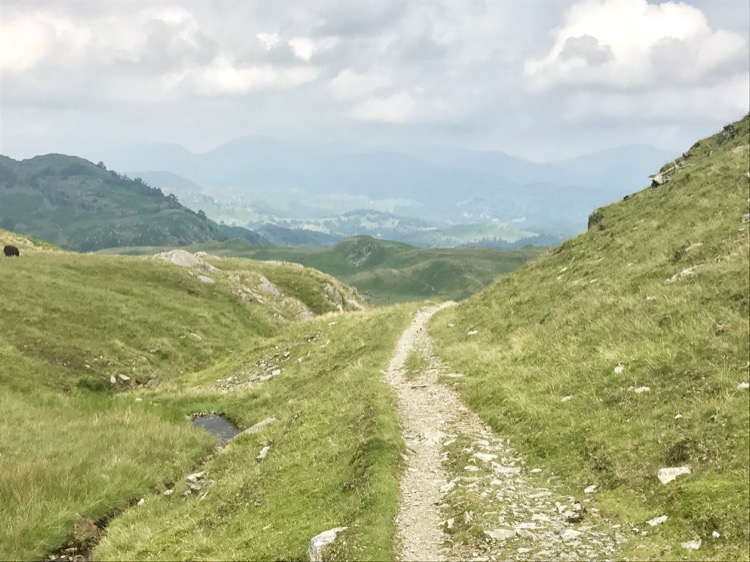 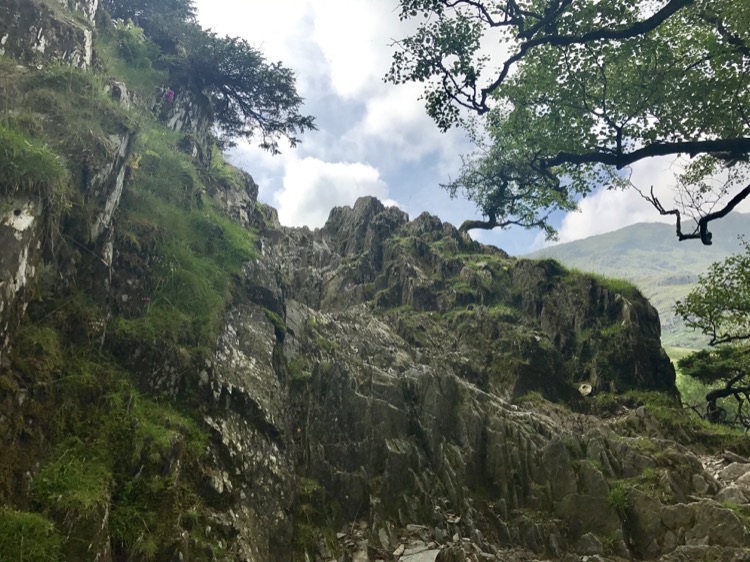 At times it was beyond tough. It took an immense amount of focus, grit and desire to keep moving. Negative thoughts occasionally reappeared: “What if it starts to hurt? What if I fall again?” But my positive mindset always responded sharply: “Focus 100%, protect the arm and it won’t get worse! You are on one hell of ride, and it’s far from over!”
I continued on, fatigued, quads cramping, arm by my side, but spirit intact. Mile 30… 35… 40…
Daylight was fading fast in the last five miles. I was now facing the prospect of getting my head-torch from the bottom of my race pack with one arm, but thankfully another runner provided two more arms to help retrieve it. After all I’d been through, there was no doubt in my mind I was going to get this done, but in a few miles I would be facing the final, treacherous, rocky descent into Coniston by torch light.
Breathing hard, I made the last, near vertical, rocky climb using all three working limbs. At the top, a flat section allowed for a mile of fast running before I slowed my pace considerably for the long descent littered with big rocks. After about 20 minutes of careful navigation, I was finally off the mountain and on a flat paved road, which I knew ultimately led to Coniston and the finish. I picked up my pace, and after a minute or two saw a man with a bright head torch ahead, clapping loudly. “How much further?” I shouted. I was dreading any response with a plural number, but my guess was two miles. He pointed straight ahead and said words that sent a shiver down my spine and put a lump in my throat. “Only half a mile left! You’ve done it!” My eyes widened, I took a deep breath and let my legs go.
In the distance I heard a chorus of loud voices and rattling cowbells. Goosebumps covered my arms and neck as I flew into the village. It was now pitch black, but ahead the streetlights illuminated large crowds of cheering people lining the streets. Amongst them I heard my wife’s voice loudly shout my name. She had been worried about the injury and was extremely relieved that I was by her side again, as we ran the last 100 metres together. I crossed the line with one arm raised above my head and one by my side, in a time of 10 hours and 47 minutes, finishing 85th of 724, filled with emotions and gratitude.
What a ride. 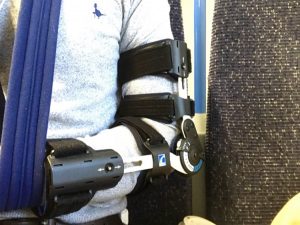 Update: The consultant at my local hospital’s fracture clinic believes putting it back in so quickly sped up the healing time. Five weeks after the injury, the arm was out of the protective brace, which was worn to allow the torn ligaments and broken bone to heal. Six months on, the arm is pretty much back to normal, and I’m soon to start training for my next 100 miler.
FacebookTwitterEmail

Wow, that is an amazing story!
Inspiring.

Awesome Gareth! What a spirit of determination. Very well done.

Sweet! I remember running that race back in 2010. It’s tough, although I recall it was more like 150 runners then. As an American, I realized how different the language can really be. As in the course directions: “Cross over the stile, then the beck, and take a left at the tarn.” Huh???

Glad you’re on the mend.

Haha! It’s not just Americans, Kenz! Most of us from the south of England are also unfamiliar with becks and tarns!