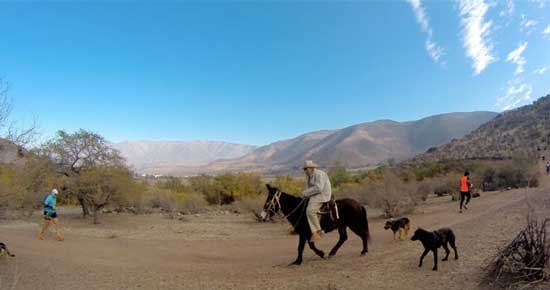 We were an hour outside of Putaendo, when the yerba maté* started to take effect. It was June and deep mid winter. All that afternoon we had driven north towards the sun, which now was on its low drawling descent into the Pacific Ocean. I took a final draw from the ornate bombilla, and passed it back to my running partner René. Santiago, Chile was a hundred miles behind us and we were rolling deep into desert country for the Putaendo 100K.

The maté was still kicking at midnight and we had had no sleep. On the backstreets of Putaendo, the South American runners come pressing forwards, stretching the starting tape, writhing to the techno music. I had raced previously on this continent, through long nights and thin air with these same runners. This time, however, I had come with my pen and camera – and as the tape dropped – I felt acclimatised, and ready to tell their story.

By 1:00 a.m. I am standing atop an adobe wall, surrounded by a constellation of prickly pears, looking for headlights. The runners had already pressed through tangled vineyard trails of carmenère and merlot grapes, and were now up on the frigid flanks of the Cordillera de los Andes. Deeper still in the darkness above them, was 22,841ft Aconcagua. And then, high on a mountain ridge, a star breaks rank. It comes spinning down the arête towards the saddle, before cutting into the earth and finding rhythm as a headlamp.

Two lights land on the valley floor. I track around behind the front runners and their pace increases; the shadow of my camera pole breaking their private conversations with the night. Through bushes of thorny espino and jagged rocks they dart to escape, like fitful partridges startling up from desert brush. Three more runners come through, but then the headlamps began to bend away, and no more come my way. The race is split; the five front runners mistaken and out of contention. René comes through the bottom of the valley – cool and concentrated – in steady eighth place.

Luis Valle now takes the lead. He’s a local miner, 23, and the father of two young daughters. His head-torch can be seen from the 46 km checkpoint, some 3,000ft above us, – the mountain radio crackling his name.

The miner pads down through the still night, and into the checkpoint. He smiles, silently eating from a bag of pomegranate seeds – guarding his concentration. Rene comes out of the darkness in third, composed and calm. The rest of the runners filter through like cool rain.

I pick up René at dawn to pace the last 30 km home – immediately climbing a broken scar, some 2,000ft out of the valley. He doesn’t want to speak: awash with that euphoric pain of directed intent.

We traverse above vineyards, along an abandoned canal, where guayacán grow, and humming birds flirt among the foliage. A woman emerges from a corrugated homestead. Music and barbecue smoke mingle along the water’s edge. A pastel coloured heat washes across the valley. The shadowed wing of a lone carnancho carves across our path.

I catch René grimacing as we press over rhythm breaking rises in the terrain. I move ahead and turn on him – but he won’t be caught on camera. Such feelings are perhaps better left out here.

Spectators fill the avenue into town, and leaves whirl from golden oaks like elaborate streamers. René crosses the line in third. Luis finished forty minutes before – one arm embracing his pacer, the other cradling his youngest daughter.

Slouched against a wall, our caps are pulled low against the afternoon sun. I am drinking a beer with René, watching the last fist pumping competitors arrive. I look back at the hurried shots I took as he crossed the line. There’s none of that show. Just a tired runner. Solemn looking. Honest.

I pass the camera to René – the daylight fading now, as he peers into the viewfinder.

After a few seconds he puts the empty bottle down, smiles in recognition – and then looks away distantly across the vineyards, to the mountains he is still coming down from.

*Yerba maté (mah-t) is related to the holly family. It’s a legal stimulant used widely in South America. The plant is steeped in hot water and drunk from a hollow, dry gourd with a special straw.

Matt Maynard has a life-long love of adventurous sport and travel. He has climbed rock faces around the world, cycled his bicycle across South America and finished 8th last year in UK 50mile championship. He is a classroom teacher who needed to escape outdoors, and is happiest when helping others to pursue the same passion. Originally from the UK, he is based in the foothills of the Andes near Santiago, Chile. He is working on opening new trails at the moment, which inludes a new VK route from his front door and has recently launched his trail running guiding service called greenbeantrails.