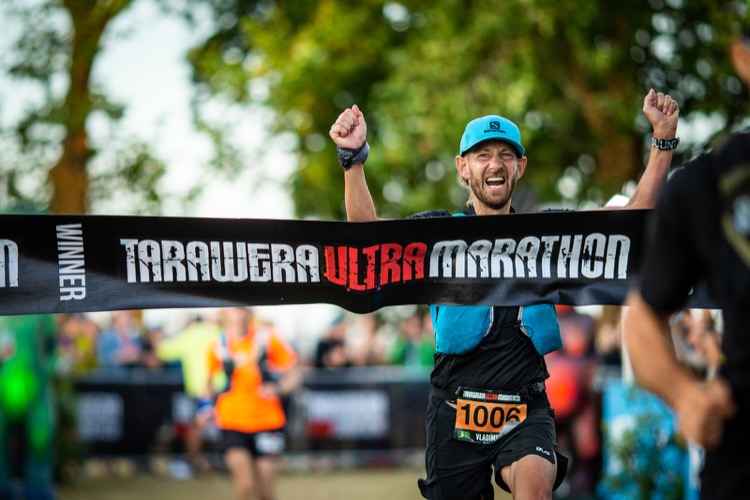 Vlad Shatrov taking out the win just moments before he ran back down and up the finish chute high fiving everyone who came to celebrate his finish with him. Photo: Tim Bardsley-Smith

An Eruption of Talent and More at Tarawera

Held mid-February, the Tarawera Ultramarathon on New Zealand’s north island has always attracted a high level of international competition, and there are three clear reasons why top level racers travel this far early in the year.

First: the timing. Whatever distance they’re racing, Tarawera is viewed as an ideal lead-in to Western States. The race offers a similar mix of challenges – a long day out on the trails featuring limited technical elements sandwiched between very runnable fast sections – but without the altitude or extreme heat.

Secondly, event founder Paul Charteris and current race director Tim Day have built a reputation for competitive 102k fields. While the race isn’t as stacked as something like The North Face Endurance Challenge, the front ends are predictably deep in a manner that pushes runners to credible performances.

Third and more importantly: the experience. This year’s events drew over 3,000 competitors who were supported by 150 staff and 650 race volunteers. According to Charteris, the event has grown 50% since last year and has potential to include 5,000 runners. Across the four distances Tarawera offers – 22k, 50k, 102k and 100 miles (165k) – visitors experience more than just Kiwi hospitality.

The traditional welcome or Powhiri ceremony gives arrivals their first taste of local culture before dropbags have even been handed in. Zach Bitter was nominated as this year’s “chief” to receive the welcome, based on his recent, exceptional 100-mile world record. 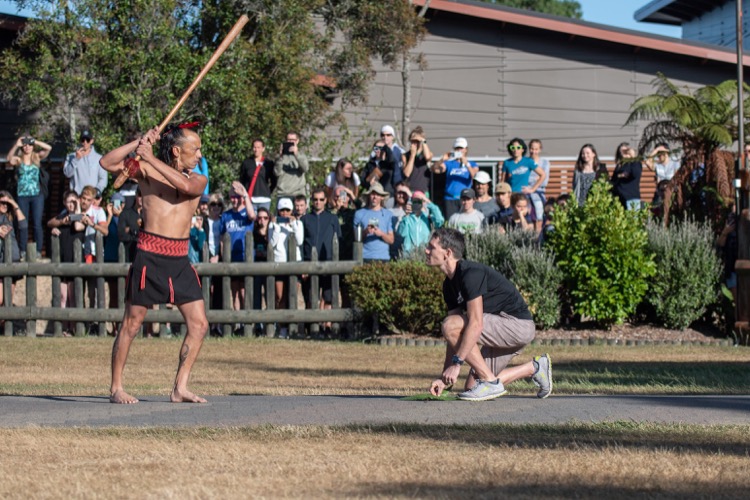 Zach Bitter accepting the welcome as the running tribes Chief in the Powhiri. Photo: Tim Bardsley-Smith

Spectating the start of the 100-miler, with its traditional Mãori haka (war/welcome dance) held next to a steaming array of volcanic geysers and hot springs before dawn, the sense of FOMO was overwhelming.

After the spectacular 100-mile start, runners roll past more volcanic geysers, catch sunrise over Lake Tarawera and run past the village of Te Wairoa, which was buried by a volcanic eruption in 1886. They soon catch a short boat ride to open fields, disembarking around the 30-mile marker where the course is fast and flat.

Bigger things were about to happen though. Cat Bradley (USA), the pre-race favorite, came in to Rerewhakaaitu aid station (34 mi) (fun fact – the ‘wh’ in a lot of place names in New Zealand is pronounced like an “F,” and “whaka” is a real word) out of the top five and way behind women’s leader Ailsa MacDonald (CAN).

MacDonald felt she was running conservatively but was well within the overall top 10 and leading the women’s field by 33 minutes from Caroline Seibert (FRA) who herself was surprised to be in second place.

Bradley’s gait was visibly impaired – a mix of recent long haul travel, a misstep in training, and residual ancient injuries restricting range of motion and causing visible discomfort. Her crew worked to put her back together and she received a huge cheer as she left the checkpoint – as much for a cheeky kiss with her partner as for her obvious grit.

With runners beginning to surge or fade around her, Bradley kept her head down, her headphones in and zombie-stomped the 5-mile road section to the next relief. Reluctantly, she made the only sensible call and pulled the plug with 60 miles to go.

Due to recent sustained dry spells and high temperatures, spectators were not able to enter the forested 25-mile section that would take runners through to around 65 miles. By this point, Shatrov had barely slowed down. The other big news was that Ailsa MacDonald was now in a ding-dong battle with Adam Kimble (US) for outright podium.

MacDonald blew through the 75-mile mark at Okataina taking less than 2 minutes for fuel and fluid, heading out with a 7-minute gap to Kimble, now fourth overall. Both runners, interestingly, exuded positive and happy attitudes for most of the day. There is definitely something to be said for running with a smile. 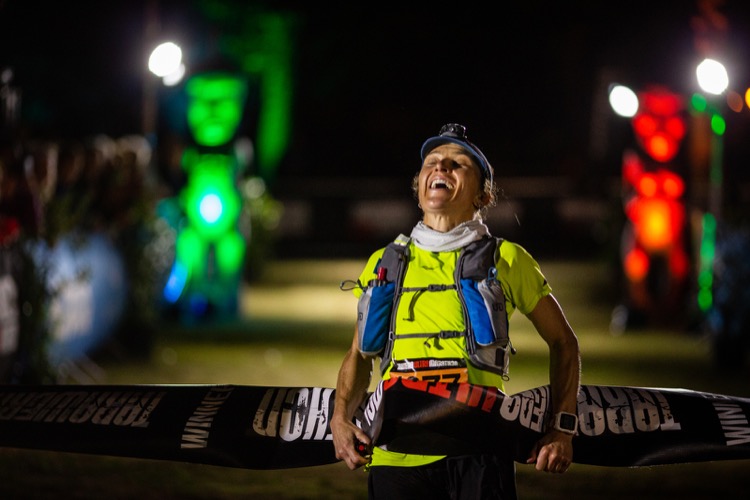 Ailsa MacDonald with the look of joy that can only come from knowing you can stop running now. Photo: Tim Bardsley-Smith 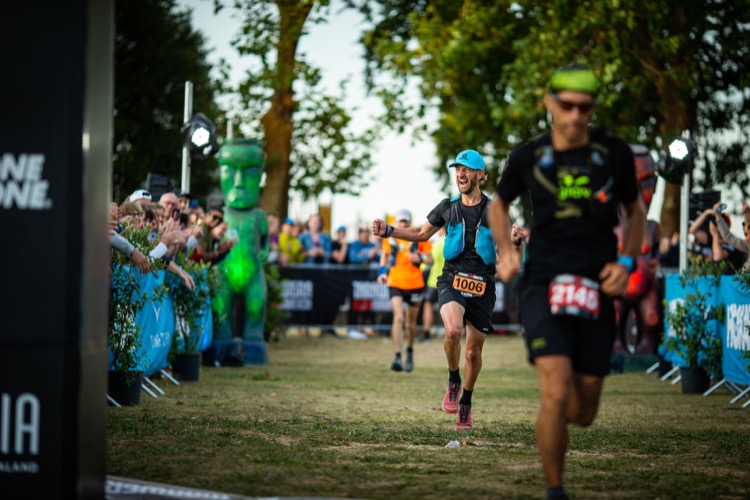 Just before sunset, Shatrov crossed the finish line by the waterfront in Rotorua. Completing his first 100-miler in 15:53 for the win and taking 25 minutes off of Bronco Billy’s CR from last year will create some incredible opportunities for this Australian to race abroad, but also set high expectations for whatever he does next.

Ishikawa crossed the line just under an hour later in a stoic 16:48, with night fallen by the time Canada’s Ailsa MacDonald crossed for overall third place in 18:10 just ahead of third male, Adam Kimble (18:23).

Edged out by Caroline Sebert (FRA) for second place in 22:14, local runner Sue Crowley (NZL) finished strongly in 22:28 to round out the podium in third place.

Away from the front end of the pack, runners still on course before dawn witnessed a meteorite blazing across the sky as it entered the atmosphere and lit up the hills surrounding them. Tarawera has the stuff that memorable miles are made of.