UltrAspire is a pioneer in waist-mounted lighting systems, which are becoming more ubiquitous during 100-mile and multi-day events. Their impact can be fairly significant, allowing runners to maintain a pace throughout the night that isn’t a massive drop off from daylight hours (assuming the rest of the race is well managed, of course). We were familiar with the original UltrAspire Lumen 800* from previous testing, and this summer we tested the new model on early morning runs, late night fastpacking and backpacking adventures, as well as during a 100-miler in the Sierra Nevada.

Consistent with the original version, the Lumen 800 Ultra 2.0 features an 800-, 500- and 200-lumen offering as well as a blinking option. The overall look of the lamp is similar, but a handful of key changes have been made. The most obvious change is that the dual bulb system on the original has been replaced with a single, high-power, wide angle bulb on the 2.0. The overall brightness and light distribution remain the same, and operation of the single bulb is relatively simple through a button with various press or press-and-hold options. Surrounding the lens, heat dispersing fins have been added – this was an especially welcome feature, as the original Lumen 800 did tend to run warm with extended use. With version 2.0, we didn’t notice any heat coming off the lamp, even after wearing it through the night. 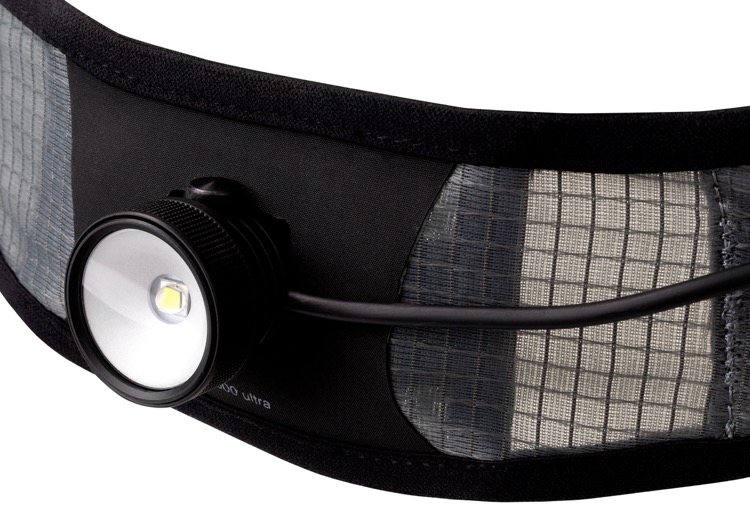 The Lumen 800 Ultra 2.0 runs off of two rechargeable UltrAspire 18650 batteries (included) and are housed in aircraft grade aluminum housing on the rear of the waist. This is a significant change to the original multi-sport version which only housed one battery. The result is an increase in spec weight from 5.3 to 9.8oz, but almost doubles the overall burn time. This tradeoff is one we were willing to make to ensure adequate light through an entire night. The light rides comfortably on a conical comfort mesh waistband with a limited stretch elastic belt and “fatigue free” buckle that fastens and unclips easily. We found this useful during late night runs and hikes. Size adjustment of the lamp is best done in advance, as on-the-fly adjustments are a bit tricky, but once we got it set up the way we liked, very little adjustment was needed, even after hours of use.

A main feature of the 800 Ultra is its ability to run the lamp off of a power bank should the batteries die, or you prefer to store the weight in your pack. In the 2.0 version, these wired entry points have been reinforced for durability and an extension cord comes with the purchase of the lamp, allowing the wearer to stash the battery pack or power bank in a vest, backpack or pocket while running. UltrAspire also sells the 18650 batteries separately ($13 each) if you want to keep an extra set of charged batteries in your drop bag.

From a performance standpoint, we’ve been impressed with the Lumen 800 Ultra 2.0 in our testing. Even on the medium setting, the bright lumen output and wide angle lens illuminates the trail clearly with minimal bouncing due to its secure fit. The wide field helps alleviate the tunnel vision that comes with wearing a traditional headlamp, and the 3D lighting technology creates shadows behind objects and provides a depth to your surroundings that is especially helpful when you’re completely fatigued at the end of a long night. Eye fatigue is further diminished by a SteadyBeam burn mechanism which ensures that the lamp does not dim over time until the battery is very low. Waist-mounted systems are becoming a mainstay of our nighttime running, and the Lumen 800 Ultra 2.0 will be a regular fixture in our standard gear setup.

The Lumen 800 Ultra 2.0 from UltrAspire is now available at www.ultraspire.com.

High Drama at the High Lonesome 100