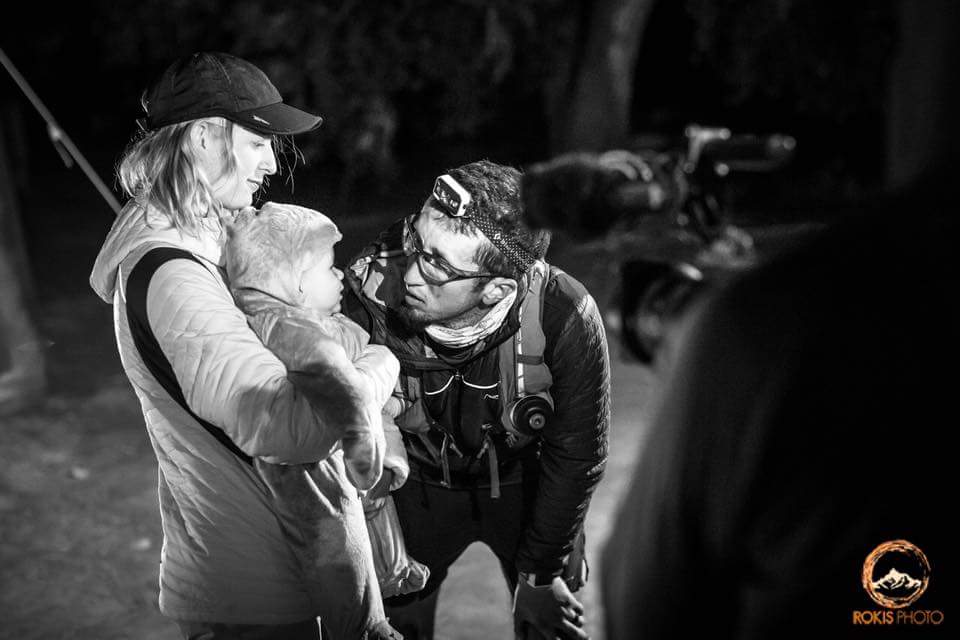 Mike talks with his wife, Sarah while their son, Kilian looks on. PC: Rokis Photo

Extreme personalities come with the territory in ultrarunning. Many run 100-milers like they’re road marathons, happily jumping from one to the next in a matter of weeks. While the Grand Slam award recognizes ultrarunners who finish three of the four oldest 100-mile trail runs in the U.S. annually in addition to Western States 100, the Triple Crown of 200’s is awarded to the fastest runner who completes the three original non-repetitive 200-mile trail running courses in the U.S. in under three months. This year’s winner, Mike McKnight, went and elevated the definition of extreme ultrarunning without giving in to the pain he’s worked so hard to push through.

In 2012, Mike was told by his doctor he’d be lucky to run a year after breaking his back. Three weeks after surgery he proved him wrong. Three weeks after that, he raced a 10K. Pushing through pain is what Mike does, and he does it well. During the Bigfoot 200, his first attempt at the distance, he ran the first 100 miles with severe stomach issues. His inability to take in calories created painful stomach cramps, and Mike struggled knowing he had another 100 miles to go. Luckily, at nightfall his body surrendered and allowed him to take in some calories. This proved to be the boost he needed to get through the second half of the course and finish in 69 hours, 18 minutes and 20 seconds in 7th place. Mike said that after his finish, he swore off racing for an entire year. And then a week later, he committed to running two more and decided to chase the Triple Crown.

Discovering what he had likely done wrong at Bigfoot was a major factor in his decision to keep racing this daunting distance. He said, “I started to wonder how I would do at the 200 distance if I wasn’t sick for half of it. I decided I wanted to give Tahoe a try, and since I was doing Tahoe, I might as well do all three.” While Mike’s stomach issues didn’t resurface at Tahoe and he was able to eat throughout, his body was still recovering from Bigfoot just a month prior. Knee swelling flared and the pain wouldn’t let up. At approximately mile 115, after intense massage and a couple hours of rest, Mike decided to resign his GPS tracker and quit the race. Once that decision had been made, he says, “I got an overwhelming sense of sadness. So I told my wife to hang on for a minute and then walked over to the aid station. I was very surprised when the aid station captain said I could continue.  I knew it was probably stupid, but I wanted to try at least one more aid station.  So I popped some Ibuprofen, threw on my gear, kissed my wife and headed out.” Mike continued on, his knee pain eventually subsiding with a little help from Ibuprofen and crossed the finish line in 67:19:20 in 4th place. Two down, one to go.

With only one month to recover until Moab, Mike took time to focus on self-care by swimming, rolling, spinning and sitting in compression boots each week. Post race stomach issues persisted, but Mike otherwise felt like his body was finally ready for his 3rd 200-miler. Except this one was 240 miles. While slow, Mike started off without any major setbacks. Nutrition, pain and pace were all under control, and Mike started to think about winning the Triple Crown. The other runner competing for the title was too close for comfort, “It was getting close to the point where I needed to start making a move on him.  We were at mile 115, so the race was just beginning.”

Over the next 85 miles Mike braved 6-degree temps and course sabotage, and managed to gain a comfortable lead on his competition. And then at mile 206, a shooting pain in his shin knocked him into a hallucinating crawl. With just a little over 50K left in this 240-mile race, Mike was so close he could feel it. He pushed through the pain and finished Moab 240 in 68:26:38, becoming winner of the Triple Crown of 200’s. “My mind dulled the pain and made it manageable. I’m serious when I say that humans can do anything they set their minds to.”

Looking ahead to the future, Mike says, “I for sure want to do another 200-miler in two years, because I’d like to see how I can do with fresh legs.  Particularly the Moab 240.  It’s a fast running course, and I’d like to see how close I could get to Courtney Dauwalter’s 55 hours.” Until then, Mike has healed and finished yet another ultra at Brazos Bend 100, placing 10th overall. And since it’s his nature to push past the pain, he’s hoping to go even more extreme and battle Barkley this year.

Mike McKnight is very inspiring. Keep raising the bar, Mike, it helps even an old coot like me. I’m 75 years young, farming 1600 acres, been living with a implanted cardiac defibrillator for 13 years, the quack that put it in told me I could never run again so I fired him and found a heart Dr. that told me to keep on running. Finished my 32nd marathon last August, might as well plan on another 32.