Based in Sweden, Silva manufactures durable equipment to help its users in both occupational and recreational outdoor settings. Designed with runners, skiers and cyclists in mind, Silva introduced the updated Trail Speed 4XT headlamp this season, and our testers found it both easy to use and effective.

Running up to 1200 lumens at max mode, the Silva Trail Speed 4XT headlamp is one of the brightest on the market. Besides brightness, our testers really liked the simplicity and intuitiveness of the Trail Speed 4XT, which has just one button that allows the wearer to adjust easily between three different brightness settings. The light defaults to turning on in max mode—and then switches to medium mode (~600 lumens) with one press and low mode (~80 lumens) with two presses of the button—users simply hold the power button down to turn the light on or off. While the battery has 5 hours of burn time in max mode, this is dependent on temperature and may be as little as 2 hours when used in winter weather. In dim mode, it burns at 80 lumens for up to 20 hours, regardless of temperature. A status button on the battery allows you to see the current level and adjust brightness accordingly based on how long you will be in the dark. When only 10% of the battery remains, the headlamp notifies you by blinking and then automatically switches to reserve mode, providing you with at least 30 more minutes of light. Charging time for the battery is about 4 hours. 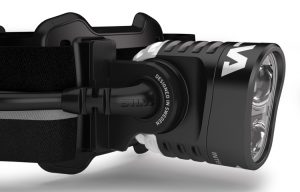 A unique part of Silva’s technology is the Intelligent Light, which is made up of dual light beams: a close flood light for viewing the ground just ahead and a longer reach spotlight to see farther ahead. This combination of a more dim and dispersed light beam just in front of you and a concentrated light beam allows you to avoid rocks and roots underfoot, while maintaining good visual awareness of several feet down the trail at high speeds so you aren’t startled by an animal or another nighttime runner. The angle of light can be adjusted within about a 90-degree range: from pointing straight ahead to pointing straight down or any angle in between. Angling the Silva flow light straight ahead causes the long reach spotlight to become more pronounced, while aiming it downward dims the long reach beam and makes the flow light brighter. One tester found this handy for reading a map, as the light naturally adjusts when pointing it downward. One drawback is that the angle of the light does have to be manually adjusted for this technology to work and the light doesn’t just adjust on its own.

The headband of the Trail Speed 4XT has an anti-slip strip along the inside, ensuring it will stay in place. Ergonomic adjustment straps allow the user to easily adjust the fit of the headlamp while it is being worn. Included is an optional band to attach over the top of the head to minimize movement. A curved backplate holds the battery in place at the back of the head. At 5.5 oz, the battery is relatively compact and lightweight for the power it packs, but one tester reported it was too heavy.

The headlamp also runs quite hot, especially when burning in max mode, so we opted to wear it over a sweatband or hat for a buffer. For runners with smaller heads or those who prefer less bulk on the headlamp itself, the backplate can be removed and the battery can be attached to the power cord for carrying in a backpack or at the waist. Included with the headlamp are attachments for the light to be used on a helmet or bike handlebars if desired.

MSRP for the Silva Trail Speed 4XT headlamp is $235, but it is not distributed in the US through the website. It is available on Amazon for a significant discount ($186 as of this publication). 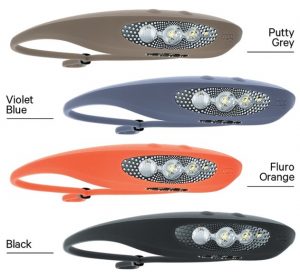 Australia-based Knog has made its name in bicycle lights and has released its third silicone headlamp, known as the Bilby. Possibly influenced by futuristic designs, the Bilby certainly makes a statement. It has a light pod at the forehead which is encased in an easily adjustable silicone band to wear around the head. Though we were skeptical of this novel design, we found the headband with its toggle adjustment to be lightweight, easy to measure, adequately snug, and surprisingly, very comfortable. Another pro to the silicone band is that it doesn’t retain odor and can be easily washed. The light pod is removable from the headband and can be charged by simply plugging it directly into a USB port rather than requiring a charging cable. The light pod can charge from 0 to 100% in 4 hours and is Knog’s most powerful headlamp to date with a max output of 400 lumens.

The Bilby offers six different light modes, as well as a boost mode for a maximum burst of light for up to 10 minutes. Two buttons on top are used for adjusting mode and brightness—the button on the right acts as the power and mode changer, while the button on the left serves as a dimmer. Both buttons can be pressed and held down simultaneously to lock the light, which is great to ensure it doesn’t get accidentally turned on in your pack. One major drawback to the design of the Knog Bilby headlamp is that the light angle is fixed and cannot be easily adjusted up or down.* The three different white light modes illuminate from close to far away, but the light is always projected straight ahead, except for reading mode when the long light at the bottom of the light pod is illuminated so you can see straight down. This may be problematic for more technical stretches of trail, so we opted to use the Knog Bilby headlamp for walks or runs on the street or less technical trails at night, despite its large lumen output.

*Editor’s note: Upon further review, our gear testers determined that while the angle of the light projection can be shifted by holding the right button (shifts light down) or the left button (shifts light up), the combination of the dimmer light settings doesn’t project as brightly when pointed towards the ground as it does when projected straight ahead. Therefore, it’s recommended for use on roads or non-technical trails.

The Knog Bilby launched with a successful Kickstarter campaign this winter, and is available for pre-order for $60 on Kickstarter. 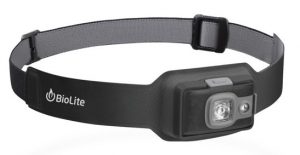 BioLite comes to the outdoor gear field from humanitarian roots, as their mission serves to meet the needs of families living in impoverished countries. They have developed affordable and efficient means of cooking, lighting and storing energy, and have distributed these products across India and Africa. Last year they introduced their first headlamp and this season, they developed a lighter version called the Headlamp 200. At 1.75 oz, it takes the cake for being ultralightweight, and has a maximum output of 200 lumens. It has four lighting modes that cover the basics: white spot, red flood, white strobe and red strobe. The use of a single button makes the headlamp intuitive and easy to control, but the button is pretty tiny and a little difficult to push when your hands are cold. Pressing the button once turns the light on and subsequent presses switch between modes.

One drawback to such a lightweight headlamp is the burn time at max output is only 3 hours. In contrast, the burn time at low is an impressive 40 hours if you can get away with less light. The Headlamp 200 can also be locked for when it is packed away to avoid draining the battery.

The BioLite HeadLamp 200 utilizes moisture-wicking smart fabric to minimize forehead sweat and maximize comfort, and ergonomic adjustment buckles allow quick adjustment for a proper fit. An articulating front bezel lets you angle the light to where you need it depending on your activity.

This headlamp will remain in our rotation for shorter training runs in less technical areas, or for sitting around a fire during weekend camping trips. It’s also a great emergency lamp to carry in your pack during a 100-miler in case you don’t reach your primary lamp before nightfall.

The BioLite HeadLamp 200 retails for MSRP $45 and is available now at https://www.bioliteenergy.com

thanks for reviewing these new headlamps.

I must confess to being part of the Knog R&D Team, so please consider my comments with that in mind. You reported in your review that “ the light angle of the bilby is fixed and cannot be easily adjusted up or down” I’m very glad to inform you, you must have missed our best feature! The most impressive feature of the Bilby is it’s ability to lower the beam angle electronically – when you hold down Left button – and raise the beam angle – when you hold down the right button!! This is possible – because each of the three LED optics are angled at 5, 12 and 24deg from the horizon. Rest assured – the bilby will light the trail near your feet – all the way up to the trail on the horizon.