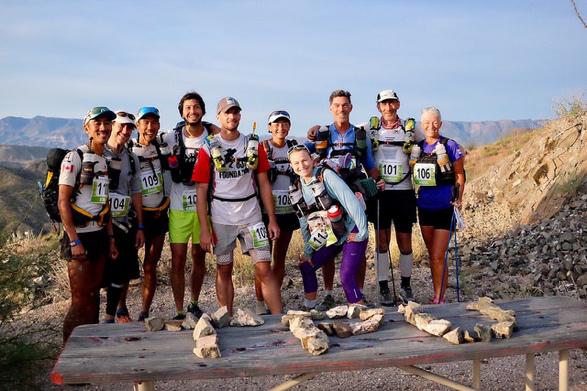 The Wild in Our Souls: Trans-Pecos Ultra

There is a wildness in trail runners, yearning for expression. It pulls us into mystery as we pursue the uncivilized world, some semblance of the earth before we changed it…and of our own pure, inner state. It’s why we run trails instead of roads.

And one giant step beyond trail races are multi-day stage races, which are just emerging in the US, though they are numerous overseas. One of the few is the Trans-Pecos Ultra, “the ultimate Big Bend adventure,” a seven-day, six-stage self-supported stage race in the remote Big Bend region of west Texas.

The Trans-Pecos Ultra just completed its second year, with ten finishers out of the 13 who set out. The race consists of a series of four daily marathons, concluding with a 58-mile ultra and then a 10k fun run, for a total of 170 miles (272 km). With generous cut-off times, TPU can reasonably be hiked, which several participants did.

Self-supported races adhere to a strict ethic of independence. Runners carry everything they need for the week except water, which is provided by the race organization at checkpoints and nightly camps. It becomes critical for runners to plan their fueling and sleeping needs carefully to minimize the weight on their backs and yet not come up short of calories or recovery aids.

The TPU race organization provides a camp each evening, with water and accommodation in ten-person canvas teepee tents. Although there are e-loos (outhouses) available at each camp, there is no provision for showering since water is scarce in the high desert environment. At the end of each running stage, participants prepare their own dinners and bedding while recovering for the next day. An outstanding feature of camp is the close, enduring relationships that grow among the runners and with the volunteers, forming a desert tribe by the end of the expedition.

The nightly camp was a place of camaraderie and strategic planning. Photo: Cameron Cozac

This is all a big step away from the ordinary ultra, which is a rather brief foray into wildness, with the promise of comfort at the end. Why would anyone choose the more rugged experience of a self-supported stage race?

Think of someone talking in a movie theatre. When you go to see a movie, you slip out of your own life and into a different world, leaving behind the ordinary. But if someone talks in the middle of the movie, it yanks you right back to the mundane.

A self-supported stage race is like a long, epic movie without interruption. Miles on the desert trail move you dramatically out of the ordinary, and the simple camaraderie of the shared campsite at night doesn’t yank you back. The next day on the trail, you just go deeper and farther in. It’s an experience few people have, or even want, but to those with a wildness in their souls, it’s a grace. Not a cheap grace, though.

TPU is a physically and emotionally demanding event in the high country of the vast Chihuahuan Desert. There are canyons, buttes and escarpments; thorns, flies and cactus. This year, as a record-breaking heat wave settled over most of the country in late October, afternoon temperatures on Big Bend Ranch rose into the 90s.

Big Bend Ranch, dubbed “The Other Side of Nowhere,” lies just northwest of Big Bend National Park. At 310,000 acres, it’s the largest of the Texas state parks. There are 238 miles of multi-use trails, and its grand size and remoteness nearly guarantee solitude. With no sizeable cities for hundreds of miles, it’s one of the premiere stargazing locations in the world. The Milky Way stretches visibly overhead, a celestial sight most of us haven’t seen since childhood, if ever.

The stars at night are as numerous as dust. Photo: Aaron Bates

The opportunity to experience this wilderness is intended for runners and hikers of all paces. The daily marathon distances have a 12-hour cutoff and the 58-mile stage allows a comfortable 34 hours for completion.

In 2016, a variety of runners and hikers signed on for the adventure of a lifetime. One of the hikers foraged for trail food, gathering prickly pear fruit and wild herbs. Some used trekking poles. One hearty runner with the autoimmune disorder myasthenia gravis completed the week in fine form. A former Marine signed on as a way of supporting Marine vets returning from combat. Two brothers from Canada made this race their sixth self-supported multi-day stage race in a world-record attempt of eight deserts in a year. There was a broad range of ultra experience represented; one runner had never even completed a marathon before.

Some chose to hike the TPU. Photo: Sheryl Collmer

Out of this user-friendly, low-pressure matrix emerged a titanic competition for the win. By the end of Stage 3, three runners (the Marine, Thomas Karlick and the two Canadian brothers, Eric and Paul Chan) were neck and neck, within a minute of each others’ cumulative time for 77 miles.

The following day, during Stage 4, Eric fell and impaled his hand on a cactus, requiring medical attention at the next checkpoint. Although the wound was not serious, Eric was shaken enough to fall back, and brother Paul remained with him. Karlick clocked in 25 minutes ahead.

Entering Stage 5, the Chans needed to pass Karlick and make up his lead. Eric Chan did make the pass, but then had no gauge of the interval between himself and Karlick behind him. He simply had to run his heart out and hope it was enough.

As darkness fell, a magnificent effort ensued, on a rugged trail studded with rocks. Eric Chan heated up to a 7:00 pace, unimaginable on that terrain, and hit the finish line first. He anxiously awaited those behind him, noting each minute passing.

After 20 minutes, a bobbing headlamp appeared in the distance downtrail. It was a breathless wait, but Karlick, coming in hard, made it to the finish within the margin he had set up the previous day. Karlick held the overall lead by a mere four minutes.

TPU was never envisioned to be a competitive race; there is no prize money and it’s not a stepping stone in a championship series. It was only the stoutheartedness of two men willing to give their very best, that turned TPU 2016 into a heroic display of spirit.

The volunteers had a great time, too. Photo: Aaron Bates

The demands of the desert taxed all the participants to their deep reserves. They reported that the course required more of them than they’d expected. Way more. The desert of Big Bend is notable for that, for asking a question as big as Texas: what’s inside of you, and is it wild enough?

Sheryl Collmer writes and runs in Plano, Texas and dreams of the high desert. She has volunteered and crewed at several desert races, including #TPU2016.