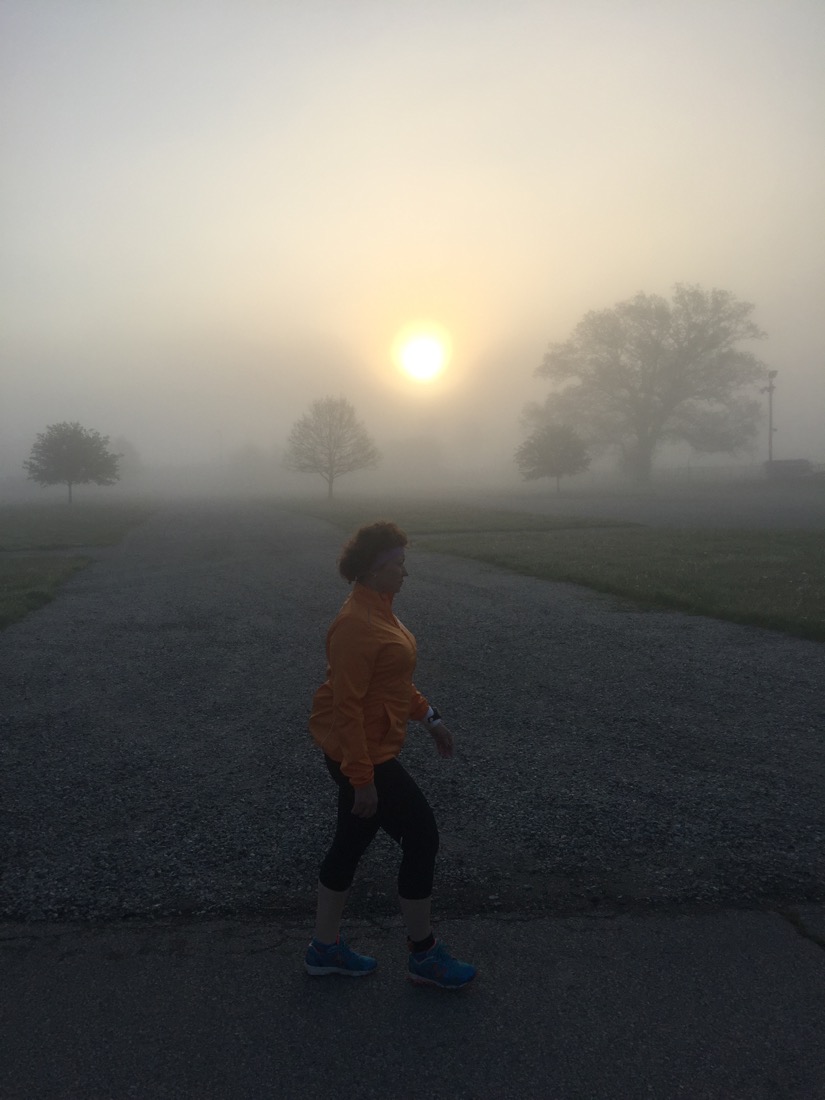 Sandra Cecere Viens working through the fog on the way to completing 102 miles over three days. Photo: Rick McNulty

The Time of My Life: 3 Days at the Fair

“Super Dave, do you want to run together?” asked Pablo, my longtime friend, at 3 Days at the Fair, a 72-hour race. Sitting in a chair with a mouth full of mac and cheese, I nodded. Together, we walked along the out-and-back section of the course when Pablo proclaimed, “200 miles. We’re gonna do it. Nothing crazy, we just need to run 15-minute miles.” I confirmed his excitement: “We don’t have to run fast, we just have to run consistent.”

It had been a brutal 60 hours leading up to this moment, but we made a promise to stick together and push each other until we reached the 200-mile mark. Slow and steady, we jogged around the course, taking regular walk breaks.

Fifteen minutes later, we crossed the timing mat. I reached down to hit the lap button on my watch; however, my watch wasn’t there. At the beginning of the race, I decided to do something I’ve never done before: I decided to run without a watch.

In years past, I felt bogged down and pressured by the numbers on my watch. My arm felt like I was carrying a metal shackle. The numbers drove me crazy. They kept me up when I tried to sleep. They forced me to do math with a foggy mind.

I felt a calming freedom in not knowing. I felt comfortable and relaxed just running how I felt. I took breaks based on how my body was feeling, not hitting a certain mile mark. Even though I wasn’t running as hard as in years past, I took fewer rest breaks and spent more time on the course. I was running for the love of running. I was having fun.

There’s a certain freedom that comes when you realize you’re not going to hit your goal. If time’s not on your side, there’s nothing you can do but your best. There is no pressure if you’re not going to make it. However, the opposite is true when you have all the time in the world. It’s easy to talk yourself into taking extended breaks. There are also no excuses to not hit your mark. No excuses meant I had to go to work. And with 35 miles left, I was going to have to work for 12 hours.

I had logged about 25 miles with Pablo so far. Never in any race could I remember running that much with any one person. Pablo had been amazing. His positive attitude, sense of humor, knack for storytelling and outgoing personality helped the miles fly by.

Pablo and I ticked off the miles like chipping away at a glacier with an ice pick. Slow, steady and consistent we ran. We eventually picked up our friend Jim, who had spent more time on the course than anyone. When Jim saw Pablo and I, he picked up his pace and ran with us.

The miles were melting away and I felt stronger running as a team than I ever could by myself. We hit the start/finish and Pablo looked determined. I knew I was holding him back, so I let him run ahead. Pablo grabbed his headphones and was soon lost to the darkness. He would hammer out miles through the rest of the night and finish strong with 217.

The night air was cold, but the cold was a blessing. It forced us to keep moving, or else we’d freeze. So we kept moving. Music from a neighboring Relay for Life blared in the distance, which gave us more hope than you could imagine. We ran. We talked. We exchanged words of encouragement to everyone on the course. We ate noodles and drank soda. All the while, we kept moving forward.

The Relay for Life soon ended and it felt like the lights going out on the Titanic. With two hours of darkness to go before sunrise, we were devastated. For as much as I wanted to rest, to close my eyes, to lay down for just a minute, I knew if I stopped, Jim would stop, and we would not reach our goals. I think Jim knew that as well. I felt beholden to Jim, just as he felt to me. Over the miles, we had become a team, and we weren’t going to stop, not until we both reached 200.

Our persistence paid off, because Jim finally reached the 200-mile mark. To my delight, he hung with me and said he was going to keep running until I reached 200. Bless your heart, Jim. I had only five miles to go when we picked up a good friend, Sean, who was stuck on mile 190. For as much as I resented Jim for being five miles ahead of me, I could only imagine how Sean felt being five miles behind me.

Jim, Sean and I continued around the course, knocking out 15-minute miles like clockwork.  Sean was struggling, but found our run/walk pattern to be sustainable. Just as Jim wouldn’t leave me, I told Sean we weren’t going to leave him. Together we knocked out the next five miles until I reached 200.

Having learned our pattern, Sean was rejuvenated and motivated to reach the end. Looking strong, he picked up his pace and continued on his way. I so much wanted to hang with him but I was absolutely spent. One thing I regret is not having enough in the tank to go the extra five miles with Sean, just as Jim did for me. But that didn’t matter, because Jim and I were able to get Sean closer to his goal, and with a second wind, he was going to get there.

I notched my 200th mile with an hour to spare so I took my time and walked. I smiled, joked with friends who I consider my 3 Days family. I thought about the other times I reached 200 miles, and I realized how hitting that mark is not a given. Just because you accomplish something in the past doesn’t mean you’re guaranteed to do it in the future.

This race wasn’t a PR for me but it was an ER… Effort Record. I’m more proud of this year’s 3 Days than any other because I worked harder to get these 200 miles than in years past. When it comes to the third night of a 72-hour race, I’ve traditionally shrunk. When push came to shove, weariness had won and I was reduced to rubble. This was the first time in my six attempts of the 72-hour race I ran through the darkness and reached the dawn triumphant.

By not obsessing about the numbers, I enjoyed the miles rather than suffering through them. By running with others, I was able to share my accomplishments rather than keeping them to myself.  By getting out of my own head and being present, I realized how lucky and blessed I am to compete in a race such as 3 Days at the Fair. And by doing something as simple as taking off my wrist watch, I was able to have the time of my life.