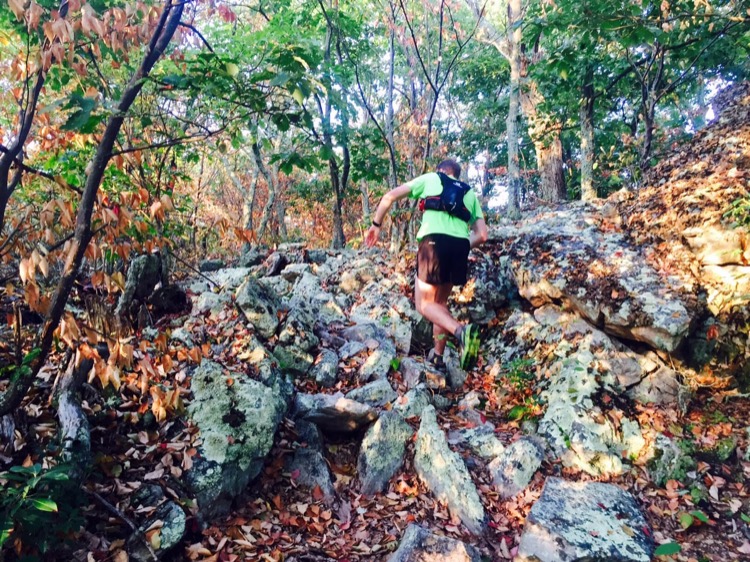 Erik Price scrambling up one of the many rock piles.

The Ring happens every Labor Day weekend in rural Virginia. Few have heard of it and just 157 unique members have completed the brutal ultra-race, now in its thirteenth year. Entry is free. There is no corporate sponsorship, no prizes, and no mercy from the 71-mile course traversing the Massanutten Mountains. Runners circle up, pay their entry fee in the form of aid station supplies and make last-minute preparations before a prompt 7:00 a.m. start. There are seven aid stations along the way. Runners are allowed one sturdy drop bag that is transported to five of the aid stations. The forecast was warm and humid, to be expected for this time of year.

Eager but cautious of the trek ahead, I started out slowly on the crowded trail. Coming up the first climb, the group spaced out, making way for light conversation. I chatted with a nice fellow from Ohio. He had DNFed The Ring previously and was trying to get ahead and just hang on after the halfway mark. I suggested a more conservative strategy. Even the early sections are a serious test, both in terms of pacing and hydration management. There are just two aid stations in the opening 25 miles, the first with only water.

Navigating The Ring sounds straightforward but it is anything but. “Stay on Orange” is all you need to know, however, many of the blazes are faded, making it difficult at times to differentiate from nearby red or yellow trails, and do not always adhere to the typical double markings for turns. Extra exploration at intersections was required several times to stay on target.

Dominated by sandstone and supported by shale, these mountains began to form almost 500 million year ago as layered rock and sentiment were squished into folds by moving continents. These synclines wrinkled into anticlines that push rock skyward, forming the long ridges of the Massanuttens. Further erosion led to rock screes and knife edged outcroppings for runners to contend with.

The toughest challenge of the day came after the 50 kilometer mark with an ascent covering nearly 1,000 feet in just three-quarters of a mile. Maintaining some semblance of pace was near impossible. Shirt completely saturated with sweat, I ran out of fluids halfway up. I knew a major aid station was coming with water and food so I just tried to keep a clear head. I arrived in timely fashion before continuing on to one the rockiest sections. Moss-covered rock gardens prohibited consistent running and took a toll on my toenails. At times, all I could do was look at the trail and ask myself what in the world am I doing here. Though footing was poor, my spirits were high; as the sun sank below the mountains, the temperature dropped and I was treated to a gorgeous sunset off to the west.

Through the next two aid stations I ate some real food, changed socks, and chugged a Starbucks double shot. Passing mile 60 in the cooler night air, my legs felt strong for the first time in hours. Running fast for a change fueled my adrenaline rush. The final stretch traverses a rock garden, before finally, like an oasis in a pitch black forest, the finish line. A race official recorded my time at 2:33 a.m. A volunteer handed me warm food. There were a couple of finisher handouts to be had: an oval sticker, denoting the length of the Ring in miles, and a pin proclaiming, “I peed on the electric fence.”

The Ring is odd, “miserable” in a word, but ultramasochists keep coming back for it. Finishing The Ring is the only way to be eligible to run The Reverse Ring, the same trail run counterclockwise in February. Will I run the Reverse and gain membership in the “Fellowship of the Ring?” You bet. But not until I forget about the standard edition.

Hey Erik – congratulations on your run and nice writeup! I’ve never been on the Massanutten but it’s on my short list of trails to check out. Thought you might be interested in a new trail challenge I put together that includes this trail, along with 4 other iconic SE trail runs, as part of a “slam”….https://blueridgeultratrail.wordpress.com/