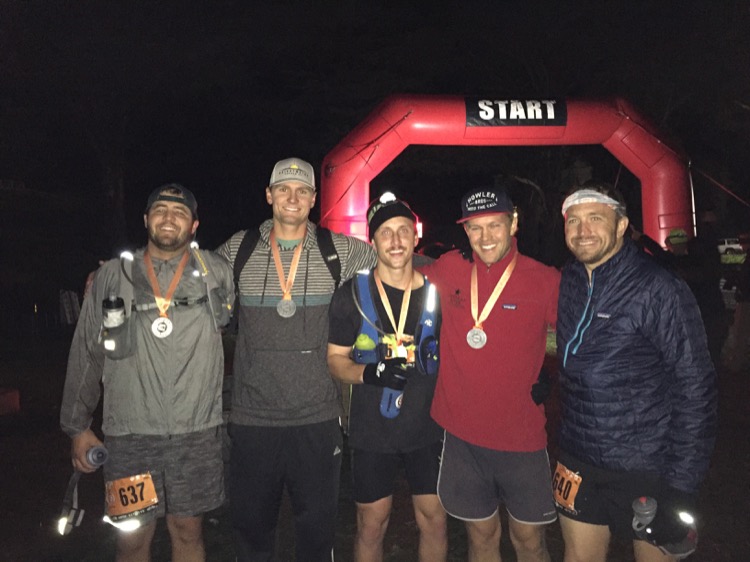 It’s 4:00 a.m. The coffee is hot. The boys are ready to rock. We’re zig-zagging our way through empty streets comprised of those holding on to whatever bit of euphoria remains from a night on the town. The euphoria we’re seeking is miles away. Miles away.

For some of us, Hudson (Huddy), Dave and Rob (Slooter), The North Face Endurance Challenge California 50 mile marks their first exploration into the ultramarathon world. For Matt, Josh (Hickey) and myself, this is another opportunity for progression at the 50-mile distance. Hickey is like our sensei. Hickey – our good vibe guru – carries with him invaluable experience, constant encouragement, and a relentless smile. Our drivers – my brothers Brit and Nick – embraced the selfless duties of making sure that we were ready to rock come 5 a.m. They squared away logistics between start and finish and were stoked to do so.

Amidst the starting area were bright colors, excited spirits and propane heaters. Oh yeah, porta potties too! We all bee-lined towards a mandatory bathroom stop with ten minutes until start time. Runners were lining up near the start. The music was pumping. It’s go time!

On the first climb, there was boundless energy and chatter while everybody tried to find a groove. During our first ascent, I was talking to this dude named Jonas and he told me to look back. What I saw was absolutely incredible: a stream of speckled light (headlamps) down below. Way cool.

From that point onward, I just remember desperately wanting that California sun to share its beautiful rays with us. When the sun finally did rise, it was extraordinary. The birthing light emanated from behind the mountain silhouettes and, to compound the stoke, the Golden Gate Bridge was visible. To top it off, I could hear the waves crashing into the rocks. Are you kidding me? That was a polysensory experience that I won’t forget anytime soon.

After turning around, we had some sweet decline entering Stinson Beach (mile 29.4). I was dogging it pretty badly and needed a quick fix to snap out of it. At the time I thought “salt should do the trick.” Well, they didn’t have salt tabs. What to do next? I saw a bowl filled with salt and went for it. I threw a handful in my mouth and washed it down with Mountain Dew. That was a first. It wasn’t until after the race that my squad informed me of the proper salt-intake procedure. Apparently, there were baby potatoes next to the salt. The idea is to grab a potato, roll it in the salt and then consume. This is a novel concept, and a far more appetizing one. I’ll be sure to remember that for next time.

After a while, I entered into one of the most spectacular parts of the race. It was through the John Muir Forest. With the tunes blasting, I weaved through pine-softened trail splitting between massive Redwoods. This was the rhythmic trance I had long been waiting for.

That all changed when I arrived at Muir Beach (mile 41). It was time to go full-grind mode. All of sudden I heard my name. It was my buddy Matt. l had made the assumption that he was already done. He said “No, no. I’m still in it.” I was stunned. This dude is high-caliber. He went out with the big dogs and it didn’t pan out. That happened with 30 miles to go. Rather than throwing in the towel, he decided to stay the course. I love it. It shouldn’t be viewed as a failure, but instead that idea of “going all in” needs to be celebrated. Matt could have played it safe, but he didn’t. He chose to let it rip. As I am writing about that moment, I’m getting fired up!

We power-hiked the next climb. And kept hiking. And kept hiking. Finally we arrived at the top and saw the next aid station below. When we rolled into it (Tennessee Valley – mile 43.8), I immediately heard voices. “Yeahhhhh boys!” It was my cousin Hayes, Erin, Lindsey and my Aunt Wimpie and Uncle Rob.

Then my brother Brit rolled up to us. “You guys good? I’m pacing you until the end.” We trudged forth together. I was dragging hard, but miles were slowly clicking off. It was the last bit of uphill and before I knew it we arrived at the final aid station (Alta, mile 46.7) with only three miles left! My initial goal was to finish this race in under 9 hours. Brit said, “screw that, let’s go sub-8:40!”

It was all downhill from there. We kept at it. We then passed some more family with less than a mile to go. It was my sisters – Willemina and Amber, and cousin Erica. At that point we knew the hay was in the barn.

As we approached the last turn, I could hear the music blasting and the noise of the cowbells. We trotted a little faster. People were screaming. That feeling of euphoria when nearing the end is hard to match. We crossed the finish in 8:39:51. I laughed. Sub-8:40 by 10 seconds; thank you bro!

Matt Morales (left) and Tyler, laughing as they cross the finish line, beating their 8:40 goal by seconds. Photo: The North Face

While being adorned with our finishers medals, I saw my parents. We exchanged high-fives and all kinds of positive conversation ensued. Now it was time for a much needed beverage!

We then waited for Slooter, Hickey, Huddy and Dave to finish. When they did, it was incredible! We saw Slooter hammer his finish. We yelled and gave hugs. It was awesome! He did it! He crushed it. I was so amped to see him finish.

Only ten minutes later, Hickey clicked his feet at the finish line. Despite a jacked-up lung and multiple warnings to not participate in the race, Hickey finished it. Not only that, but he did so with a beaming smile on his face.

After that, we hung around the beer garden and waited for Huddy and Dave to bring it home. As the sun set, we cozied up next to a fire. Every ten minutes, somebody would go check to see if they had checked in at the last aid station. We wanted to be there for them at the finish.

We remained huddled and all of a sudden “Hudson Hanlon coming through the finish!” blared on the loud speaker. Without hesitation, our table sprinted through the finishing gate. Hugs around the house – they freaking did it! Huddy and Dave stuck together for the majority of the day and gritted it out. It was deeply inspiring to see them stick with it and get it done.

After that spectacular moment, we loaded into our vehicles and headed back to “The City” for pizza and beer. It was a Saturday well spent!

Lessons Learned
It’s not about the time you get, rather the time you had. No matter if I met my goal, everything about December 3 was spectacular. It was an arduous day, but I loved it! These journeys always tend to cover the emotional spectrum. They strengthen the soul, harden the body and fortify the mind. Deep down, the suffering we experience strips us of comfort and we become the rawest version of ourselves. The ego no longer exists and humility is the only option. Following these intensely visceral moments, is a very powerful feeling. It’s hard to quantify in either a written or verbal manner. Really, it’s indescribable.