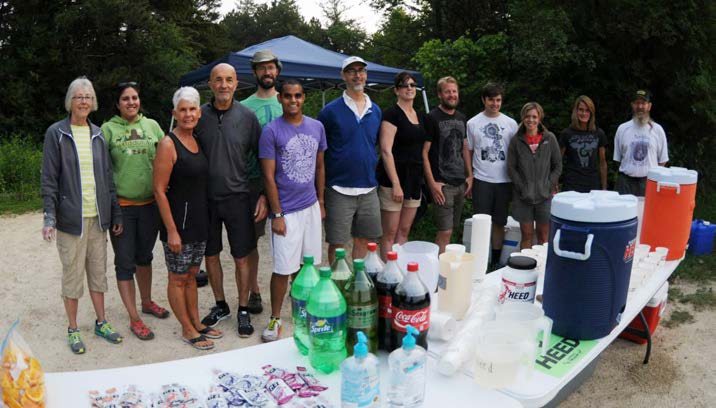 The Evolution of the Modern Aid Station

In the earliest days of ultra-distance races, food and water were essential, if not life-sustaining. For years, aid stations have been central to the ultrarunning experience.

But food and water aren’t the only nourishment on hand.

For the past two Western States 100 races, I’ve spent my mornings at the Devil’s Thumb aid station. Western States has been around for 42 years, and many of its volunteers, nearly as long. Minutes before the leaders arrive, aid station captain Dennis Zilaff delivers final instructions, as well as well-earned recognition to many of his colleagues who’ve been helping there for years, if not decades.

Zilaff himself is a semi-pro helper of 30-plus years. In 1983, having never run a trail, he caught wind that a friend of his was helping future legend Bruce LaBelle run 100 miles in one day. His friend asked Zilaff to help out, and he agreed.

That experience hooked him. He returned to Western States each year to crew, pace and volunteer. He liked running trails, too: he’s finished 70 ultras, including two Western States and every edition of Placer County’s spring classic, Way Too Cool—26 and counting. In 1998, he took over as captain of The Thumb and has been a fixture there ever since.

Like many of his era, he’s seen enormous changes in the sport, from race fields numbering 10 to 1,000, syrup bottles to hydration packs and cola to VESPA. But the more things change, the more they stay the same.

“The goal of aid stations has not changed in 32 years, and that is to make sure we keep track of the runners,” Zilaff notes. “Secondly, we want to supply the runners with nutrition and hydration in remote areas.”

While those central missions are the same, the role of the aid station has greatly evolved to meet athletes’ needs. Aspects that have changed include:

Expertise Early aid stations were manned sparsely, if at all. Zilaff notes that in the early ’80s, an aid station might be a table or patch of ground with the barest necessities, “so if you got to the station fast enough in the race you may get a cookie and water from an old plastic milk container.”

Today’s aid stations, especially at majors like Western States, are staffed by folks who are often veteran ultrarunners, have decades of experience and are as skilled as they come at meeting runners’ needs. And if they aren’t, Zilaff and other captains train them, dishing out lessons to rookie volunteers on nutrition, hydration and bits of psychology before the first runners arrive.

This year’s Devil’s Thumb had a buffet of options: sweet to savory, soft boiled potatoes to hard candy, pulled pork to pickles. And if something didn’t sit well, there was mint and ginger to calm runners’ stomachs.

Passion Today’s aid workers have expanded their role to truly enhance the race day experience. The biggest change is driven by the desire of race organizers to create what Zilaff calls “an exceptional experience” for runners, providing information, guidance, medical aid and even motivation at a runner’s darkest moments.

Excellent aid workers foresee and prevent problems, including “asking the runner about blisters or ‘hot spots,’ if they need anything for chafing (when a person is walking through an aid station they often forget until they start running again), asking them about food, their stomach, hydration, urination” and any other issues that may slip the mind of a fatigued runner.

Fourteen-time Western States champion Ann Trason, who DNF’d her first attempt in 1987 due to nausea, now helps others with the issue on race day. Of that day, she said, “Had I known that puking was a normal thing, it wouldn’t have scared me as much.” Today, she counsels the nauseous at Michigan Bluff aid station with calming words and crucial advice: rest, regroup, refuel gradually and resume. It’s soothing wisdom from a sage messenger that keeps a runner moving toward success. Indeed, after nearly three decades helping runners, and 17 years at the helm at Devil’s Thumb, Zilaff notes his most proud moments have little to do with water, calories and electrolytes:

“I have coached many people out of the aid station who wanted to drop, to have them hug me at the finish when I present them with their hard earned belt buckle. To me, that is the most rewarding aspect of being at an aid station. I know that I am personally responsible for many more belt buckles than the two I own.”

It should come as no surprise, then, that Zilaff and his crew were instrumental in guiding both Katie Trent, 22, and Gunhild Swanson, 70, in and out of Devil’s Thumb just before cutoff on race day. A half-day later, the pair became the youngest and oldest female finishers at Placer High. Among the beneficiaries of that aid were several hundred spectators on the track who basked in the joy of their triumphant finishes.