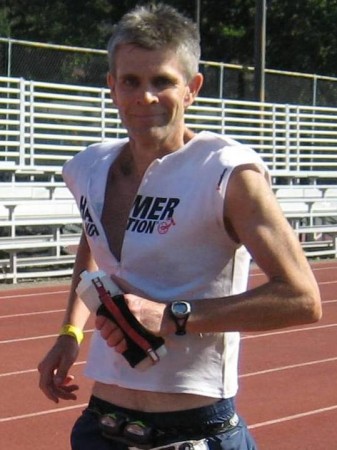 The Basics On Hyponatremia

Hyponatremia is defined as a blood sodium concentration below the normal range. Depending on the laboratory, that value is generally around 135 mmol/L. When hyponatremia occurs during or shortly after exercise, it is referred to as exercise-associated hyponatremia (EAH). Low blood sodium causes water to move into the cells following an osmotic gradient, which results in swelling of the cells. Most concerning is when this cellular swelling takes place in the lungs and brain. When water builds up in the lungs, shortness of breath develops. When the cellular swelling involves the brain, the condition can progress to headache, confusion, disorientation, seizures, coma and even death if left untreated.

We’ve found that EAH can be quite common in ultramarathons. In fact, from our studies at 100-mile ultramarathons in Northern California, we’ve seen the incidence range from 5 to 51%. Fortunately, as far as I am aware, there have been no deaths in ultramarathons related to EAH. However, EAH is recognized to have been responsible for the deaths of several athletes in other endurance events, including marathons.

For any discussion of the prevention and treatment of EAH, it’s important to have an understanding of the underlying cause of the condition. In the most basic sense, EAH must be due to fluid overload and/or inadequate sodium resources. It’s the cases where there is fluid overload that seem to be most likely to become symptomatic and potentially serious, and those cases typically involve a couple important hormones. One hormone, arginine vasopressin (AVP, also commonly referred to as antidiuretic hormone or ADH) causes the kidneys to reabsorb water. AVP is appropriately secreted when blood osmolality rises, but there are a number of other non-osmotic stimuli for secretion of this hormone, which include exercise, heat stress, muscle damage and nausea (all pretty common stimuli present during the typical ultramarathon). Another hormone, brain natriuretic peptide (BNP) causes sodium to be excreted by the kidneys. So, it’s through this combination of overhydration, water retention and urinary sodium excretion that one generally develops symptomatic EAH.

With this understanding of the underlying cause of symptomatic EAH, it should be evident that the best action one can take once they recognize that they are becoming overhydrated is to avoid worsening the situation with more fluid, i.e., stop drinking (!), and if necessary, take steps to suppress the AVP secretion by such things as slowing down, cooling off and addressing any nausea. Sodium intake, whether taken as a capsule or with food, will not necessarily improve the situation because the excess sodium could just be excreted by the kidneys. Under some circumstances, oral sodium may even stimulate thirst, thereby leading to even greater overhydration.

So, how do you avoid overhydration? First, it’s important to recognize that water is stored with glycogen (actually about three grams of water for each gram of glycogen). This means that when glycogen stores are utilized during exercise, a considerable amount of water gets released into the body. Assuming one starts an event with good glycogen stores and appropriate hydration levels, this built-in water store requires you to actually lose around 2-3% of your body weight by the time glycogen stores are depleted to maintain a proper hydration level. A greater weight loss would be expected if you are also dipping into fat stores for energy use. So, any increase in weight, or even a constant weight, during exercise is clear evidence of overhydration. But, even without weight scales, drinking to thirst is probably the most effective method of avoiding overhydration.

Many have presumed that a lack of adequate sodium resources within the body is an underlying cause of EAH. We now know that the body has sodium stores within soft tissue and bone that can get released and activated to maintain blood sodium levels during exercise. In fact, there is good evidence that, for periods of exercise up to around 12 hours (mostly from Ironman triathlon studies), sodium intake during the event is not necessary because these internal sodium stores can be adequately activated. Furthermore, the research has also indicated that if you lost at least 3% of your initial body weight, you would be very unlikely to develop EAH in events of that duration. However, we now have evidence from studies at 100-mile ultramarathons that EAH can develop with considerable (over 5%) weight loss. These cases suggest an underlying cause related to a sodium deficit, either from inadequate intake or a lack of activation of sodium stores. So, it may be that for events lasting longer than 12 hours in duration, some sodium supplementation may be necessary even with proper attention to avoiding overhydration.

Finally, a comment about non-steroidal anti- inflammatory drugs (NSAIDs) is warranted. NSAIDs cause constriction of the blood vessels leading to the kidneys. These drugs also potentiate the action of AVP on the kidney. Therefore, NSAIDs not only increase the risk for acute kidney injury, but also increase the risk for the development of EAH. It should be apparent that the use of NSAIDs during endurance events is risky business.

1 – Drink responsibly during long periods of exercise, avoiding dehydration as well as overhydration. Assuming good hydration and glycogen stores at the onset of exercise, shoot for a 2-3% weight loss during long endurance events, and more when fat stores are being used.

2 – Salt intake during exercise periods of 12 hours or less is probably unnecessary to avoid EAH, but it may be valuable during longer periods of exercise. In particular, if your weight is down at least 2-3%, some sodium intake is probably not a concern and may have some value in stimulating thirst. However, if your weight has increased or is stable, then sodium and fluid intake should be discontinued until fluid balance is corrected.

3 – Avoid the use of NSAIDs during exercise. These drugs increase the risk for EAH and acute renal failure.

4 – Listen to your body with regard to food and fluid intake during exercise and avoid any pre-planned hydration schedule that would promote overhydration.

For more scientific information on this and other ultrarunning topics, see the list of publications on the research page of the Western States Endurance Run website (www. wser.org/research).

Marty Hoffman serves as the Chief of Physical Medicine and Rehabilitation, Veterans Administration Northern California Healthcare System, and as the Research Director of the Western Sates Endurance Run.

Amen! Dr. Hoffman you nailed it. If I have one more fellow participant or person offer me a salt pill to fix whatever during a race, or aid station volunteer forcing me to drink, I think I’ll scream. Please continue to contribute to UltraRUNNING Magazine in the future.

EAH “with weight loss” isn’t something I’ve heard about before, and it seems this would be impossible by definition. Assuming the findings are correct, I wonder if symptoms, specifically from encephalopathy (EAHE), still occur. And would “salt treatment” by mouth or IV be beneficial? What is it about this cohort? Is it a matter of heterogeneity with some experiencing a form of DI under stress instead of SIADH?
Clearly, our bodies do amazing things to maintain sodium within a tight margin in circulation. There must be a mechanism beyond fluid and salt intake here. Sodium regulation is defective surely, but related to a need for sodium replacement, I doubt.

Having recently read Waterlogged, I am with you, and echo Todd’s enthusiasm. In a recent half marathon, we all passed a woman who was in distress by the side of the road, accompanied by a couple other runners who had stopped to help her. The cries from the field of runners of “Give her water!” really distressed me. How did any of us know how much fluid she had already consumed? We need to dispel the urban legends and re-educate people on proper (i.e., limited) hydration. Ignore the Gatorade ads, for starters.

Enjoyed the article. What about the other minerals in the various salt tabs and electrolyte drinks? Are we losing them to quickly during races or hyperdiluting them as well? Seems like there could still be need for those products until more research says no or am I just not ready to give up my salt tabs yet?