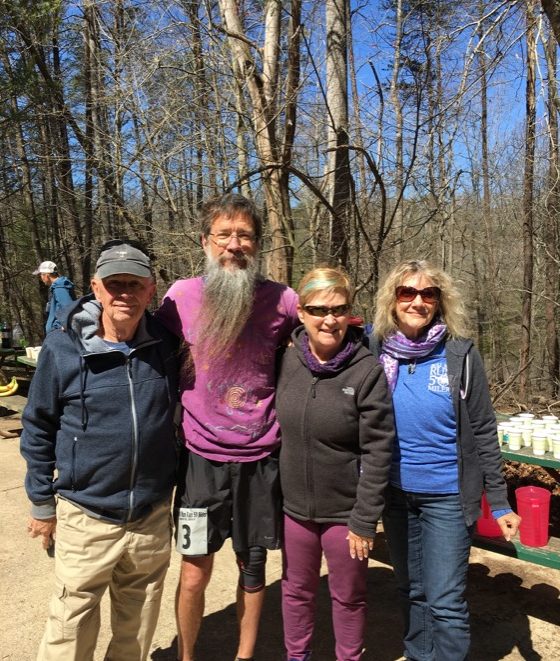 The 25th Running of the Bull Run Run 50-Miler

Remember 1993? Bill Clinton was sworn in as President of the United States. In the Super Bowl Dallas defeated Buffalo. Movies: Schindler’s List, The Piano, Philadelphia, Six Degrees of Separation. Album of the Year: Unplugged, Eric Clapton. And the first Bull Run Run 50-Miler was held on April 24.

In 1993, a small group of ultrarunners decided to put on a 50-mile trail run in Clifton, Virginia at Hemlock Regional Park. We met Warren Doyle, who ran the park for George Mason University. I remember checking out the course with Ed Demoney and others. We did a “fat ass” test run in the winter. That first year, 54 of 60 starters finished and the finishers included guys named Frank Probst and Tom Green. Did Tom and Frank ever think they would be coming back to this place for 25 years?

This year I showed up on Friday afternoon to help out. I got to see experienced volunteers who had marked the course while others were setting up the check-in cabin for runners. Co-race directors Anstr Davidson and Chris Scott were handling a variety of tasks that included getting supplies to aid station captains, setting up the start/finish line area, double-checking the parking situation, and more. They made the decision to use the “high water” course based on reports from the north end of the course that did not sound safe due to heavy rain the day before. A lot of intentional thought and decision-making goes into the BRR 50. Later in the afternoon, I headed home to get a good night’s sleep.

I arrived at Hemlock early Saturday morning in the dark. Joe Clapper greeted each car and directed them where to park. Many of the runners assembled in the dining hall for coffee and bagels. It was a great chance to see other runners and volunteers, and to stay warm.

Dave Janosko had formed “Team 21” and included me. I got to see my teammates, Frank Probst, Tom Green and Dave before we started. Frank had finished all 24 runs, Tom 23 and Dave 21. I had finished 22 of the 24 but this year I would not finish. I had a total hip replacement right after last year’s BRR. Then in January 2017 an MRI showed a tumor in my pancreas. I had major abdominal surgery (distal pancreatectomy and splenectomy) in late February and am still recovering.

The race started and the runners made a loop around the parking areas before heading onto the single-track trails. The first stream crossing was slow as runners unsuccessfully attempted to keep their feet dry. The trail was in good running shape as we headed north with lots of bluebells to enjoy. Although I had only walked in my training leading up to the race, I shuffled along chatting with other runners. I tried to keep up as I enjoyed just being on the trail. The sound of trees creaking, the beauty of a variety of wildflowers and the constant need to watch the trail made me smile.

I got to the first aid station at mile seven feeling good and I saw the regular volunteers who have served for many years. I started to think that I could go all 50 miles. One enjoyable thing about this course is with the out and back on the north end, you get to see all of the runners. I am always amazed at how every runner, even those in the lead, gives some words of encouragement or a greeting. I got to see Gary Knipling, Tom Green and others who have covered many miles on these peaceful trails over the past 25 years. Gary, Tom and other participants, like Ed Cacciapaglia, have been through a lot medically, and they inspired me to keep moving.

It became a beautiful day with sun and warmer temperatures. I got to shuffle along for a while with many-time finishers Bill Waddell and Mark Zimmerman before they dropped me. When I got back to Hemlock at about mile 14, I felt good but was only walking. The aid station volunteers were positive and encouraging. I headed back down the trail toward the Bull Run Marina. I had accepted that now I would only walk. I was the “last runner” now, but I loved every moment. When I got near the marina, Betty Sue and Dick, who were aid station captains back in 1993, met me. How great to have them back!

For 25 years my wife, Melanie, has met me on the course and at the finish. She met me at the marina, and later she wrote on Facebook about a photograph of the two of us, “At Bull Run Marina meeting my proud husband AKA “Runner Boy” who just finished 19 miles of the Bull Run Run 50-Miler! He asked me if he could keep running, and I said, not this time!” Don’t we always want to keep going? 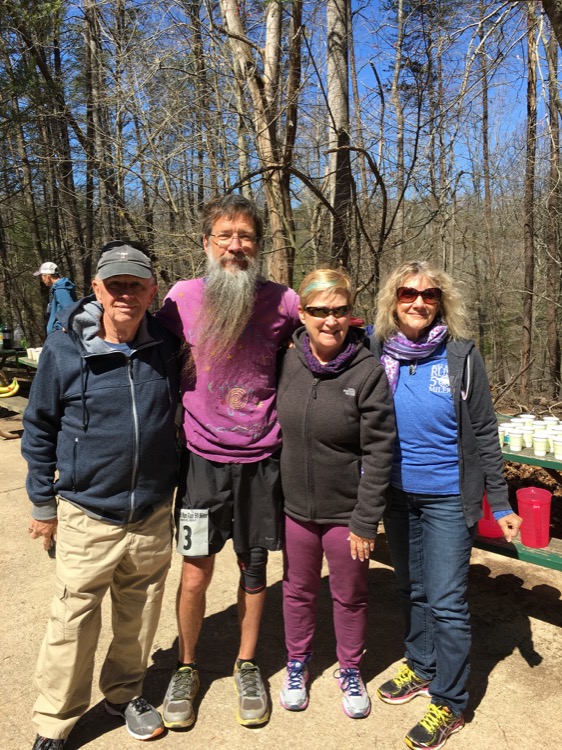 I hated to turn in my number but did, and we thanked the aid station volunteers. We headed to Fountainhead to see if we could find Frank Probst in pursuit of finishing all 25 BRR runs. We saw Frank and he looked great. He was on his way! We drove back to the finish line area to hang out and cheer on the early finishers.

Many thanks to the Virginia Happy Trails Running Club organizers and volunteers for another great race! Many of these people have given their help for multiple years, and some, like Brenda Davidson, has been here for all 25 years. THANK YOU!