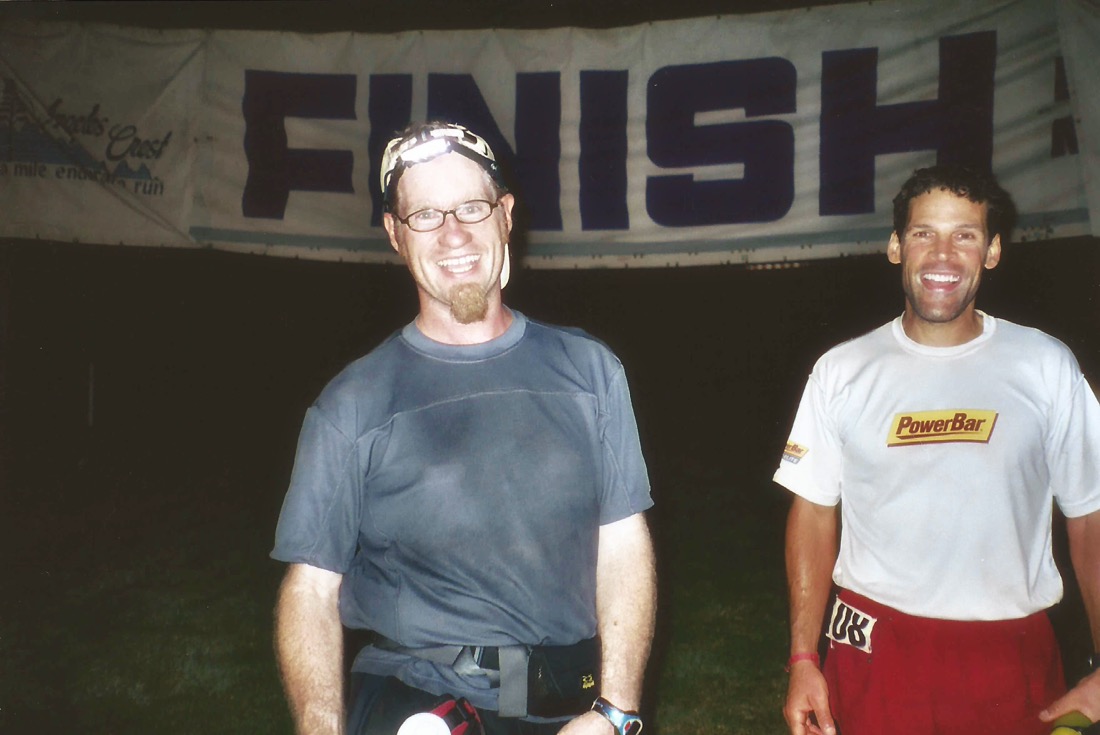 That’s Not a Light…

Man came out of darkness and into the light, and that was my experience during the 2003 Angeles Crest 100. Not a lot of planning went into the race. The prior couple weeks had been a hectic whirlwind of travel and there wasn’t much time to prepare in advance. I simply threw a bunch of my running stuff into a bag and caught a flight for Los Angeles, near the race start.

My extensive crew picked me up at the airport (i.e., dear ole Dad with his Volkswagen RV) and we headed to Wrightwood for the pre-race meeting. Since my dad would be crewing for me and meeting me at various aid stations along the way, I figured there was no need to use drop bags. We were a team. And he had a well-provisioned RV.

Now a bit about my dad. He is a good man, a really good man. Anyone who would sacrifice his weekend to follow someone who is progressing on foot through the rugged backcountry of the San Gabriel Mountains for 24 hours is worthy of Sainthood. My dad is a Saint. My dad has always unselfishly supported my endeavors.

My dad is terrific; though he can be, shall I say, a bit improvisational. This is a man, after all, that uses kitchen knives as screwdrivers. He plugs holes in life rafts with chewing gum. He uses a paperclip to attach his reading glasses when the screws come unfastened. The things this man can do with a roll of Duct tape and some fishing wire would amaze you. And don’t get me started on the utility of rubber bands.

The race went well during the early stages. There were some ups and downs, as there inevitably are during any ultra, but nothing too devastating. Morning turned to afternoon, and afternoon turned to evening. Darkness began to fall.

My dad had reliably met me at every possible juncture a crew could access. He makes up for his jankiness by being extremely dependable. If he tells you he’ll be somewhere at a certain time, he’ll be there five minutes early.

“Do you need anything?” he asked.

“Just my bag. I need to grab my flashlight.”

He handed me my bag and I took out the light. I’d decided to use just a handheld flashlight since my headlamp had fogged up during a previous race and I’d left it at home. Off I went with my flashlight.

It got dark that night. Really dark. And slowly, ever so slowly, but unquestionably, my light began to fade. Running in near darkness was unnerving. Not only was my progress slowed, there were noises. Loud noises. And bushes rustling. There is a healthy mountain lion population in the San Gabriel Mountains, and I was vulnerable prey.

Finally an aid station arrived and my dad was waiting.

“Is everything okay?” he asked. “It took you a long time to cover that distance.”

“My light was going out.”

“No problem,” he said, “I’ve got a backup.” He disappeared into the RV.

He reemerged a minute later, “Let me see your light,” he requested.

“HA!” he howled when he saw it, taking on the caricature of Crocodile Dundee, he wailed, “That’s not a light, this is a light!”

He held up one of those vintage Coleman camping lanterns, the kind Yellowstone Park Rangers used to carry around in the ’70s. It had a big plastic handle and a lens the size of a satellite dish. The casing was faded and deteriorating, and the rubber gasket around the lens cover looked disintegrated.

“Whaddya mean?” he rebuffed. “This thing is great. Look, it’s got this big handle to hold onto and a protective rubber button you push to turn it on.”

“Where did you get that thing?”

“We used to take it camping when you were a Boy Scout.”

“I loved those days.”

“You wore bellbottoms, had a mustache the length of Cuba and drove a lime-green Ford station wagon with wood paneling along the exterior. You should try your best to forget those days.”

“The light will work fine.”

“This is an ultramarathon, not a damn marshmallow roast around the campfire!”

“Dad, you’re reliable. That thing’s gonna self-destruct the instant I leave this aid station. How many batteries does it take anyway?”

“Watch here,” he flipped it on. The light coming out was dim and yellowy, barley illuminating the space two feet before it.

I shook my head.

“Just take it,” he said. “I’ll look for an alternative at the next aid station.”

“Okay,” and off I ran carrying an antique flashlight the size of a dust buster.

Predictably, it lasted for all of about ten minutes. Oh, perfect, I mumbled. Just perfect.

I lurched through the darkness and somehow made it to the next aid station. My dad was standing next to the RV talking to someone when I arrived. He looked like a runner and he was wearing a headlamp, so I asked if he wanted to pace me? Sure, he agreed.

Poor bastard, I thought. He has no idea what he’s getting himself into.

There was a small flurry of activity and commotion getting ready to depart and during that brief mêlée my dad informed me he’d found a replacement light. Great, I thought. Problem solved. One less thing to worry about. To be honest, my mind wasn’t working too clearly by this point.

Off we went. My pacer’s name was Ethan Veneklasen. He looked fit, which was good. No telling what would happen from here forward. The glow of the aid station faded behind. I took out the new light that my dad had given me and when I saw it, my legs momentarily buckled. It was one of those squeeze-activated LED keychain lights, the kind you see displayed near the checkout counter in convenience stores. He must have had it on his keychain and removed it for me. It was no bigger then a box of matches. He’d gone from one lighting extreme to the other. The man’s got range, I’ll give him that.

I would have to rely on the illumination of a keychain light for the next 18 miles of trail. That, or we’d have to catch a shitload of fireflies and somehow bind them together.

Thankfully, we managed to navigate through the dimness and make it to the finish line, he with a headlamp and me with a keychain light from 7-Eleven. Ethan was a surprisingly good sport about it; we had many hardy chuckles as we stumbled along the way.

Waiting at the finish was Dad. He looked proud, and pleased with his ingenuity. We all shared a moment of celebration.

I thanked Ethan for his companionship and extra illumination and bid him farewell. The plastic clip on my water bottle strap had broken during the final stretches of the race so I went to discard it before we left.

“What are you doing?” my father asked.