To be fair, there are some tough 100-milers out there. Yet, the Teanaway Country 100 stands toe-to-toe with those that are notoriously hard. Though blasphemous to some that I’d even suggest it, I think that in time, it will be viewed as a low altitude Hardrock. What?! How could I possibly suggest this itsy-bitsy little race on the east slope of the Cascades be mentioned in the same breath as the gem of the San Juans? I’m not only suggesting that it could be – I’m telling you that it already has been.

Have I piqued your curiosity? Good. What makes Teanaway Country so hard? The most obvious factor and where the comparisons to Hardrock begin, is the elevation profile. The full 100-mile course, which no one experienced last year due to a fire, climbs a total of approximately 31,000 feet. Sure, it’s still a smidge less than Hardrock’s 33,000 feet, but it tops every other iconic mountain hundred (Cascade Crest, Wasatch, Leadville, the Bear, Bighorn, etc). That said, I recognize there are some other lesser known events that can also boast upwards of 30,000 feet of climbing.

The comparisons to Hardrock don’t stop at elevation profile. I’ve never experienced the race firsthand, but the pictures are jaw-droppingly beautiful. Gorgeous alpine lakes flanked by magnificent peaks, exposed high points with little-to-no protection, and scrambling on sections that barely resemble a trail. Teanaway Country has all of that. Have you seen Lake Ann? Though not much more than a pond, it gathers in a bowl, guarded by craggy summits and talus fields. Mountain goats roam the lake shore and backpackers, looking to escape the crowds of Lake Ingalls, come for the solitude and grandeur. I’ll grant you that there may be equally spectacular points along some of the finer 100-milers, but few could top the Lake Ann basin. 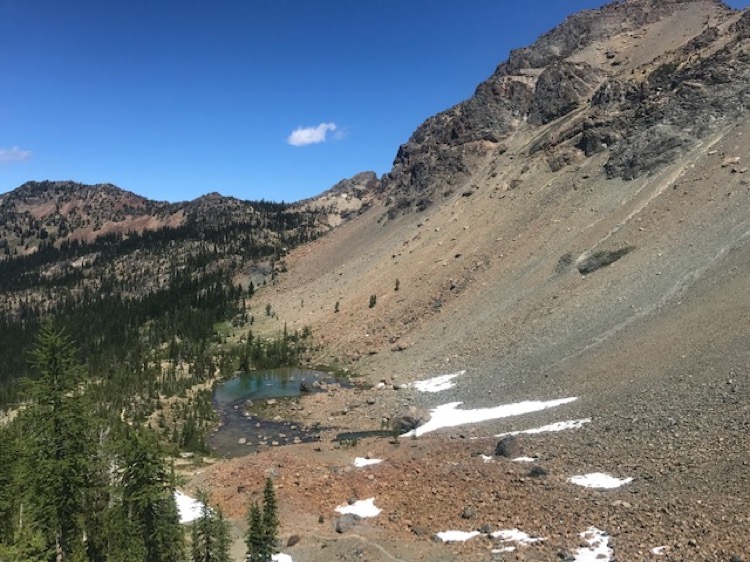 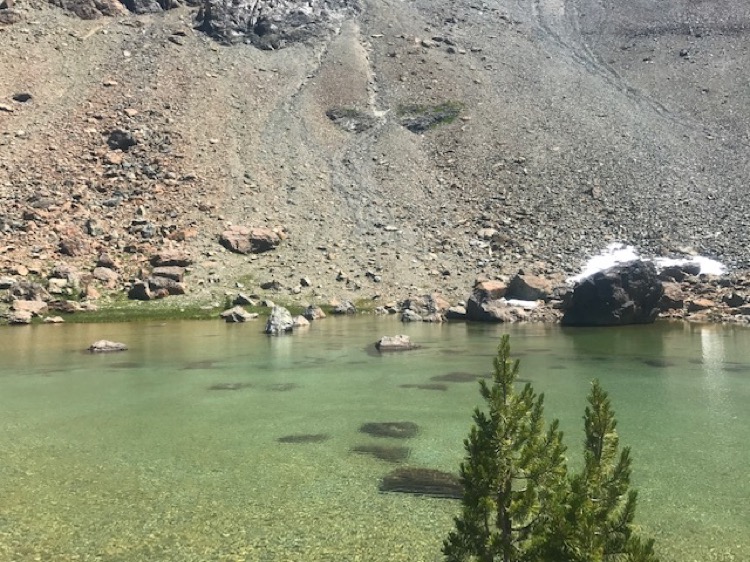 The base of Lake Ann. Photo: Brian Morrison

There is a section of trail between aid stations 1 and 2 that had to be brought back from the dead for the race to move forward. These trails, though established on many maps, had been taken back by Mother Nature. And it’s no wonder really, because the trails themselves really don’t go anywhere. Not many folks are looking to hike or backpack straight up or down on loose, rocky trails that don’t lead to some payoff. The trails between Jolly Creek and Boulder Creek are brutal. When they climb, they climb straight up. When they descend, they go straight down. The ground is loose and dry, and the rocks act like ball bearings at times. It’s nasty terrain. It’s slow going at best. What may only be a 4-mile section feels like double that. Sub 15-minute pace would be flying through this forgotten section of forest. And, you get to do it twice. On the way out and the way back, when you’re really hammered.

There is one section of the course that, although it exists on maps, we could only navigate via GPS the first time through. By race day, several closely hung ribbons were still all that convinced anyone they were on the right path. If the trail was entirely reclaimed by nature, we only restored a fraction of it. Some may wish that we’d make a real effort to properly grade the trails between Jolly Creek and Paris Creek. I would argue that the state of those trails is part of the charm of the course. Nearly every finisher pontificated about their distaste for the section, but usually with a smile.

The course isn’t rugged just to be rugged, or hard for the sake of being hard. The nasty sections make you appreciate the beauty on the other side. There’s a sense of accomplishment for getting through this course that is rare. Every 100-mile race finish is a huge accomplishment, but we all know some come with a few more bumps and bruises along the way. Just when you think you’re not going to take a minute more of the unrelenting path, you’re rewarded with another vista, lake or boisterous aid station. Enough to keep putting one foot in front of the other, wondering what lies ahead. 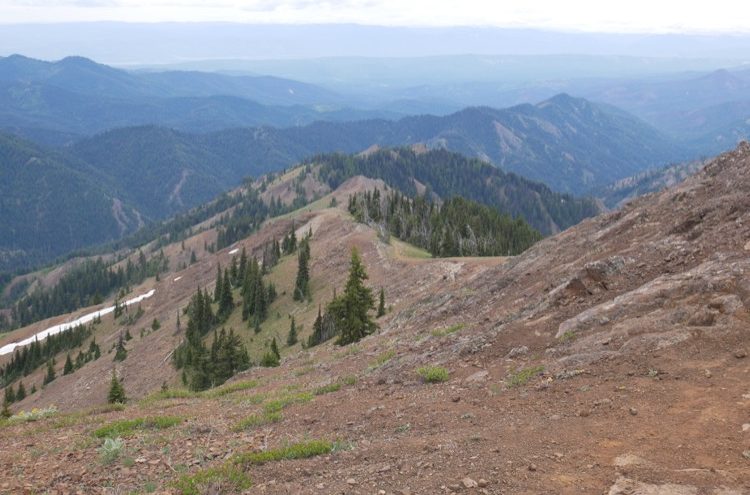 Though battered to varying degrees by the halfway point, you’ll find yourself excited to see Iron Peak and Lake Ann and Gallagher Head all over again as you make the arduous journey back to Salmon La Sac. Even though you’ve been through it once, the course continues to surprise, frustrate and ultimately delight, all the way home.

Some may say that Teanaway Country is a graduate level course or that it isn’t great for a first timer. I would simply point out that our female winner (Mel Dunn) and second place male (Richard Lockwood) were both running the 100-mile distance for the first time and they absolutely nailed it. Finishing the Teanaway Country 100 isn’t about experience, necessarily, it is about tenacity.

We’re not a Western States or Hardrock qualifier, and we certainly don’t earn you any points toward UTMB. We’re a bit of a throwback race, as I see it. The course is marked adequately, but it’s not overmarked. The start and finish aren’t going to impress anyone with blow up arches, loud music, beer gardens or free massages, but some may argue the warm embrace of the race director and a kick-ass buckle are even greater rewards. Why don’t you come see for yourself on September 7?

For the foreing people…where is this race? US is really big!

Washington State, in the northwest corner of the contiguous US. In the middle of the Cascade Mountain Range. About 100 miles from Seattle.

There is much truth in that this race is equally brutal as it is beautiful. I ran it last year and couldn’t have hoped for a better first 100 miler experience!

Things to consider if you are on the fence about signing up:
1. IT’S FREAKING GORGEOUS!!! If you want to experience the cascade range, than this is your race! Views of the Enchantments, up and over mountain range passes, sub-alpine terrain, and wolves howling (yup we heard a lone wolf howl), OH MY!
2. Altitude is relatively low. That’s one factor you really don’t have to worry about.
3. Don’t let the elevation profile scare you! For most of us normal folk you will be hiking the uphills. As long as you are incorporating hiking into your training, you should be good!
4. The downhills are long and at times technical; however, at the bottom of most of those descents you have your support crew and aid station support welcoming you! It was such a boost and motivator to get to the bottom where you were greeted by a lively group of volunteers and spectators!
5. It’s a well loved race! Brian is an incredible RD and pours his heart and soul into TC100 and it shows. A new race it may be, however, well seasoned trail runners and volunteers make this race feel like a true classic 100.
6. No lotteries, no points, no fuss!!! People who run this race, run it because they want to run it! Not to acquire points or get tickets to get into another race. This gives the race a very authentic and genuine feel to it.
7. Roslyn, WA = ADORBS!
8.) Super crew friendly race! Very easy to bounce from crew AS to crew AS!

There is no doubt that this race will blow up at some point and join the ranks of other 100 milers, which will sadly come with a lottery, so don’t wait for that to happen and sign up!!!

We’re running the Teanaway half marathon in June… excited to see this gorgeous part of the world!

This race is in the works for me in 2020! The Teanaway area has had a hold on my heart since I first hiked there back in 1991. I’ve backpacked, hiked, run, camped there both alone and with family/friends for the last 27 years and it is breathtaking! I’ve never run a 100 and this will be my first, so it’s great to hear others have done it as their first. I’d love to run it this year, but a family trip and pacing a friend at Mountain Lakes will prevent me from entering this year. See you in 2020 Teanaway!

Tara, talk to John Payne if you have not already.
BEC

Will do! I didn’t know he had run it! He’s an animal. This is a very intimidating course, but I also love the area so much it’s worth a stab at it!

Ran it last year. Loved it. Got savaged. I hate, repeat, hate running with poles in most races. As a lark, I put some in a drop bag just in case I needed them for the way back. Thank God I hit that drop bag on the way out… or I don’t think I would have finished. Brian is not kidding when he says it’s steep. Seriously do this race, but seriously… bring poles.

I consider myself a connoisseur of bad ideas, and making the Teanaway your first 100-miler is certainly one of them (my first was the unsupported Plain 100). I ran the inaugural Teanaway 100 but I underestimated the cumulative impact of that much elevation on my legs and ran the first half too fast, plus I missed a turn that added a couple of miles and 1300 feet of elevation change, so my time was much slower than I had hoped it would be. If you have never run 30,000 ft of elevation gain in one shot, then you are statistically a lot more likely to end up very slow or DNFing than in a podium finish. But assuming you ignore (or don’t mind) that inconvenient fact, my advice would be:
1) Be very conservative with your pacing, especially in the first half. The elevation gain really adds up;
2) Your shoes matter because nearly the whole race is on very steep terrain, including a lot of traversing across slopes. I was wearing some clapped-out old Altras with very wide toe boxes that let my feet slide around and it was pure hell;
3) Don’t underestimate the potential of the weather to get cold and wet suddenly. The weather in the inaugural race was mostly OK, but the Cascades are no joke.
Good luck! The course is beautiful and yes, brutal, the race was well-organized, and the volunteers were wonderful, all as advertised.

Helpful input John! I may pick your brain more next year 🙂 I have no illusions of things going swimmingly, but love the area so much it’s worth a try at it!