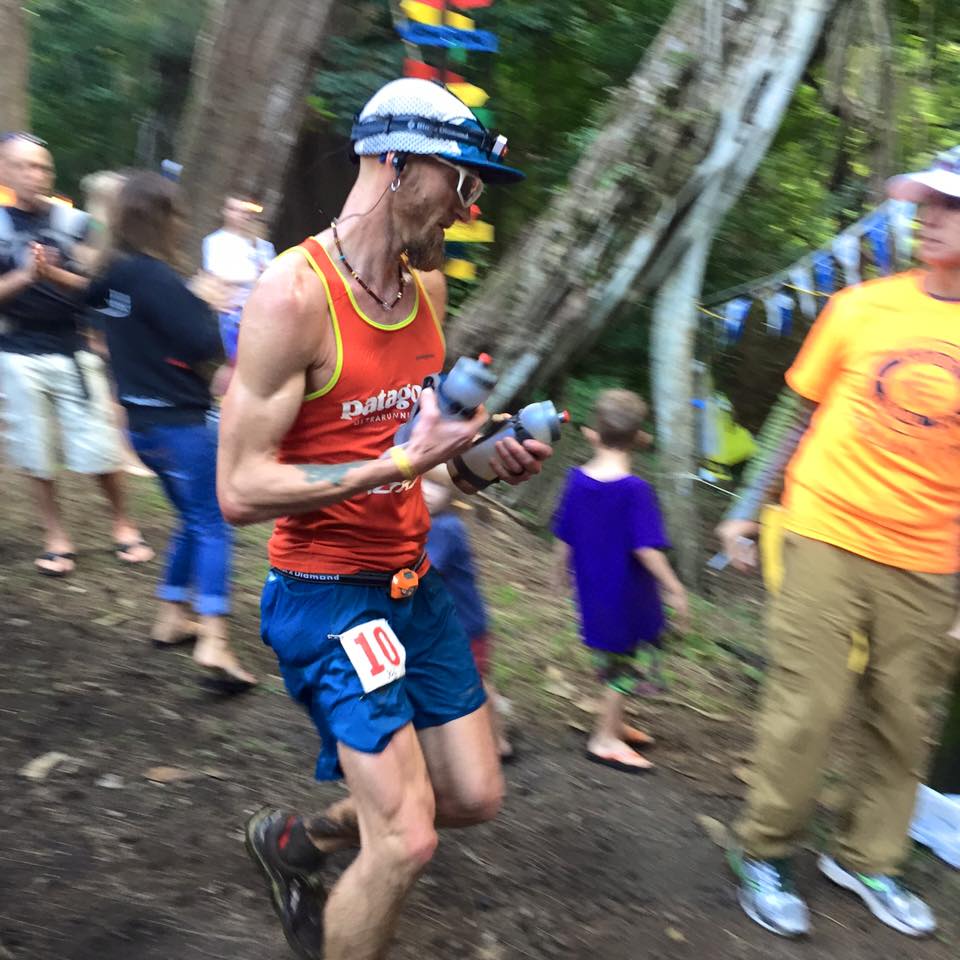 Jeff Browning on his way to winning the 2016 HURT 100. Photo: Jiro Ishiduka

Jeff Browning, an elite ultra marathoner and 23-time 100-mile finisher, recently completed and won his 14th 100-miler – the HURT 100.  Just seven weeks prior to race day, he made the drastic decision to experiment with his own body by transitioning to an Optimized Fat Metabolism (OFM) diet in hopes that his health problems would disappear.

So, what is an OFM diet? In simple terms, it is a high fat diet with minimal carb intake.  The human body has a much larger percentage of fat than sugar stored away, both of which the body converts to energy.  The OFM diet helps increase the body’s ability to burn fat instead of sugar –  therefore maintaining consistent high levels of both mental and physical energy.

Jeff turned to the OFM diet after suffering from mild adrenal fatigue symptoms and candida – an overgrowth of yeast in the gut – which would flare up after each 100-miler. During previous races, he would ingest on average, 60-70 gels, as well as other aid station carbs amounting to approximately 400 calories per hour. After crossing the finish line, Jeff would go through recovery experiencing swelling, sleeplessness and haziness for almost a week. He reached out to Zach Bitter, another elite ultra marathoner who began the OFM method in 2011 and was also involved in the FASTER Study, which tested 20 ultrarunners and Ironman triathletes as they consumed a high fat diet over an average of 20 months during training.  Jeff read the positive results of this study and immersed himself in podcasts and books such as The Art & Science of Low Carb Living, studying for hours on how to adapt his body from burning primarily carbs to mostly fat. He also talked to Peter Defty of Vespa and received in-depth consultations on the OFM protocol.

Jeff Browning (aka Bronco Billy) on his way to winning the 2016 HURT 100. Photo: Jiro Ishiduka

Jeff and his family had already been eating whole foods, while making their own kefir and kombucha for over 10 years. They changed things up a bit by removing both grains and sugar, and introducing more fats such as avocado and coconut milk combined with vegetables as a main source of carbohydrates, while backing off on protein.  Within those seven weeks, his body began building “pathways” to start burning more fat.  For both Jeff and Zach, the effects were noticeable almost immediately.  But for those who have lived a high carb lifestyle for an extended period of time, the process could take 8-12 weeks.

Jeff’s first 100-miler after transitioning to the OFM diet was a success, both in competition and energy.  Throughout the HURT 100 he maintained consistent energy levels, never experiencing the lows that ultrarunners are constantly battling after 50+ miles.  Jeff took in half of the amount of calories he normally consumes, drinking Roctane between aid stations and eating a few banana chips to fill his empty stomach.  As for recovery, Jeff had minimal swelling and was clear-headed the day after his race, increasing his enthusiasm for the OFM method.

While every body is different, Jeff, Zach and the ultra athletes that participated in the FASTER Study, have all volunteered themselves as guinea pigs for good reason. Success. The thought of running for hours on limited calories without energy lows is incredibly appealing for most of us, but as with any change in nutrition it requires we alter our eating habits. While it may not be for everyone, Jeff has proven that the OFM diet has converted him into a believer, as well as a fat burner.

WOW! I tried this diet for a season and it left me vomiting on the trail just about every run. Not to mention pounding headaches and the inability to finish many training runs and races. The body requires carbs/sugar to function, especially during exercise, and definitely during endurance sports. If you were in fight or flight mode your body would learn to pull from fat stores. We are rarely in this situation. A fellow ultra running friend was convinced this was the way to go and is now unable to run secondary to developing colitis as a result of the OFM.
Caution to those trying this diet. It may work for a while but then the body begins to malfunction due to not having crucial energy sources from carbs/sugar.

Awesome write-up, thanks for detailing the “why” Jeff took to the new diet. I’m a candida sufferer as well and have learned (the hard way) that this is the only safe way for folks like me to eat. Eventually I was able to bang out 4 hour runs on just water and electrolytes, I was fully convinced.