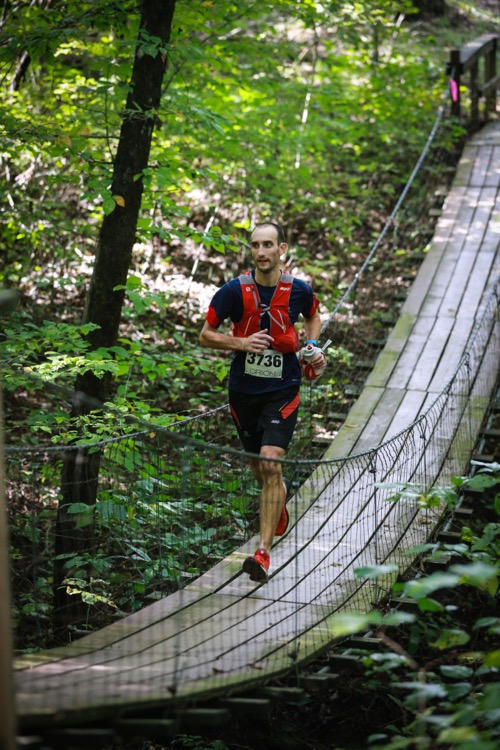 Stump Jump 50K: A Broken Hand and Bite in the Butt

Going into Stump Jump 50K this year, there was a bit of apprehension in the air. I was coming back from an injury in the spring and with high temperatures forecasted this year, I was a bit worried. My wife, Emily, also took some time off in the spring but had back-to-back wins here in previous years. And our son Miles, well, he just hadn’t really been training much at all for the 10-mile event. So little, in fact, that we actually told him that we would give him one dollar for every minute he beat his time by in last year’s race. (Spoiler alert: that would come back to bite us in the butt.)

On race morning, I decided to start out wearing my pack, which I never do for just a 50k. Normally I prefer to use two hand-held bottles with a few gels packed inside, but thought that wearing my pack would force me to run slower at the start. I really wanted to take myself out of any racing up front. Plus, I didn’t want to have to listen to Emily preaching to me about my hydration and nutrition again.

At the start we found a few fast folks that we hadn’t realized signed up late, which normally would only fuel my apprehension and pre-race anxiety. For some reason that day it seemed to calm me, almost like it forced me to give up on racing all together. As the race started I pulled back even further than I really wanted to, back where I expected Emily to be, but she had actually done the same.

One of the things I love most about running Stump Jump is being on this section of the Cumberland Trail. It has some of the most beautiful views of the Tennessee River Gorge, and that day the river was flowing at flood stage from all the rain they had gotten in the days leading up to the race. That rain had also left the very technical, rocky Cumberland Trail very treacherous to navigate at times. As I reached the Indian Rock house aid station at mile 15, I finally started catching a few other runners. I got a bit excited but forced myself to take my time and make sure I had everything I needed. I still forgot one thing. Even though I had lubed up well pre-race, or so I thought, I was drenched from the crazy high humidity and my inner thighs were on fire. I knew if I didn’t do something, I’d be dripping blood by the end. Thankfully a lady, nay – an angel, at the mile 18 aid station was able to hook me up with some Vaseline. 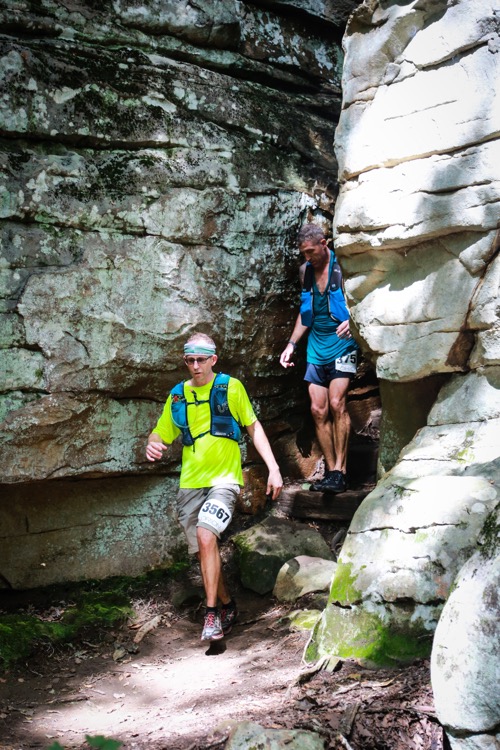 From miles 18-25 I really tried to pick up the pace. This loop has an infamous boulder garden, and I knew with the recent rain that this section would be very sketchy. Lucky for me, I started cramping in my right quad the moment my foot touched the first rock, and all I could do was walk through the slick, wobbly, unpredictable boulders which may have saved my life. I’m not so good when trying to run fast on unpredictable footing, hence my three shoulder surgeries and many scars scattered across my body, all from trail running falls. As soon as I was through the rock garden, my cramp subsided and I caught another runner as I came into the mile 25 aid station.

Here, my dad informed me that Emily was only about 4-5 minutes behind me, and had already moved up to first female. He also let me know that, despite the fact I had passed several guys since the last time I saw him, I was still currently sitting in seventh place. The first half of the last section is mostly flat but a bit technical terrain, and with the wet rocks, I knew I needed to be cautious as I tore through the trail desperately trying to make up time on the six guys in front of me.

In this same section, Emily actually stepped on a flat, wet rock which sent her foot flying out from under her and her left hand came down hard on that same flat, wet rock. She got up and tried putting her bottle back on her left hand but immediately pulled it off because of the popping, clicking and immense pain (her hand ended up being broken and required surgery a week later). She walked for a minute, one of the few times she walked on the entire course, and that was when a family trying to enjoy a hike in the woods rounded the corner. She quickly told them to watch out for that slick rock behind her and took off.

As I crossed Suck Creek Road with around 3.5 miles to the finish, I had all but given up on catching anyone else. I was sitting in fifth and feeling good about my run that day. As I started the first of a series of two climbs, I caught a glimpse of another runner slogging up the hill. I knew I still had running in my legs so I powered up and into fourth. I felt great through the entire climb, then bombed the descent down to Suck Creek, across the bouncing suspension bridge and then powered up the next climb thinking there might still be a chance to make a move onto the podium. I pushed on into the finish only to find that third place was a good 20 minutes ahead of me.

I had accomplished what I had set out to do that day and ran a good 15 minutes faster than the previous year, finishing in 5:14:30. Luke Paulson took the win with a 4:36, the fastest time on the new course, Drew Macomber took second in 4:46 – also faster than any previous time, and David Riddle finished third in 4:54. Emily managed to get the win running a personal best on the new course of 5:44, even with a broken hand. She was followed by Kari Laramore in 6:27, and Shannon Wheeler Deboef in 6:50.