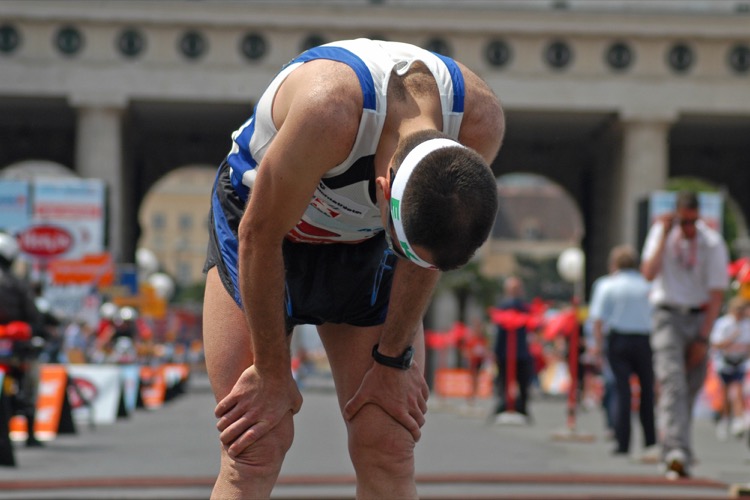 Two years ago I stood at the finish line of my first half marathon, confused. I was confused because I hadn’t found the event to be particularly cathartic, yet I was surrounded by people who had somehow found a singular, defining experience that morning. And that something-is-missing feeling pretty quickly turned into a particular type of despair: was this why people run? What had I done wrong that prevented me from reveling in a sense of accomplishment? And then larger questions—questions to which I thought running was supposed to be an answer—crept in: am I incapable of happiness? When my brother convinced me to run 13.1, I didn’t know anything about running. I knew marathons were supposed to be life-altering and purifying, occasionally borderline-spiritual experiences, and that this feeling of release and affirmation and finality came mostly from having endured something awful. One was supposed to struggle and doubt, then emerge a new person—a person defined mostly by having persevered through struggle and doubt.

Yet, a good deal of my struggle and doubt came immediately after finishing. After I’d crossed the finish line right on schedule, received my medal, worked my way through the chaos to the snacks and beer, I started to sense a cloud looming over the hardware around my neck. And as I looked at my race t-shirt, bib and medal, it dawned on me: I had just run half of The Big Race.

This self doubt certainly says more about my self than it does about the act of running a half marathon, but surely I’m not entirely alone in being made to feel inadequate by measuring one’s running self against others. Part of why we run has to do with accomplishing things most people can’t. So it can be particularly crushing to realize your accomplishment is being measured by its small nature relative to other accomplishments. Granted, distance is not the only metric statistic-loving runners monitor, but to a casual first time marathoner/half marathoner, distance is just about everything. Distance is the conduit to struggle and doubt, the thing by which we see ourselves becoming something new.

But measurement relative to the 26.2 benchmark isn’t the only thing that creates a strange atmosphere at a marathon/half marathon event. General reverence for The Big Race has made it hard to experience the event separate from anything else—we carry with us our expectations for the race and everything after; we’re out there look for a singular experience. And the thing of it is, no matter how individual the effort, singular the journey, or cathartic the experience, we find ourselves sharing it with thousands of other runners in the post-race festivities. Through the struggle and doubt one of the few things we’re certain of is that finishing puts us in rare company. By finishing we get to be part of that small group called Marathoners.

This isn’t to say that running ought not to be communal or that the growing popularity of marathoning voids it as an accomplishment, but something about the crowd attenuates the experience. In 2016 about 550,000 runners ran in over 1,100 marathons in the US, making the American marathoner about as common as the Wyomingite. And for every one person who marathoned last year, there are two others who have done it before—around 1.6 million Americans can say they’ve run a marathon. Even if we try to ignore the numbers, a post-race party still screams “growing market.” The race packet is a dozen or more advertisements, race day vendors allow one to replace blister-inducing shoes before even going home to shower, and even marathon names have become about as subtle as those of college bowl games (compare the San Diego County Credit Union Poinsettia Bowl to the Lehigh Valley Health Network VIA Marathon). And while the struggle and doubt are in no way diminished, the elation that follows can feel odd when we cross the finish line and are immediately pushed back into the role of consumer.

So if the problem with the modern American marathon is that it draws too many runners and sponsors who aren’t really investing in running, the solution seems obvious: keep running. Millions of 5k-ers become hundreds of thousands of marathoners becomes just a few thousand ultramarathoners, and we find ourselves, at last, in the rarest of company. We start with the 50k and by definition, we don’t know when or where to stop, finding the point in which time ceases to matter and distance really does become everything—an ironic goal, given the runner’s obsession with data.

Because within that numbers-oriented mindset lies the problem, if there is a problem. There’s always another mile to be run, more elevation to be gained, higher temperatures to endure. Plus, the growth of the marathon seems miniscule compared to that of the ultramarathon. Since 1990 marathoning has grown by 145% (from 224,000 marathoners to 550,000) while the ultra community went from 33 races to 1,473—a growth of over 4,300%. And so the ultrarunner, who looks to push the limits both of their body and the larger conception of what a human body is capable of, suddenly has to deal with much more mundane numbers, like race lotteries and growing crowds.

Though this is perhaps a dangerous way by which to come to the ultra, it is what brought me here—my desire to be not just another runner, another marathoner, but to find an experience of struggle and doubt through which most people would not put themselves, to know that my limits are higher than most. Dangerous because even if we run that extra mile or summit that next ridge, there are other runners already there, competing against each other and looking to the next mile. And if other runners prevent the struggle and doubt from turning into joy and pride, everything becomes a series of struggles and doubts.