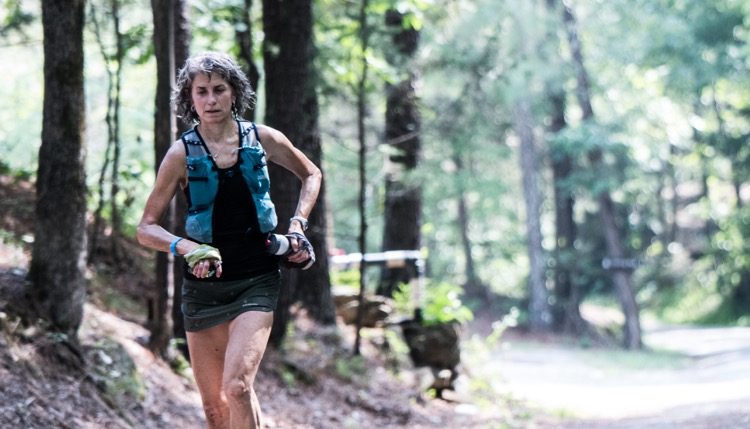 Shawnee Hills: Back in Action

Scheduled just two months after I had hip surgery, Shawnee Hills 100 was going to be my comeback race. I was healed enough and needed a shot of endurance (and confidence) for Superior 100 two weeks later. But was I ready?

Shawnee National Forest, where the race would take place, was nearby. The timing was perfect. And the race checked out nicely on paper: one 3-mile-ish loop at the start and three 32-mile-ish figure-eight loops with a 32-hour cutoff. Technical but not absurd, hilly but not out of reach. There were 100k and 50k options, too, so I would have a variety of runners for company.

Race morning was muggy, but there was almost zero chance of rain. After my last four 100-milers with wet feet, this one would be dry! At 6 a.m., 26 other brave 100-milers and I started. The 100kers started soon after, and then the 50kers.

The first section was technical but not in the way I expected. There were some roots and rocks, yet it was the frequent little creek crossings and sharp turns that kept me from settling into a groove. Thirty-two hours was usually doable, but I wasn’t in great shape or making good time.

The first aid station at 5.75 miles, Trigg Tower, was in the middle of the figure-eight. The support I received here, as with every aid station, was extensive and full-service, so all I had to do was run. I got fluids and headed to Jackson Falls as the day heated up.

This section of the course was different. (In fact, each section was unique.) I ran through a tunnel under a railroad and then along the bottom and finally up to the rim of miles of fantastic rock wall formations. It was hard to watch the trail in front of me because I wanted to see all the twists, turns, boulders and caves. It was my favorite section. 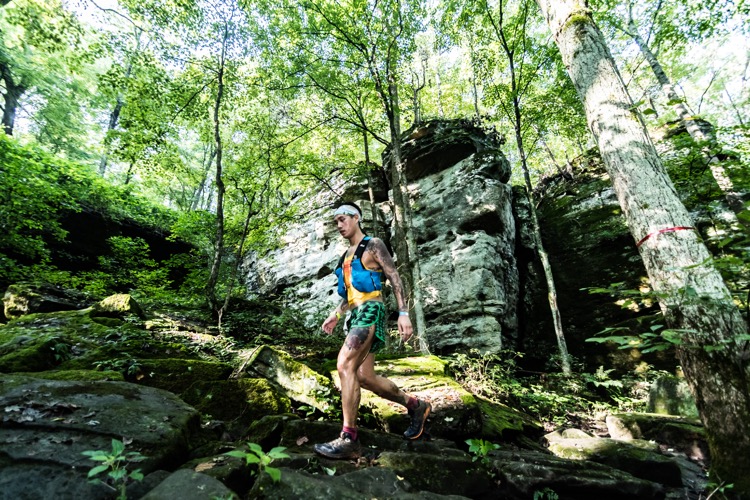 EJ Arroyo running through Jackson Falls on his way to finish first in his age group in the 50k. Photo: Marcus Janzow

Jackson Falls Aid Station was a happy oasis before the course turned onto shady gravel road, branched onto trail, crossed a tiny stream and continued through easy woods.

By late morning, the heat and humidity were significant. The course was mostly shaded, but the air simply wasn’t moving. Before I knew it, I was dehydrated. And my feet were wet—not from the stream crossings, but from my own sweat.

I rolled into the third aid station, Cedar Road, at 17 miles and downed extra fluids. The next eight-mile section was the longest but easiest running. Gently rolling trail, some strewn with pine needles, eventually crossed a short dam and returned back through the train tunnel to Trigg Tower.

Another 4.1 miles of relaxed running got me to the enthusiastic Cinder Path Aid Station, the last one before the start/finish. This last section packed a lot into its three short miles: hills, old road bed, long swinging bridge, more rock wall and a little gravel road near the loop’s end.

One done. Now, all I had to do was repeat it two more times.

The second loop was grim. I focused on rehydrating and moving as best I could. Runners of all distances were now suffering from the 90-degree temperatures, humidity and unmoving air. It seemed like I was pushing cutoff, but my mind was fuzzy. I kept moving. Night cooled down but, frustratingly, stayed muggy.

I was relieved to start the third and final loop but still worried about cutoff. Outbound at Trigg Tower before dawn, I ended up, bizarrely, with two almost dead headlamps. I headed optimistically toward Jackson Falls, hoping to see the trail well enough to get there at dawn.

And I did. I turned my headlamp off as I entered the aid station for the last time and headed out for Cedar Road.

Mentally, leaving Cedar Road was heading home to the finish. I made the best of the cool morning air while I had it and rolled through Trigg Tower 2 and Cinder Path aid stations one last time without lingering.

I crossed the swinging bridge and ran all the way in, crossing the finish line at 30:53:33. The heat and humidity took a toll: I was second female and the last of only seven who finished.

But I was back.

Susan is a fighter. One tough cookie. I was at one of the aid stations. TJ Liddell.

Wow well done! I know how hard it is when you’re physically unwell but your determination is admirable and an inspiration. Happy running 🙂