Francesca Stone (a.k.a. Frankie), a career event planner and hospitality professional, lives by the motto, “perfect will be just fine.” Having completed Umstead 100 multiple times, she was the perfect woman to guide me in the dark for the last 25 miles of my first 100-mile race.

Upon our first introduction, Frankie quickly volunteered to fold me into her “tribe” at Umstead and take care of all crewing, logistics planning and finding guides to run alongside me. Knowing this 230-pound 3:17 marathoner was open to listening and learning, she checked her professionally honed diplomacy at the curb, and did some cognitive reprograming so I would embrace the idea of running so slow that I’d be chomping at the bit early in the race. She went as far as threatening a time-out if I finished the first 12.5 mile loop in under three hours. When I entered the turnaround at 2:45, I was ready for my smackdown, but she let me go with words of praise and encouragement. Whew! 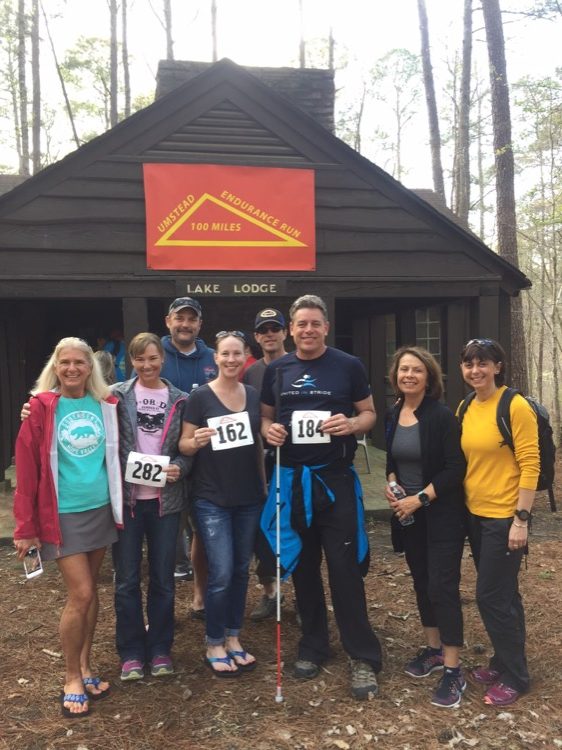 I feel blessed to have had the opportunity to make it to the start line of a 100-mile race. My ultrarunning journey was threatened to be over 2.5 months after I completed my first 50-mile run in April 2013.

While on a five hour tandem bike training ride for the inaugural Ironman Lake Tahoe, my guide and I were struck nearly head-on by a 91-year-old woman. We were in the shadows and the rising sun blinded her as she turned into a church parking lot. My guide ricochetted off of the hood and windshield, coming to rest on the ground. I flew through the windshield of the Chevy Lumina head first, waking up when emergency personnel were on the scene. I later found out that the elderly woman, in shock, cradled my head in her lap as I lay unconscious.

My helmet cracked in half but saved me from more serous injuries. The accident resulted in a rather severe concussion, two facial fractures, a broken C7 vertebra, lacerations and blood loss. While my neck remains broken to this day, I sustained no spinal cord injury. A life-flight ride to the hospital, a hospital bed in my living room for a month and a neck brace for over three months slowed me down but made me more determined to fight my way back. I was inspired by my blinded veteran peers who traumatically lost their vision in combat. After all, they had it much worse and set a wonderful example of perseverance. Out of this inspiration and my desire to prove to my tandem pilot and guide that I would be fine, I ran the California International Marathon five months and three days after my accident, then went on to finish the 2014 Boston Marathon and the Sharkfest Alcatraz swim before the one year anniversary of my accident.

I had pretty much given up hope of doing anything beyond a marathon distance. Chronic nerve pain in my neck and upper back flared up with any intense training, and road vibration of any kind set my nerves on fire. I had to walk away from my tandem bike and was fearful that, if I injured myself running, I’d be done with endurance sports altogether. My dreams of running 100 miles were put on hold.

There were many things that had to fall into place for me to make it to the Umstead 100 start line healthy, properly prepared, and injury free. To begin with, I had the blessing of two local runners from VSP Vision Care, Rick Santos and Jenny Iskandar, who were also registered for Umstead and ran all but a few of my Saturday long runs with me. Matt Linderman and Eric Waterman continued with their long routine of running with me once per week as well. A steady rotation of other running guide friends and my running guide dog, Klinger, made it possible for me to run six to eight times per week.

Umstead is a perfect race for a visually impaired beginning 100-mile runner. It includes eight 12.5-mile loops on wide limestone paths allowing the guide to run at my side. There is only 1,000 feet of uphill on each loop and the elevation is only a few hundred feet above sea level. The supportive atmosphere and well-stocked aid stations made it the best-supported race I’ve ever seen. There were some technical areas that had to be negotiated with great care, but it was nothing like the single-track trails I’ve ran in California.

The VIP Frankie Stone Umstead experience also included the “California Palace,” a well-stocked support van 100 yards from the finish, directly alongside the trail. After completing each loop, I was able to collapse into a chair like a prize fighter between rounds, and Frankie and her team would go to work getting me ready for the next loop. This is also where I exchanged guides. 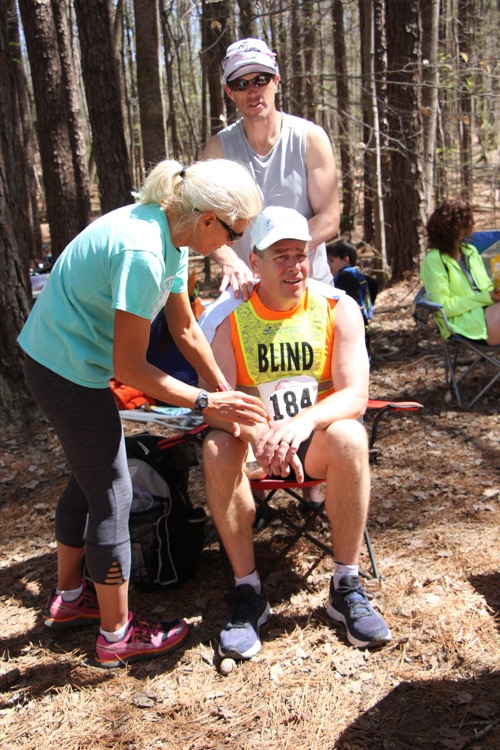 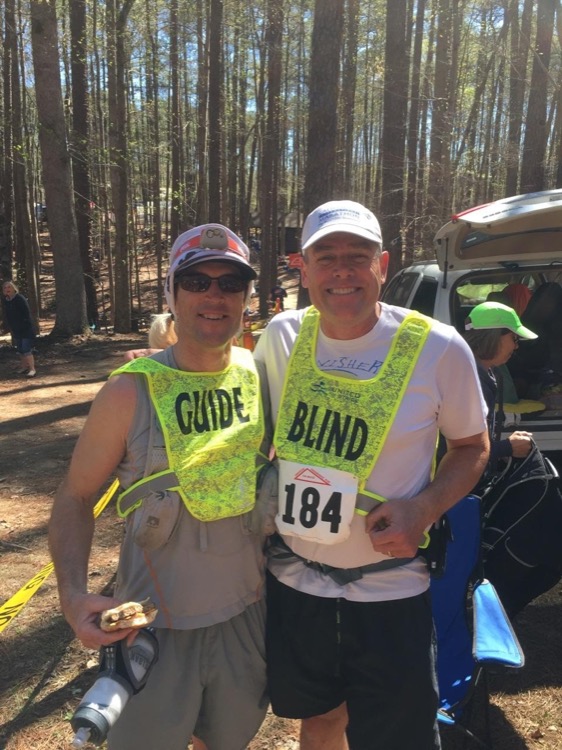 As good fortune would have it, my first guide, Alan Barichievich, is a physical therapist. Since my original plan to manage neck nerve pain with Advil was nixed, Alan was able to use KT tape on my neck and my neck never became an issue. Alan, like the entire guide and crew team, had extensive 100-mile experience, so I was fortunate to have someone teach me on the fly.

Dr. Fogelman, an optometrist, guided me for the next 50 miles. I love it when eye care professionals guide blind runners! In a sense, they are helping people see, but in a different way. Dr. Fogelman warned me that he talked so much that I might wish I were also deaf, but truth be told, I loved hearing about his family and running adventures. He runs in so many races, it seemed like he knew most of the runners on the course. He’s got to be the ultrarunning ambassador of North Carolina. 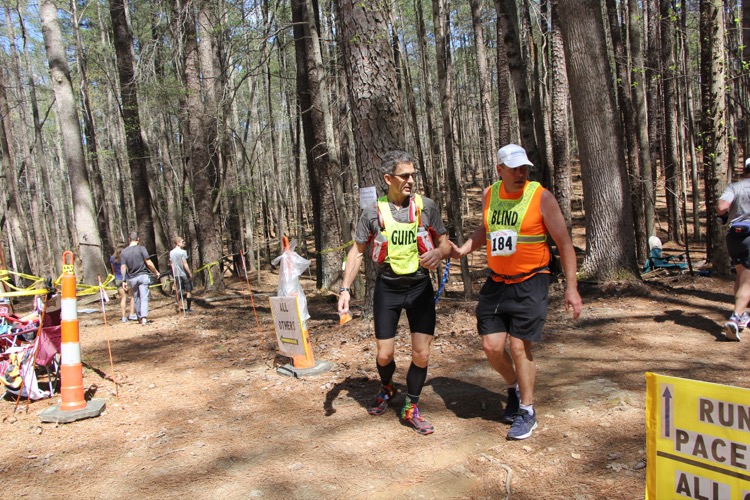 Eric Fogleman and Richard Hunter prepare to stop at their team’s van for some TLC. Photo: Teri Saylor 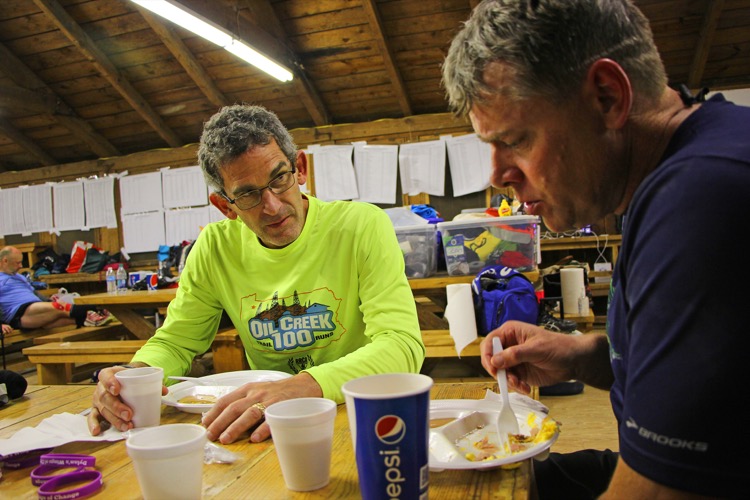 When one embarks on something as epic as a 100-mile foot race for the first time, there are many uncertainties. Several friends of mine put Umstead in the finish column months before race day. While I appreciated their vote of confidence, Umstead was 50 miles of uncharted distance; my longest physical effort ever was 11:55 at the 2011 Ford Ironman Florida. I expected this 100-mile run to be the toughest thing I’d ever attempted. I was forewarned that 100 miles was a completely different beast than my three previous 50-mile runs and I would face my demons. Crazy as this sounds, I actually relished the idea of butting up against my breaking point and seeing what I was made of.

In retrospect, I never did face my demons on race day. In fact, because of the training support, crew support, and experienced pacer/guide support, I can honestly assert that I was not disabled by my blindness by this race. If anything, I had the advantage of having an experienced team from the start when most ultra runners only get this sort of support beginning at mile 50.

I expected a time in the race where I could no longer eat or drink, so I was extremely disciplined in managing my nutrition, water, Vespa, and salt intake. At mile 62, I told crew team member Diane Forest that I was waiting for my stomach to shut down, and she told me that it would probably not happen if it hadn’t happened by then. I continued with no difficulty throughout the race.

The most challenging part of the race was the seventh loop. It was dark, late in the race, and sleep fatigue caused me to drift, but my last guide, Frankie, either reined-in my hand-held tether to keep me from running off the trails to the left or used her body as a bumper on my right. The sound of people retching echoed through the trees and passing walking zombies through the hills made me very thankful that I was fairing so well. One of my good friends, Jenny, later shared that she had hallucinated soft couches alongside the trail and insisted to her pacer that would be a good place to take a nap.

Frankie expertly gave me orders of when to run and when to walk during the last 12 miles. Strangely enough, fatigue had left me entirely and the soreness in my quads had disappeared. Frankie became increasingly excited for me as we knocked down the remaining miles. In an almost rude fashion, I told her that I was there to cross the finish line and that I was not going to celebrate anything until the job was done. She did insist on a mini-celebration when we passed the 90-mile mark, so I succumbed with a restrained but enthusiastic “woo hoo!” I knew that I would start choking up if I started telling Frankie how thankful I was for her and everything she had done for me. There would be time to celebrate when I was finished.

When we crossed the finish line in 24:29:47, I caught Frankie off guard by celebrating in unrestrained fashion as I received my first 100-mile belt buckle! Yes, Frankie, perfect was just fine! 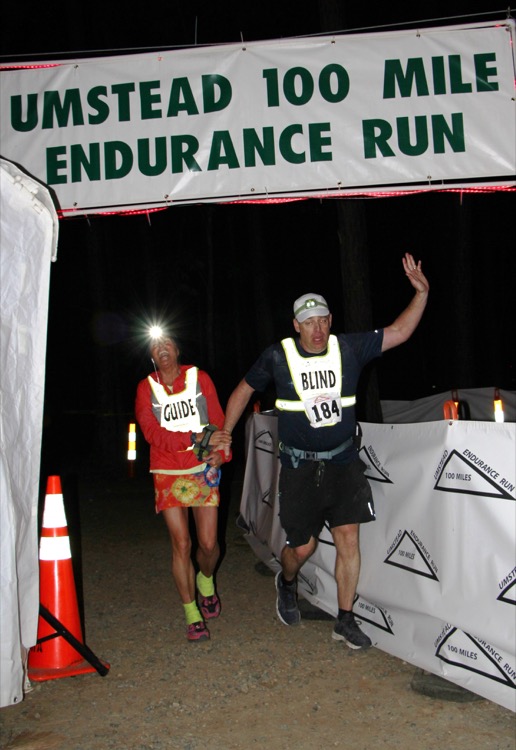 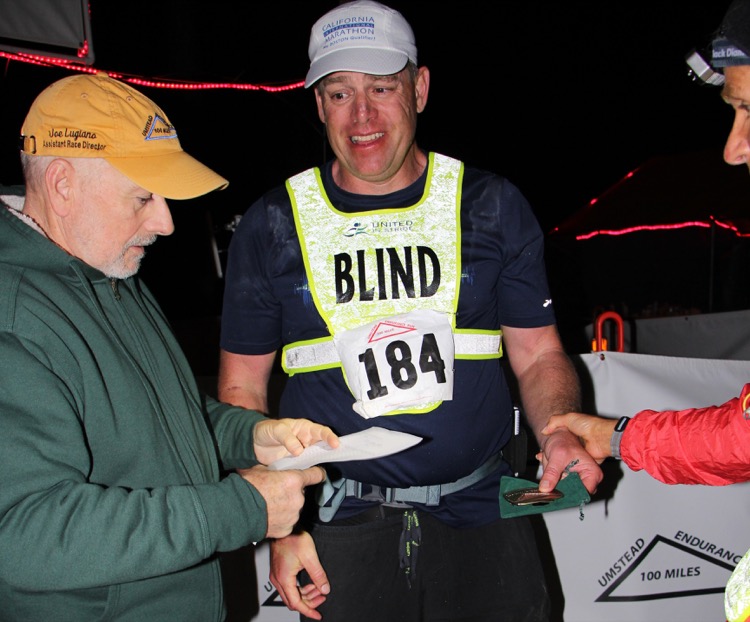 I could not have started this adventure without the support of so many people, both named and unnamed in this race report. I learned that I am stronger than I think I am and that my body can go further than I thought. I have great respect for the distance and a healthy fear of the challenge was the fuel I needed to make it to the start line and to cross the finish line. I’m also thankful to God for opening up the doors He has opened to allow endurance sports to be a platform for me to impact the lives of others.

If you would like to serve as the eyes to a blind runner in your community, please create an account on United in Stride, an online database that unites sighted guides and blind runners across North America.