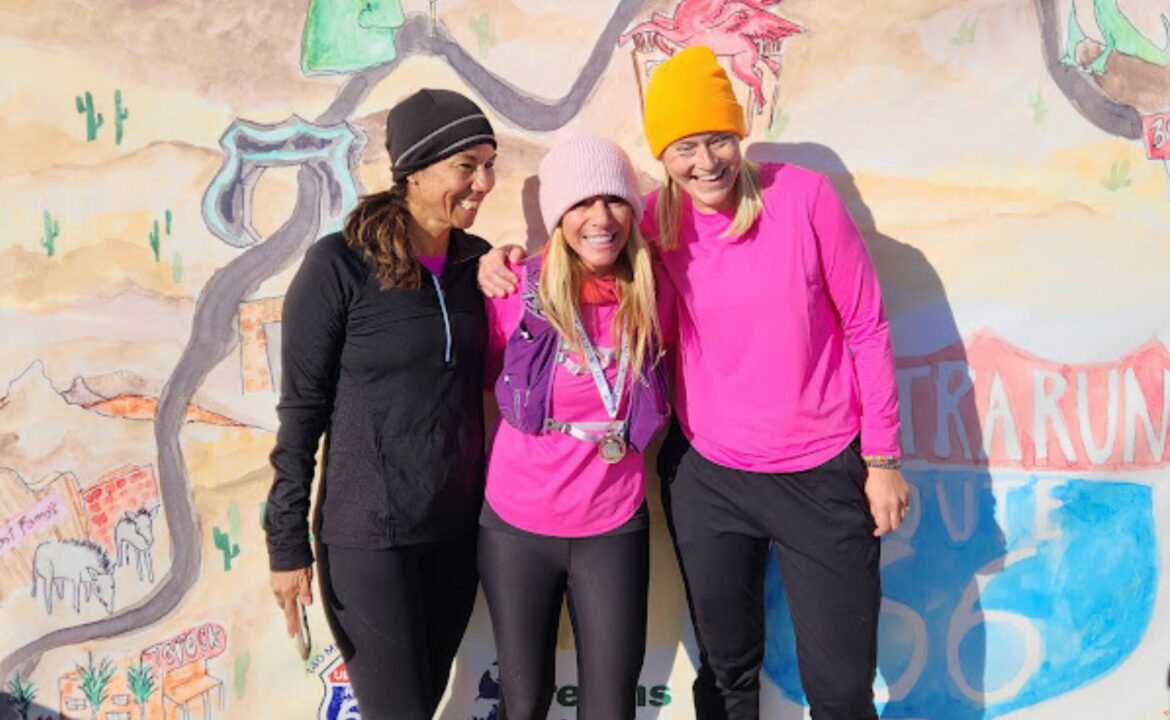 The author (center) with crew Carla (left) and Mollie at the finish. Photo: James Chung

Ultras remind me that the world is such a big and welcoming place, which was the case for Marshall and Heather Ulrich’s inaugural Route 66 Ultrarun. The race consisted of 140 miles across the longest remaining unbroken stretch of Route 66, from Seligman, AZ, to Topock, AZ, and passed through Grand Canyon Caverns, Peach Springs, Kingman and Oatman, to the finish at Topock66 on the Colorado River.

At 7 a.m. on November 11, the day Route 66 was established back in 1926, the 95-year-old “guardian angel” of US Route 66, Angel Delgadillo, waved the flag, volunteer extraordinaire James Chung counted us down and 15 runners, ranging in ages from 34–71, were off, bundled up to combat the 20-degree temperatures, running in a pack for the first mile behind Marshall and Heather in a classic red convertible.

The full lineup of racers at the start line. Photo: James Chung

As we made our way from Seligman, at an elevation of 5,258 feet, with its quaint shops and Route 66 Americana gusto, and moved into wide open fields en route to Peach Springs, I marveled at the expanse of sky and land. And yet, early on, the mile markers counting down 140 miles filled me with fear and doubt. I didn’t know if I had it in me to go the distance. 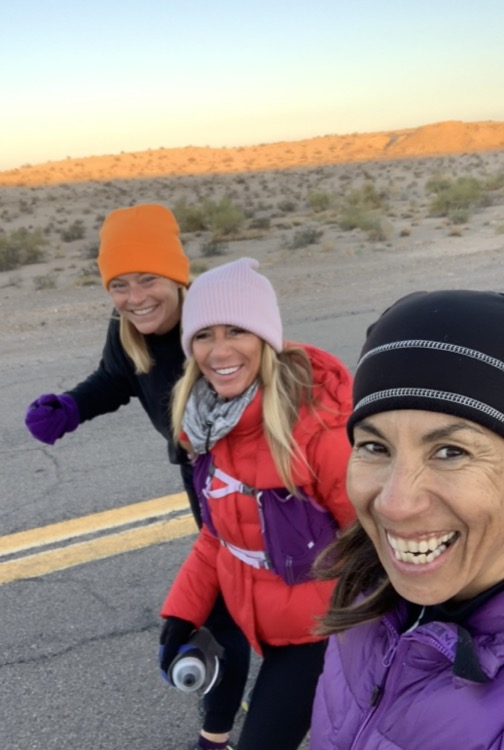 After we hit the first check point at Hualapai Lodge, around mile 37, the first night’s sunset came early. Swirls of oranges, pinks and reds left my crew and I awestruck, only to be outdone by the Beaver Moon, which rose in our rearview and then was overhead, illuminating the highway as we ran.

There was so much magic and history on this course, including the Hackberry General Store, around mile 60, which remained open for us into the freezing first night, and they even warmed drinks for me and my crew in their microwave. The store was a journey back in time, filled with license plates, gadgets, mementos and artifacts from the 1940s through the 1960s.

In Antares, around mile 65, we encountered the Giganticus Headicus, a 14-foot-tall Tiki-style head created in the early 2000s by local artist Gregg Arnold. It was there that after much debate with my crew, we opted to take a break and sleep a few hours at a hotel. It was the first night and we knew I’d probably be out there a second night, as well. It was a tough decision to leave the course at 2 a.m. knowing it would set me back, but it was the right one. We slept, and by 7 a.m., were back on the course.

My legs came back to life Saturday morning, and by 10 a.m., the weather had turned to bright sunshine and a crystal-blue sky. Around mile 80, when I changed into new running shoes and my crew brought me a latte, I felt as if I had gone to heaven. With no aid stations on the course, my crew was my lifeline. 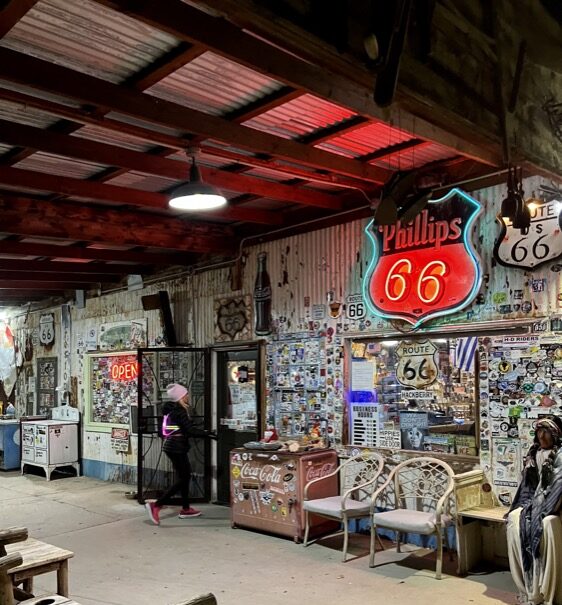 After the second check point around mile 90, the race took on a new adventure as the road shifted and there were minimal shoulder lanes for running. There was a shift from sandy to rock-strewn shoulders as nightfall approached and the temperatures dropped again. We were back to hand warmers and full winter gear. Amidst the pain of rickety legs, uneven terrain and frigid air, the sky was magical with frequent shooting stars and Orion’s Belt becoming clear. Each time I glanced into the star-flecked sky I was overcome with awe.

Around mile 105, we came upon the roughly 9-mile torture section of Sitgreaves Pass. I always enjoy the adrenaline rush that comes with the threat of falling off a cliff when you are deep into a race. James Chung, who was helping the race directors, showed up to escort me across the pass’s severe ascents and descents. Eventually, we made it to the final checkpoint at Oatman, a mysterious little ghost town surrounded by the Black Mountains that overlooks the Mojave Desert. From this point, I had one goal: to complete the last 25 miles of the race. With less than a marathon to go, my crew alternated pacing me along the course. As we made our way through the ghost town, we came to a more desolate road and it felt nice to be freed from the stress of headlights blinding us.

I felt the benefits of our Saturday night hotel break deep into the second night, when I was alert and refreshed after a 20-minute nap. My crew kept me moving forward throughout the second night. This is the true magic of ultras: the unfolding of friendships and uninterrupted time on course, all while pushing forward.

With 11 miles to go, I was overcome with emotion. Catharsis usually comes for me in a race when I know I am going to finish and can reflect on how challenging the journey has been. In part, this is what I come for—the opportunity to shift, grow, gain perspective and experience gratitude in a palpable way. After each race, I am stronger, clearer, more loving, compassionate and a better version of me. I wish I could say the finish line came fast, but it was still a long haul to get there. Daylight brought warmer temperatures and a renewed purpose to move faster as we approached Topock66 and finally crossed the finish line. 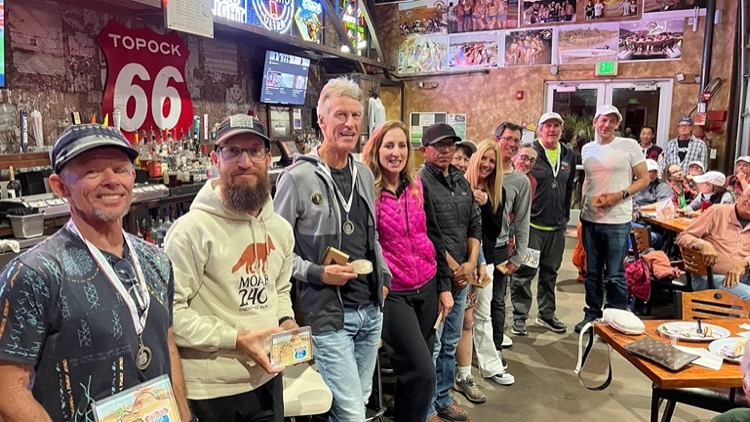 The awards dinner was hosted at Topock66 and the atmosphere was heartwarming. The Ulrich’s shared more about their plan to donate a percentage of the registration fees to the Historic Route 66 Association of Arizona in Angel’s honor because he campaigned to establish the “historic” designation in 1987, saving the Route. They also plan to donate part of the registration fees to the Alzheimer’s Association in honor of Mark (Mace) Macy. The race’s start date also coincided with Mace’s birthday, in recognition of the Ulrich’s dedication to supporting their dear friend and fellow Stray Dog racer in his battle with early on-set Alzheimer’s. 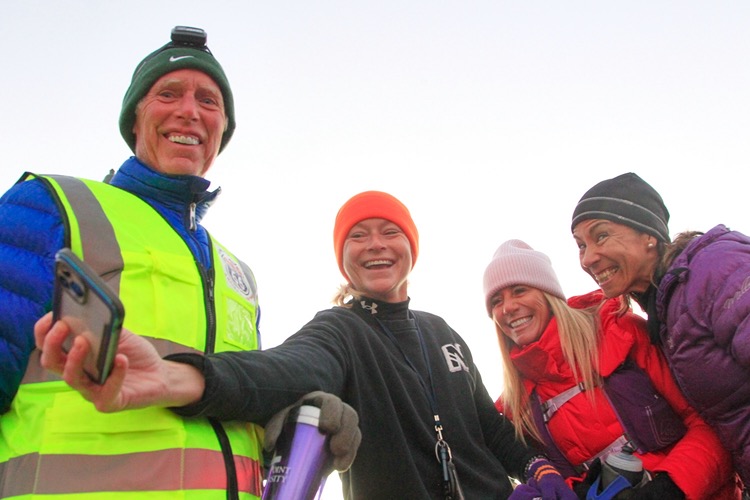 Taking in the 13 of us who finished as we held our finisher buckles and the amazing two runners who attempted to finish, I felt lucky to be in their company. While we each had our own stories and goals, we were united in our purpose and drive.

As Grant Maughan, the first-place finisher, reminded us, “We’re all weekend warriors,.” Marshall and Heather noted that they were “equally proud of first-place winner, Maughan, as they were of Mike DeLang, the last finisher, and were grateful that everyone embraced their ideal of making the race accessible for everyone.”