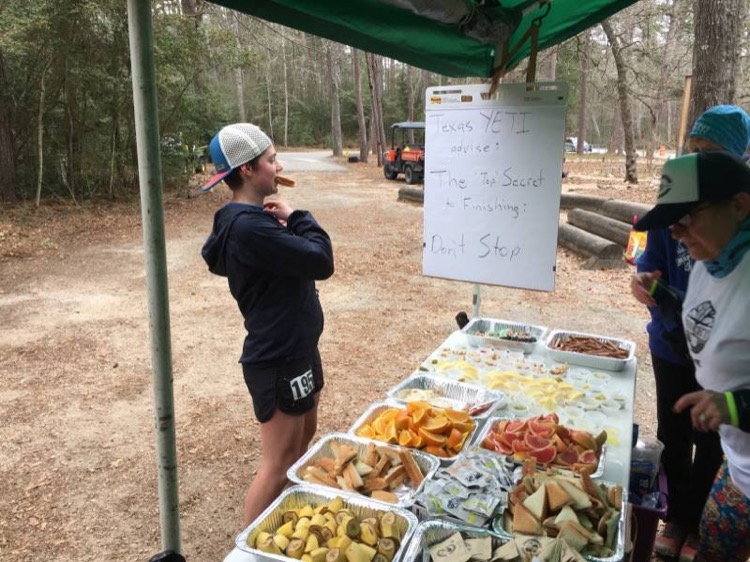 Rocky Raccoon 100, presented by Altra, enjoyed the privilege of hosting the USATF 100-mile National Trail Championships once again. This year was also very special as it was the 25th anniversary of the race. Everything changes. That seemed to be the only thing that stayed consistent this year. The forecast went from hot and rainy to dry, overcast and cool. The lead pack jostled around non-stop. The lead woman went from looking indestructible to almost stopping. It was a wild ride this year!

On into the race, one runner after another started dropping out. Zach Bitter came in with a swollen ankle without the ability to put any weight on it. Not too long after, Mario Macias, who was looking easy and joyful early on, had to throw in the towel.

Eventually, James Stewart, representing Glasgow, Scotland, fell into a steady pace and grew his lead. Although his lead shrunk and grew a few times, he did hold on for the win in 13:39:13. Ronnie Delzer found his way into second place, and ended up first for the USATF Champs (13:44:28). Matthew Urbanski wound up in third overall at 14:04:08. Mario Mendoza put together a great race, taking fourth overall and second in the USATF Championships, further proving he’s a force to be reckoned with from fast sub-ultras to 100-milers. Fifth place went to Chad Lasater in 15:28:27.

Marcy Beard after checking in the night before the start. Photo courtesy Tejas Trails.

On the women’s side, Sabrina Little went out like a tornado blasting through the aid stations and trails. But as she came through the main aid station at mile 60, she told us she wasn’t sure if she could go on. She did decide to finish it, but lost the use of her lower back muscles toward the end. She crossed the line staring at the ground, obviously (and inspiringly) giving it all she had. Her time of 16:50:01 was good enough for another Rocky 100 win. After being sick just days before, Shandra Moore held onto second overall on the women’s side at 18:16:33. Third place woman was Ashley Truan at 19:22:04, fourth place was Alison Miller at 20:14:40, and fifth woman was Chavet Breslin in 21:36:49.

Many things made this 25th anniversary race extra special, like seeing Joe Prusaitis, crewed by his wife, Joyce Prusaitis, getting his first Rocky Raccoon finish since 2002.  They had owned and directed the race from 2002 until 2015.

Joe Prusaitis, crewed by his wife, Joyce Prusaitis, after getting his first Rocky Raccoon finish since 2002. Photo courtesy Tejas Trails.

Top finishers like Urbanski came back around to cheer on those finishing up in the early morning hours. We had 10 finishers in the 60+ age range finish the event this year, including Michael Kloppy at 66 years young, with a sub-24 at 23:17:57!

To celebrate the anniversary we brought back the original shirt design with the goofy looking raccoon peering through the race name. We also started a new tradition by creating new dinner-plate sized buckles, some with “500 miles” and some with “1000 miles” on them. We allowed runners to bring me their old buckles and engraved their names onto the back of them.

We also offered first-time Rocky Raccoon 100 finishers the option to choose a “Legacy Buckle” if they wanted, to welcome them into our Tejas tribe. I brought all the old buckles that Joe had handed off to me from the last 25 years, which included a few design changes. It was fun watching delirious finishers try to make their decision as to which buckle they wanted.

All in all, this event was as beautiful as always, creating more friendships from around the world once again. There are so many people and sponsors to thank. It is such an honor to keep the Rocky Raccoon torch going.