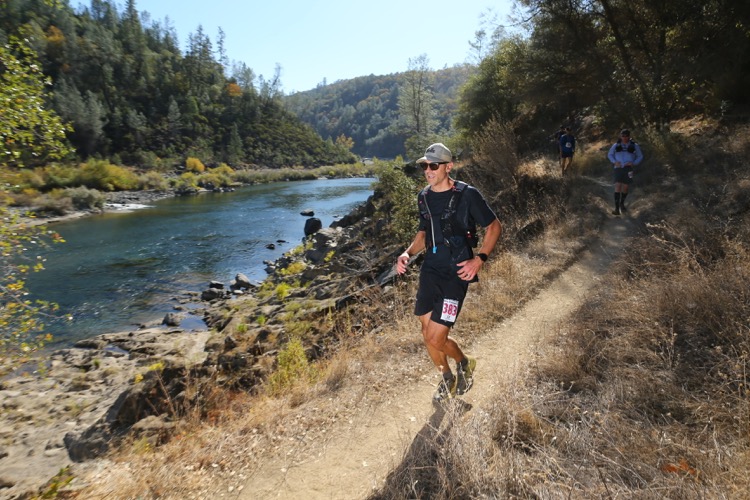 It was somewhere around 2 or 3 in the morning – the part of the night when time just drags, you can’t remember how long it’s been since you saw sunshine and you don’t want to think of how far away daybreak feels – and I still couldn’t get Johnny Cash’s “Folsom Prison Blues” out of my head.

Truthfully, I wasn’t too surprised – in fact, I had almost predicted it would happen. For music fans of a certain age and disposition (of which I am one), it’s impossible to run past the legendary Folsom State Prison and not hear the distinctive voice of the “Man in Black,” whose performances inside of this place are legendary. My race outfit was all black as an homage, and as we ran past the prison in the early morning darkness at the start of the Rio Del Lago 100, I sang verses of “Folsom Prison Blues” in step with the rhythm of hundreds of other feet shuffling along beside me. For reasons that only ultrarunners can relate to, the tune was still embedded in my brain more than 20 hours later.

Rio Del Lago (RDL) is a late-season Northern California classic, founded 20 years ago by ultrarunning legends, Norm and Helen Klein. Known as the “Jewel of the Sierra Nevada Foothills,” it combines trails from three other legendary NorCal races – American River 50, Way Too Cool 50K and Western States 100 – and prides itself on providing the laid-back vibe and VIP hospitality that old school ultrarunners find irresistible. RDL is now under the direction of longtime ultrarunner Julie Fingar who has been at the helm since 2013, and produced by the outstanding NorCal Ultras group that operates out of Sacramento. Recent editions of the RDL course have seen modifications that eliminated a multiple-loop section of trail, and the event now showcases the finest trails in the foothills while remaining easily accessible for crew and pacers. 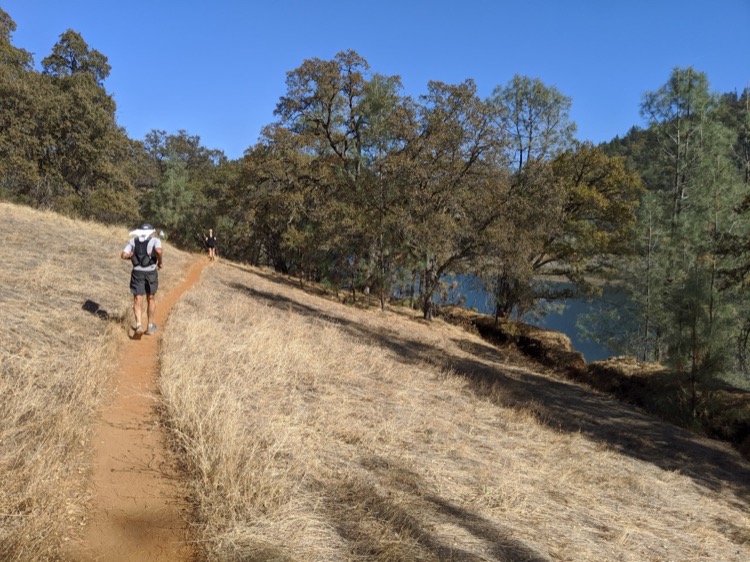 Its placement on the calendar also makes RDL an attractive option for a last-minute Western States qualifier, and a relatively flat elevation profile makes it an ideal proving ground for first-time 100-mile runners. Each year, the race averages about 125-150 first-time runners, which makes up a full third of the field. Don’t get the wrong impression though, RDL is a deceptively difficult race. Many first-time finishers this year fell short in previous years due to unexpected rigors of the course.

Yes, the first 18 miles are predominantly on an asphalt bike path. However, if you run those miles recklessly, you’ll destroy your quads before the real race has begun. Yes, the elevation profile is little more than a squiggle from miles 20-40 and 80-100… but that squiggle consists of relentless short, steep, rocky hills that wreck any hope of settling into a smooth rhythm, including one notorious stretch affectionately called the “meat grinder” by locals because of how the steep and technical footing beats up your body. Yes, autumn weather ensures that daytime temps don’t get scorching like the foothills experience in the summer, but the flipside is that you spend a lot of time in the dark. 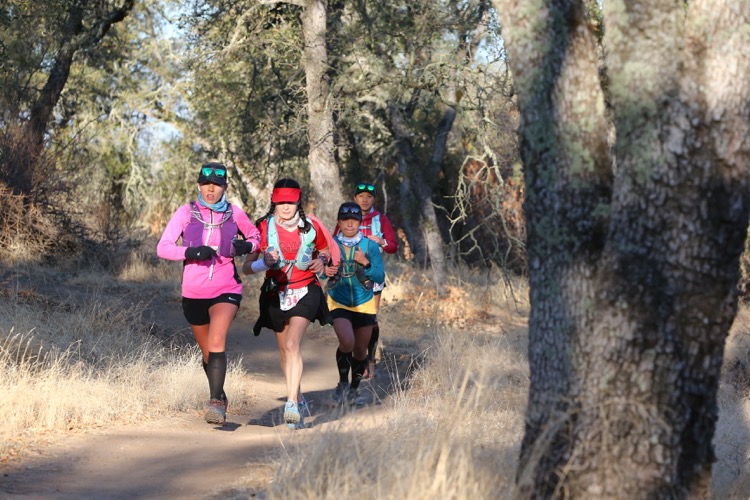 A group of runners cruise over the single track at RDL. Photo: Facchino Photography 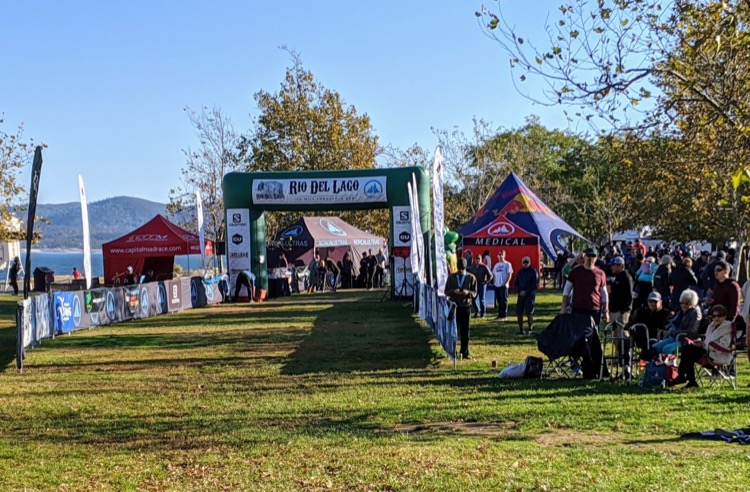 With a 5 a.m. race start, runners wear headlamps for at least two hours before dawn, and if you’re finishing in over 24 hours, expect another 13 hours of darkness during the night. I checked my watch before turning on my headlamp for the night and it was just past 6:15 p.m. Time isn’t the only thing that drags on in the darkness. For mid-packers and back-of-the-packers, the dead of night corresponds to the most difficult stretches of trail, where daytime squiggles turn into 20% grades, 10-minute miles turn into 25-minute splits, and the friendly camaraderie of the daytime turns into long isolated stretches where a lonely train whistle in the distance may be your only company.

Despite these challenges and thanks in part to first-class aid station support, runners find a way to persevere. This year, about 70% of the starters were able to finish, including 66 runners who were successful in their first 100-mile attempt. Additionally, this year’s race featured the story of one aspiring first-timer who didn’t make it to the start line, and his running partners who saw his goal through to completion.

Todd Porter was an avid outdoorsman, mountaineer and trail runner who had a longstanding ambition to run the RDL 100. In the lead-up to this year’s race which would have been his first 100-mile attempt, he lost his life in a freak accident in the Eastern Sierras, leaving behind his wife and three kids. To honor Todd and channel their own grief, Todd’s training partners from the Concord area – some of whom knew him from high school and were planning to be his pacers and crew – reached out to the race director to ask if they could run RDL in a relay format as a tribute to Todd. The five-person relay team was given special commemorative bibs for entry and en route to completing the race in under 24 hours, they all crossed the finish line together along with Todd’s wife, Heather. NorCal Ultras honored the effort by creating a custom memorial plaque for the team, who exemplified the best our community has to offer. 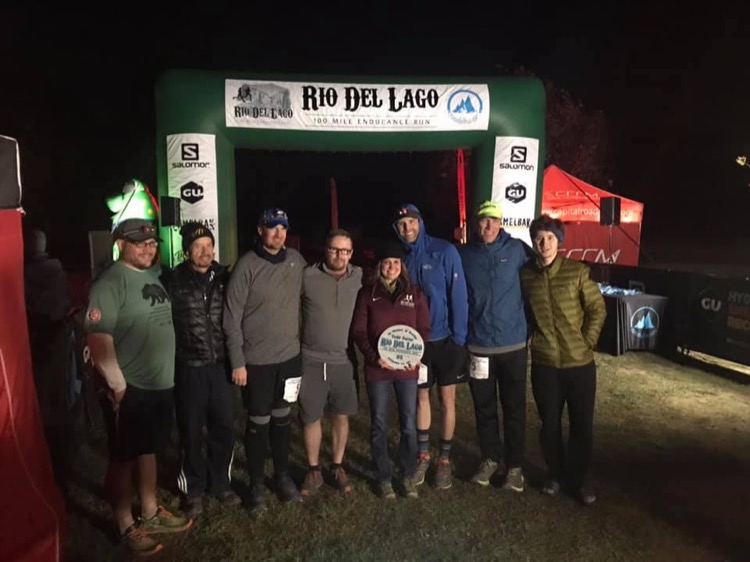 In a similar manner, Rio Del Lago itself demonstrates everything that’s great about our sport: a challenging course in a beautiful and historic setting, a friendly atmosphere with outstanding volunteer support, and a group of like-minded souls to struggle and celebrate with. And if you should happen to find yourself singing Johnny Cash songs in the middle of the night along the way, many would consider that an added bonus.

Since I’m the primary gear guy around these parts, here’s a quick rundown of the items I used to complete the RDL 100.

Shoes: HOKA One One EVO Speedgoat. Sized up by one-half for additional room across the toebox. Outstanding durability in the uppers, plenty of cushioning underfoot for rocky terrain, and solid traction in all conditions.

Shorts: Patagonia Strider Pro Shorts. Only minimal chafing after 28 hours on the trail; thanks, also, to liberal application of Squirrel’s Nut Butter.

Jacket: Patagonia Houdini Air. Evening temps were relatively mild (mid 40s), so this was all I needed. Used for three hours at the beginning of the race, stuffed in my pack until about 8 p.m., then wore it again through the next morning.

Hydration vest: UltrAspire Zygos 4.0. A great combination of low weight and high functionality. Plenty of front and side pockets to accommodate quick access items, with a 2L reservoir in back for large fluid capacity.

Headlamps: Petzl Swift RL and Reactik+. The Reactik+ was used on the first morning, and then as a backup after the Swift RL burned out after 9.5 hours of use during the night.