Perspective from the Healthcare Frontline

It turns out getting to the starting line is really the hardest part of an ultramarathon. This was supposed to be my Zion 100 race report, but COVID-19 has other plans. It has often been said that the process and training are really what matters, and that getting to run the race is just the icing on the cake. When a race gets cancelled, this is even more true. I had a DNS (did not start) when I was injured. That hurt. But I could justify it of course, no point toeing a line only to further injure myself or DNF. But it still felt like a personal failure.

I chose to run the Zion 100 back in July of 2019. I had been looking at 2020 races ever since I finished Umstead 100 (ok, maybe a week later), but also planned to put in for the Western States lottery. Zion offered an amazing course, gorgeous views, a fantastic reputation and was a WS100 qualifier. Training began as soon as I got my legs back under me in the fall.

Serious efforts coordinated by a coach and a training plan began in January. Little did I know that in Wuhan, China, the SARS-CoV-2 virus was first identified. The origin of the virus is still being investigated, but it is thought to have been first transmitted to humans from animals sold illegally at the Hunan Seafood Wholesale Market.

I’m a physician assistant in a busy emergency department. Throughout winter we had been getting hammered with high census days—lots of sick people coming in. Typical for winter months and flu season, but these are the times when we tend to look to the greater medical community to evaluate trends and concerns. By January, I was hearing reports of community spread in China. By January 20, we had a US case. By February, the urgent care and emergency department frontline medical community was fully aware of the growing problem, and our potential risks and lack of supplies and resources. I kept training for Zion. My mileages grew and time-on-my feet meant sometimes going out for a couple of (blissful) hours on the trail after a 10-hour shift in the ED. It was a perfect juxtaposition of getting myself out into the woods after these crazy shifts of seeing so many patients.

In March, we were starting to see more US spread. I shaved my “trail runner beard” down to a CDC-approved “Zappa” mustache in an effort to keep safe at work and have a good facial seal for an N95 mask. We were mostly still seeing the flu and colds—some folks clearly had fevers and cough but negative flu swabs that we chalked up to “viral syndrome.” We had limited N95 supplies so I held onto the one I had for over a week at a time (not recommended) despite multiple sick contacts.

I ran the Umstead Marathon along with multiple trail friends as a “training run” and the next day put in another 15 miles on tired (but resilient) legs with a training buddy. I committed to pacing him for his first Umstead 100 on April 4, and the RD asked me to captain the nighttime “Ptomaine Tavern” aid station, as well. Both requests were the greatest honors and I was looking forward to the whole evening eagerly, despite knowing I’d get zero sleep (good training though, right?). On March 14, Umstead 100 was cancelled.

State parks won’t allow such a large gathering as recommendations were coming down fast and furious in attempts to mitigate the coming spread of the virus. Three days later, Zion 100 was cancelled too. I had been expecting it. In the early weeks of March, it had become apparent that without significant social distancing, cutting down on large groups and avoiding excessive travel, we would not be able to avoid the dramatic spike in cases and subsequent overwhelming of medical resources seen in European countries.

What does it mean to have a 100-mile race cancelled one month out? I say that I was expecting it. I gave odds to my girlfriend, Allison, a few days prior: “60/40” and then “50/50” and then, “I bet it’ll be cancelled.” When finding out, I felt what one would expect. I suddenly felt rudderless. I lost motivation. I blew off a scheduled interval run and an incline treadmill run at the gym. My coach was understanding. So many of his clients and himself were dealing with multiple race cancellations. “We’ll regroup and refocus. Work on core.” 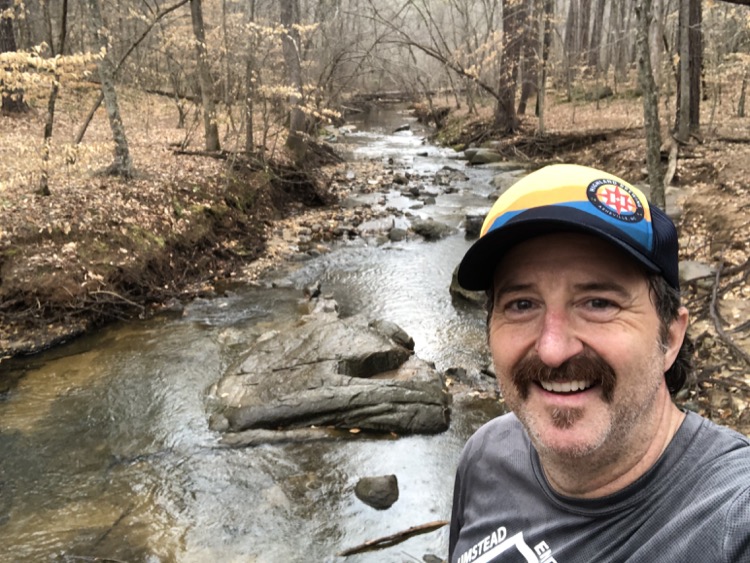 Meanwhile, the stress was ramping up. Every day at work there is new information, new concerns, algorithms and protocols changing several times a day. Supplies are inadequate. The realization that as direct healthcare providers we are now asked to ration our personal protective equipment (PPE) is a maddening concept. Every day that we were told we couldn’t get testing done raised the stress and frustration level. The looming impact, unknown in its scope, size and timing, adds to the stress and I get poor sleep.

I have an elderly father who recently moved into assisted living nearby. He doesn’t like it, but it’s the best for him. He has professionals looking out for him 24/7, and I can see him multiple times a week. Now he’s on lock-down—the facility’s desperate attempt to keep the virus from ravaging its vulnerable community. He’s safe but angry about it and feeling more isolated, and I can’t do anything about it. My mom in California is equally at risk, but at least my admonitions about distancing and staying isolated seem to be heard. She can hermit herself on her windy ridgetop and hopefully ride this out. My kids are sad about so many teenage losses: no prom, no spring break trip, missing friends, “virtual learning” using their laptops, cancellation of college placement exams, prospects of cancelled graduation ceremonies and more.

Allison tells me, “You need to go out and run.”

She’s right. The trail run becomes emblematic of what I (all of us) need to do. That is, we need to take care of ourselves. It also brings perspective. My cancelled race is just that and no more. The work I’ve done to this point has been empowering and keeps my heart up. My trail family is in this with me—we all have had our races cancelled, our pacing or volunteering duties snuffed, our big plans are no more. But the trail is still there.

I went to the grocery store, made some jokes to the cashiers and thanked them for what they were doing to help us all right now. I played games with my girls. I hugged my girlfriend tightly. I washed my dog, I did my job at work, still trying to be the voice of calm to folks far more stressed than me, finding reasons to laugh with and show appreciation to my hero co-workers. I made plans to meet a friend for a leisurely run on single track. I worry about my favorite brick-and-mortar running store, so I plan to buy myself a gift card this weekend. I definitely don’t need anything right now, but you can bet I’ll be dropping plenty of change there over the summer and fall, so why not give ‘em the money now while business is hurting?

Perspective: this virus is not in my control. The cancellation of my “A-race” is beyond my control. These are tiny compared to some things cancelled like sports tournaments that could determine a college scholarship or pro career and Make-A-Wish trips. Paychecks lost and income worries. Loved ones separated or lost to the disease. Perspective.

Finding the “awesome” out there sometimes means just doing the little things. Smiling at another person and showing others that you care. Taking care of yourself, so that you can be there for others. Just being kind to each other. Someday soon enough I’ll get to experience another fun adventure—something awesome. In the meantime, I’m gonna scratch my dog Buddy behind his ears, get some take-out to support a local restaurant, and take advantage of a couple days off before jumping back in the fray at the ED.

Thanks Drew. I’m glad I have a job to go to, and it does give me something to focus my efforts towards. Be safe out there!

Thanks Jay. Be safe.

Incredible, insightful, and zen! All in one piece.

Thanks! That means a lot.

John…so proud of you…for what you’ve done, what you’re doing…and the empathy you share with all those who have had important events cancelled. Stay well, safe, go for a run…Your Mom