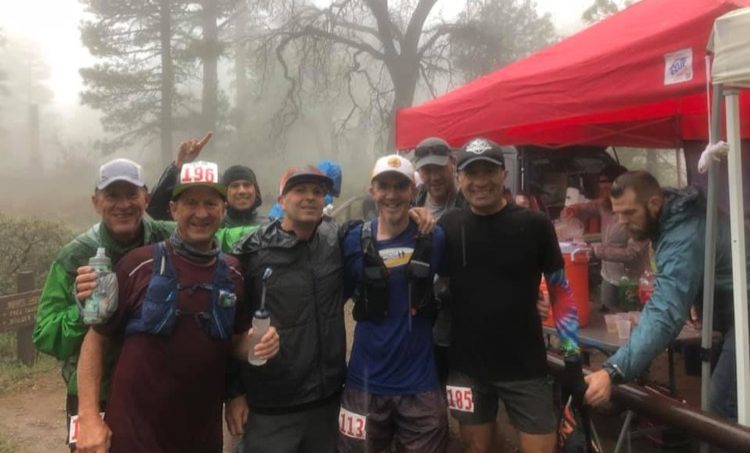 PCT 50: The Horsemen of the Apocalypse

As my mind starts to wander in the later stages of the epic PCT 50, I rack my brain trying to think of what PCT stands for. Does PCT stand for “Purple Cat Turd?” Or is it “Politically Correct Tapioca?” Maybe it’s “Propane Cylinder of Tyranny?” Of course, the actual acronym stands for the Pacific Crest Trail, a historic 2,650-mile trail that stretches from the US/Mexico border all the way to the US/Canada border. The race directors are not sadistic enough to have us run all 2,650 miles, but we did run 25 miles out and 25 miles back on a beautiful stretch of single-track trail in San Diego County, California.

The Course
Runners start at 3,100 feet in Boulder Oaks and proceed straight up the PCT until hitting a max elevation of 5,800 feet around mile 13. The next 12 miles includes rolling hills along some of the most scenic vistas around. Unfortunately, this year there wasn’t much to see as we were surrounded by clouds and fog. Ordinarily, runners would be looking 2,500 feet down into the Anza-Borrego Desert along the Sunrise Highway. The view from here will take your breath away. After running 25 miles, a turnaround is staffed by a crew of friendly ultrarunners, and runners return to retrace the 25 miles back down to where they started. Isn’t it interesting how it always looks different when you’re going in the opposite direction?

The single-track trail is hard packed, but plenty of rocks. Nothing is too technical that requires climbing, but lots of little things trip runners up. And it’s curious how those same rocks that were easy to glide over on the way up, got taller and meaner on the way back down (wink).

The Weather
San Diego has great weather, right? Temperatures average 70 degrees and sunny all year round, right? Well, travel an hour east into the mountains and anything can happen. And boy did it ever! It was about 51 degrees at the start under cloudy skies. Once we started climbing up into the mountains, things got interesting. First, we hit the clouds which was a real bummer because this stretch has gorgeous panoramic views. Then the rain came, creating some very slick conditions on this stretch of trail and Mother Nature rained down a nasty torrent of pea-sized hail that lasted for a few minutes. If it had lasted any longer, I would have been forced to put on my windbreaker.

You’d think the worst of it was over, right? After the hail, we heard the booming claps of thunder. Then things calmed down as we tackled a section with rolling hills. But on the return trip we got more thunder and rain, and then — brilliant sunshine. At the top it was probably in the low 40s but by the end, it was in the mid 60s and sunny.

Aid Stations
As is customary at any of our local races, the volunteers who manned the four aid stations (that runners hit twice), are second to none. They will greet you well before the tents and ask, “What do you need?” Like at the Penny Pines aid station (miles 23 and 27), my friends Sarah Ramirez and Jamie Chatham pounced on me like a well-drilled pit crew. They grabbed my bottles, took my trash and got my drop bag. Jamie really just took over and did the thinking for me. Sarah stuffed a dry shirt into my pack and then they pushed me out to continue my journey. Lest anyone think this was special to me – they do this for EVERYBODY. All stations are staffed with local ultrarunners who love to give back, and their enthusiasm is contagious. They’re always available with smiles and kind words to keep you motivated. Or, they’re a kick in the ass when you need to suck it up and get off the struggle bus.

The Horsemen of the Apocalypse
I was incredibly lucky to run with my friend, Rob, and his friends Dan, Mike, Jeff, Gus and Dave. The seven of us ran together the entire first 22 miles through all the fog, rain, hail and thunder. We called ourselves, “The Horsemen of the Apocalypse.” Being a group of middle-aged guys, we had a blast acting like complete juveniles, telling stupid jokes and recounting wacky movie quotes. But it made those miles go by so easily.

After picking up our fabulous medals at the raucous finish line, we were treated to a great spread of beer, pizza, rice, beans, pork and assorted goodies. The race directors, John Martinez and Vito LaBella of Pinnacle Endurance, put on another epic ultramarathon in San Diego. The course was difficult but accessible and the volunteers were plentiful and enthusiastic, which adds up to one hell of a great event.