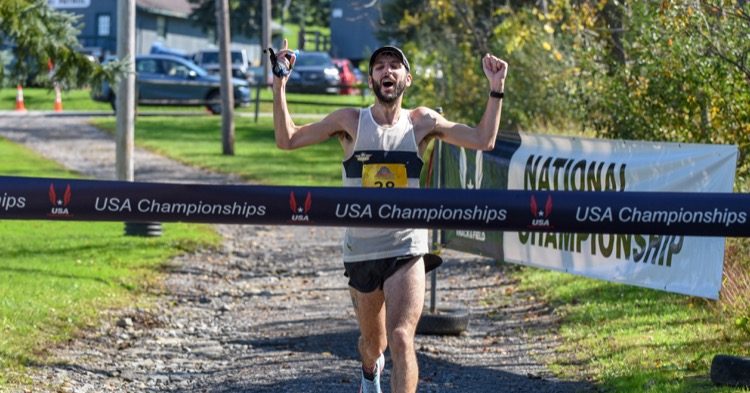 A serious pre-race fog covered the mountain as daylight tried to pry its way in before the 19th running of the Tussey mOUnTaiNBACK 50 Miler. A brief rain shower added some early coolness, but the mid-sixties temps at the 7 a.m. start crept upwards into the afternoon, challenging anyone with a foot in the game on this 50-mile loop through Central Pennsylvania’s Rothrock State Forest.

This year every runner got to experience the clockwise direction of the course, as this was the first time this race didn’t run the familiar counterclockwise route. The race also played host to the USA 50 Mile Road Championships.

Men’s title contenders included Zach Ornelas, a former 50K USATF national champion and member of the 2014 U.S. team that competed at the IAU 50K World Championships in Qatar. Will Brewster had set a course record at the 2018 John Dick Memorial 50K and finished sixth at the USATF 50K road championships. In the women’s field, Keely Henninger had placed fourth at the 2017 CCC UTMB and won the 2018 Lake Sonoma 50. Danielle Filipek won the 2017 USATF 50-mile trail championships title and led the Mountainback race last year but did not finish. Emily Collins placed second two weeks prior at the 24-hour national championships.

Ornelas and Henninger powered through to victory, but it took some doing. After a quick start and the initial four-mile climb, Ornelas led the group followed by Stephen Lobianco and Brewster, while Henninger led Filipek and Collins. A gentle rain cooled things temporarily and within two hours the fog began to clear.

Near mile 30, things got interesting. While Ornelas and Henninger extended their leads, new hills and warming temps turned up the challenge. “Either you were going uphill or downhill, really stressing the hammys and blowing out the quads,” recalled Ornelas. “I did not run that smart, I went out too fast.” Still, he posted a personal best by almost 30 minutes on this tougher course. Brewster, who has excelled at distances up to the marathon, felt light-headed and dropped out, which put Mark Thompson into third position, then Thompson moved ahead of Lobianco. The final 10-15 miles were tough, as temps climbed into the upper 70’s.

Collins, who placed fifth here last year, had previewed the first 10 miles in the new direction the day before the race. “I thought the course change would help me achieve a nice rhythm early in the race.” That turned out to be true, as she took second and covered the course 23 minutes faster despite the warmer air. “I wasn’t fully recovered because I didn’t just race, I raced it with a fever. One of these days, I’d really like to race Tussey feeling fresh!”

Henninger, who just five years ago was a biology student at Penn State when she placed second here in her first 50-mile effort, reveled in the chance to run this course again. “It was amazing to be back! Rothrock will always hold a special place in my heart. I definitely remembered the roads once I was out there and the countryside out this way is so breathtaking, especially in the morning light.”

Intent on the win, Henninger had charged at the challenge. “I started way too fast. It was so humid – I was sweaty, hot, and wet from mile two onwards. I was pretty jazzed and felt good until mile 35, then it was a shuffle toward the finish.” Henninger sensed this clockwise course was tougher as it involved more miles of climbing than the other version.

The race also includes a relay event, but the 50-miler tends to lure out a number of local runners like Doug Schunk, who got into running as a way to stay active and live a healthy lifestyle. “It helped me lose weight and become healthier compared to where I was a few years ago. I decided to take on the Mountainback because I could sleep in my own bed the night before. I’m not a fan of trails so running the roads around Rothrock was ideal, and with aid stations every 3-5 miles I didn’t have to carry a hydration pack.” Schunk also liked the interplay with the relay event. “It was nice to have relay teams drive past and cheer us on.”

Local runner David DeGroote has run the 50 miles counterclockwise before, but turning 60 this year he opted to cover 60 miles to raise funds for Parkinson’s research. He put in the first ten before the start. “Can’t sleep… can’t stop moving!” reported a smiling DeGroote afterward.

The Tussey mOUnTaiNBACK is always in October, but the race date migrates to a Sunday that isn’t on a home football weekend for nearby Penn State, and runners can find affordable lodging. Next year’s race will take place on October 27, 2019. Just for the hill of it!