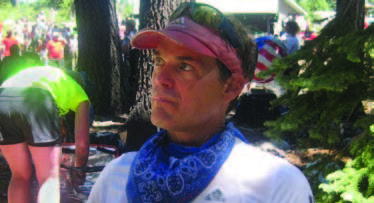 The world is roiling. Whether it’s conflict and atrocities in the war-torn areas of the Middle East, struggles for control of the Ukraine, human suffering at the hands of the Ebola virus, our own violence between us here domestically, or the heating up of our planet itself, there is plenty of bad stuff going on in this world.

But the reality is that most of our problems are “first world” – dead cell zones, lost internet access, bad hair days, our favorite team losing a close one, or maybe even DNF’ing at an A race. Being thankful for that stuff going the right way for us doesn’t really cut it at Thanksgiving.

So on the last Thursday in November we invariably touch on the big things we know we should not take for granted, the obvious things. Like the people we love – family, friends and the communities that bind and sustain us. There’s also our freedom and the general bounty available to residents of North America – the same things that brought the Pilgrims in the first place. There are also the biggies for us individually, like our health, having a rewarding job and other material comforts, like plenty of food, clothing and shelter.

But at the big meal later this month, what does it all really mean, other than giving thanks for the basics and an opportunity to gorge ourselves on turkey and all the trimmings? Other than the basics (which absolutely should not be taken for granted) what is it that we should be most thankful for in 21st century America?

Recently two very special ultrarunners passed away. They were special because of the way they lived their lives. They made a positive impact and lived every day like it was their last. You can read their stories on pages 74 and 75. They each had a huge influence on the people and communities around them, and they leave a lasting mark on the world they left behind. Their life stories make us thankful for the opportunity to live life well and make a positive impact on everything and everyone we touch, to leave a legacy that resonates even after we are long gone.

If you look beyond the surface, much of this issue weaves in the theme of thankfulness throughout, especially in the Ultralife section where Rachel Nypaver delves into running as a positive addiction, Doug Cassaro shares how taking a break can be the key to completing a life-validating long run, Dean Karnazes tells us about an inspiring young person making a huge impact and the Rocket Rants about the fun that can be had at an ultra, albeit at his expense, in his story from Leadville a few years ago. There is just so much to be thankful for, but the opportunity to live every day like it’s our last while making a positive impact on those we touch, is something we can all give thanks for later this month, and also embrace every day of the year.

Here’s to our long runs,