Since they were first introduced in 2016, Nathan’s VaporKrar and Howe packs have become somewhat ubiquitous on the trails for training and racing. Built in collaboration with Rob Krar and Stephanie Howe Violett, the lineup offers a minimalist option for traveling light, and a larger pack for longer durations or conditions that require a greater assortment of clothing and gear. 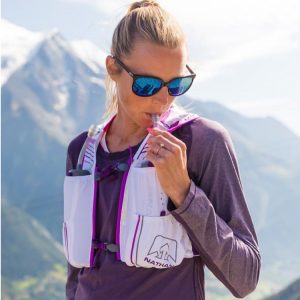 Drink on the go without removing flasks

Updates to the packs this year are fairly consistent across all four models (Krar and Howe, 4L and 12L), with only a few points of distinction between the men’s and women’s styles. The most obvious and most welcome change is on the front pockets, which are now large enough to accommodate 20oz soft flasks; the 4L packs come with two 20oz flasks, in comparison to 14oz flasks on the original versions. The straws on these new flasks are a couple of inches longer than the 14oz versions, making them easier to drink from on the go without needing to remove the flask from the pocket. With increased fluid capacity, you’ll also notice increased bouncing up front, and the long plastic support piece on the back of the flask which prevents it from collapsing (a great feature) rests lower on the rib cage than it used to, which is a potential source of friction.

In addition to the flask pockets, other pockets on the Krar and Howe packs have been upgraded also. We were most excited to see a water-resistant stash pocket on the back side of the front left strap on all four models, but in practice this didn’t quite live up to expectation, as there was still a decent amount of moisture that permeated the barrier and made our phones damp on moderately long (1-2 hour) runs. The 4L Krar and Howe packs also have a water-resistant upper rear compartment, as well as modified access to the most external rear compartment with a new full-length vertical zipper. Our primary complaint about the pockets is that many of the front storage areas have only a small Velcro tab for closure instead of a cord or elastic; this helps to shave weight, but proves difficult to seal if the pockets are stretched to capacity.

Minor changes to the packs are new color schemes for each model, as well as the addition of spirit animals for Rob Krar and Stephanie Howe Violett on their respective packs. Aside from the similarities above, here are some distinguishing notes about the 4L and 12L versions.

As mentioned, the principal upgrade to the 4L packs is increased fluid capacity in front, but the real advantage of these packs is their ability to accommodate fluid reservoirs in the back just as easily. The official specs indicate that the Krar and Howe 4L packs can fit a 1.5L reservoir in the designated compressed mesh bladder pocket, but in our testing we were able to use a 2L bladder in the main compartment without problem. (A reservoir is not included.) This layout gives you the flexibility of carrying fluids in the back if you prefer, or in addition to your front flasks for maximal hydration capacity in a very minimalistic pack. 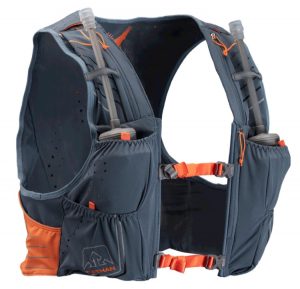 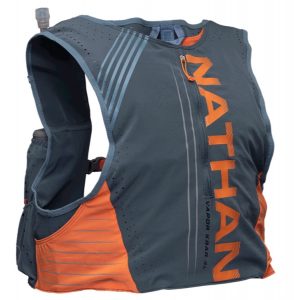 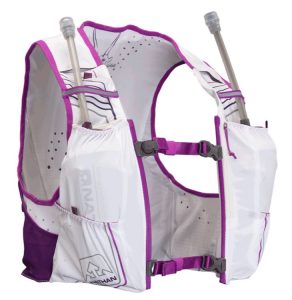 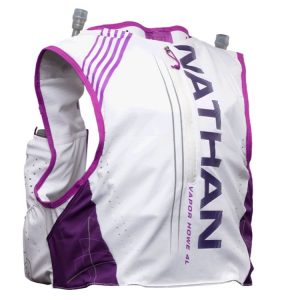 Another significant change to the 4L vests is the elimination of the side adjustment straps that was a source of potential confusion for users of the first models. The original intent of the side straps was for bladder and pack compression, but many runners tried manipulating these for size and fit adjustment, which proved unsatisfactory. The new packs remove these straps and are provided in multiple size options – five for the Krar 4L, six for the Howe 4L – and rely solely on the form-fitting stretch material and sternum strap adjustments for proper fit. The material is supposed to have a shirt-like feel, and it does rest quite naturally and softly against your body. The drawbacks are that it doesn’t ventilate as well as open mesh straps, so the pack rides warm against your skin on hot days.

The color scheme of the Howe 4L is a vibrant white and purple combo, and on high mileage outings, the white color gets significantly dirty. We also found some mild bleeding of the purple color into the white with extensive use and washing. 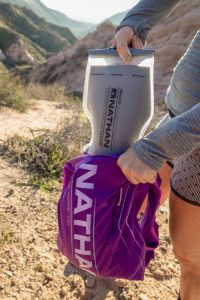 The 12L vests have the same front pocket configuration as the 4L versions, but do not come with soft flasks. Instead, they have a new insulated hourglass-shaped 1.6L bladder that is innovative in two ways: 1) the thin insulation keeps fluids cooler for longer by resisting heat from your body or direct sun, and 2) the hourglass shape reduces sloshing at high speeds. This does result in a slightly reduced capacity compared to a standard 2L reservoir, but a regular 2L reservoir fits easily if that’s your preference. The bladder tube attaches securely to the front of the pack with a magnet and can be removed from the bladder with the press of a button. 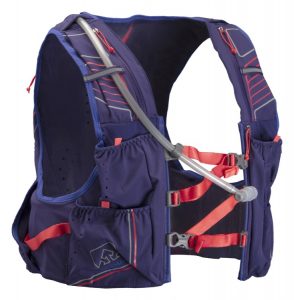 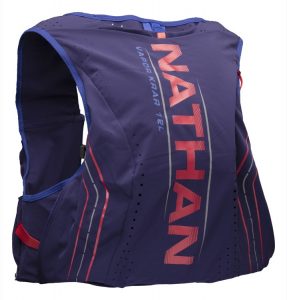 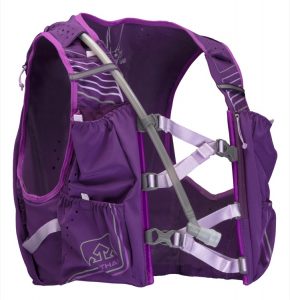 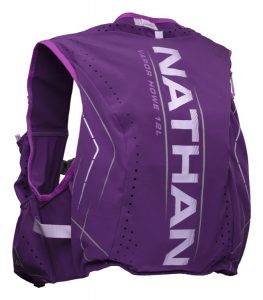 Storage on the back is extensive, with two large cargo compartments and a stretch mesh kangaroo pocket. Because cargo loads can be larger and heavier than in the 4L packs, the 12L versions retain the compression strap system to tighten the load against your back for stability. As mentioned previously, these straps are not to adjust the overall fit of the pack, so these 12L versions also come in five sizes for men and six for women.